Lehava, the right-wing, anti-miscegenation group whose main activity is to incite against Arabs as a way of dissuading Jewish Israeli girls from dating them, has taken its incitement beyond intermarriage and into the realm of security.

A new poster on its Facebook page encourages Israeli soldiers to act trigger happy when it comes to Palestinian protestors. It reads:

Soldier! Stones and firebombs can kill you! Do you feel your life is in danger? Pick up your weapon and put a bullet through the murderer’s head. It’s better to sit in jail than die. ‘Kill or be killed’ [quote from Sages] IDF soldiers and Border Policemen, the Israeli people love you and embrace you. 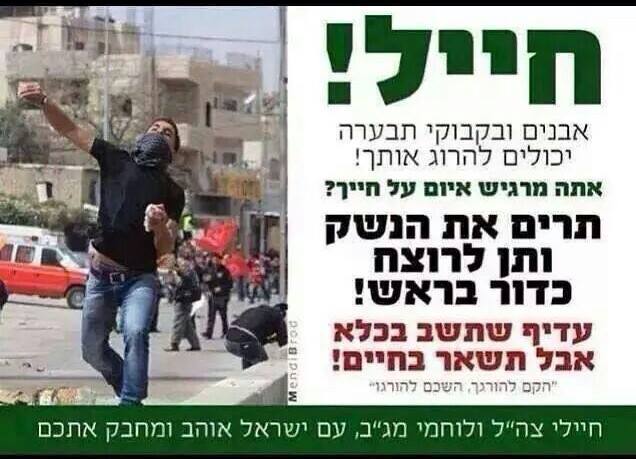 This comes just one day after an Israeli policeman shot and killed 22-year-old Khir Hamdan in the village of Kafr Kanna after he attempted to attack them with a knife, but did not appear to pose any direct threat to their lives, leading to accusations the police shot him in cold blood and lied about it.

The Lehava poster effectively weighs in on the matter, defending the police and sending the message that when in doubt, soldiers must forget protocol, forget the law, and simply shoot to kill. My question is, what is a group that claims to be committed to preventing intermarriage doing getting involved in this issue? The answer seems clear.

They are following in the footsteps of both Public Security Minister Yitzhak Aharonovich, who essentially endorsed the extra-judicial killing of murder suspects, following last week’s terror attack in Jerusalem, and Economy Minister Naftali Bennett, who defended the police action, saying Hamdan was a “frenzied Arab terrorist.”