If a campaign ad inciting against Arab citizens of Israel is deemed illegitimate, then why not the party responsible for it, or any of the myriad Knesset members who have also engaged in similar forms of incitement as well, whether against Africans, Palestinians, the LGBT community or Israeli leftists?

Israel’s Central Election Committee disqualified an ad campaign last week by a new party called Otzma Leyisrael (Strength to Israel), citing that it singles out and incites against the Arab sector in Israel and is therefore racist. The campaign ads, posted on buses and billboards across Israel, included the word “loyalty” in Arabic, with a Hebrew caption underneath that reads: “Because without duties there are no rights.” 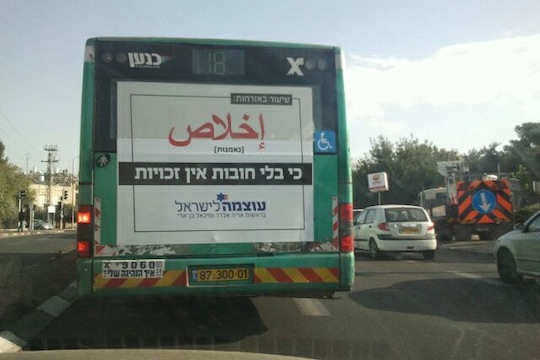 The decision by committee chairman Judge Elyakim Rubinstein was made after a group of civil rights activists, including Meretz MK Mossi Raz, filed a complaint with the committee. One of the petitioners, Ela Greenberg, told me, “none of us did this as an organization or with organizational backing. We are just private citizens and this was for me an exercise in realizing that we do have some power and influence and we need to use it.”

The ad is not surprising when you consider the people behind it. This new party is comprised of violent, hyper-nationalist, xenophobic, Jewish supremacist settlers. Its members are the ones behind the periodic anti-African rallies in south Tel Aviv, the anti-Arab rallies in Umm al Fahm and are responsible for countless incidents of incitement against Palestinians, asylum seekers and Israeli leftists. If anyone is interested in their latest hate speech, here is a video of an anti-African “Hannukah rally” they held last week in Levinsky Park:

Party chairman, Ayreh Eldad, who lives in the settlement Kfar Adumim (close to the E-1 area), made his policy on asylum seekers clear last summer when he said, “Anyone that penetrates Israel’s border should be shot, a Swedish tourist, Sudanese from Eritrea, Eritreans from Sudan, Asians from Sinai. Whoever touches Israel’s border – shot.”

The party’s number two, Michael Ben-Ari, is a former member of Meir Kahane’s outlawed Kach party (banned in 1988 for incitement to racism) and has become well-known for acts such as defiling a New Testament all MKs were given a gift, as well as calling on the IDF to shoot border infiltrators in the head.

The number three in the party is Baruch Marzel, an American-born settler from Hebron, who I have seen assault Israeli left-wing activists with my own eyes (never been tried) and who is an equal-opportunity bigot, having expressed contempt not only for Arabs, Africans and Israeli leftists, but for the LGBT community as well.  The party list also includes Aryeh King, one of the primary operatives behind the Judaization of East Jerusalem, who runs the Israel Land Fund.

Once you understand who these men are (to the best of my knowledge there is no woman on their ticket), what they have done in the past and what they are capable of, the banned ad campaign targeting Arabs looks like a relatively moderate speck in a much more fundamental and ominous problem. The Association for Civil Rights in Israel (ACRI) issued a statement following the banning of the campaign arguing that “isolated disqualification” is not the solution because “racist speech that severely harms minorities has been legitimized in the current mainstream political discourse.”

Indeed, what could be more evident proof of the institutionalization and normalization of bigotry and fascism in Israel the presence of such a party, some of whose members already have an office in Israel’s Knesset? And It doesn’t stop with this party. MKs from Likud, Kadima and Shas have all gone on record making racist and incendiary statements against either Africans or Israeli leftists, or both.

And let’s not forget about (former) Foreign Minister Avigdor Lieberman and his party, Yisrael Beiteinu. Otzma LeYisrael was not the first to propose conditioning the rights of Arab citizens of Israels on the  notion of “loyalty” to the Jewish state. After the campaign was banned last week, MKs Aryeh Eldad and Michael Ben Ari noted  that it could not possibly be racist, as Yisrael Beiteinu’s campaign slogan in the previous election, crafted by Lieberman himself, had pretty much the same message: “No loyalty, no citizenship.” Israel’s Knesset even approved the “citizenship law” in March 2011, proposed by Yisrael Beiteinu, which gives the Supreme Court the power to revoke citizenship from citizens convicted of treason, espionage and terrorism. At the time, even Israel’s Shabak (General Security Service) warned there was no need for the law, and that its purpose appeared to be the delegitimization of Arab citizens.

So the question remains: If this ad campaign is deemed illegitimate, then why not the Otzma LeYisrael party as well (which is essentially the reincarnation of the outlawed Kach party)? Why not Yisrael Beiteinu’s platform and the bill they pushed through Knesset? And why not all the MKs from various parties who have engaged in incitement or slander?