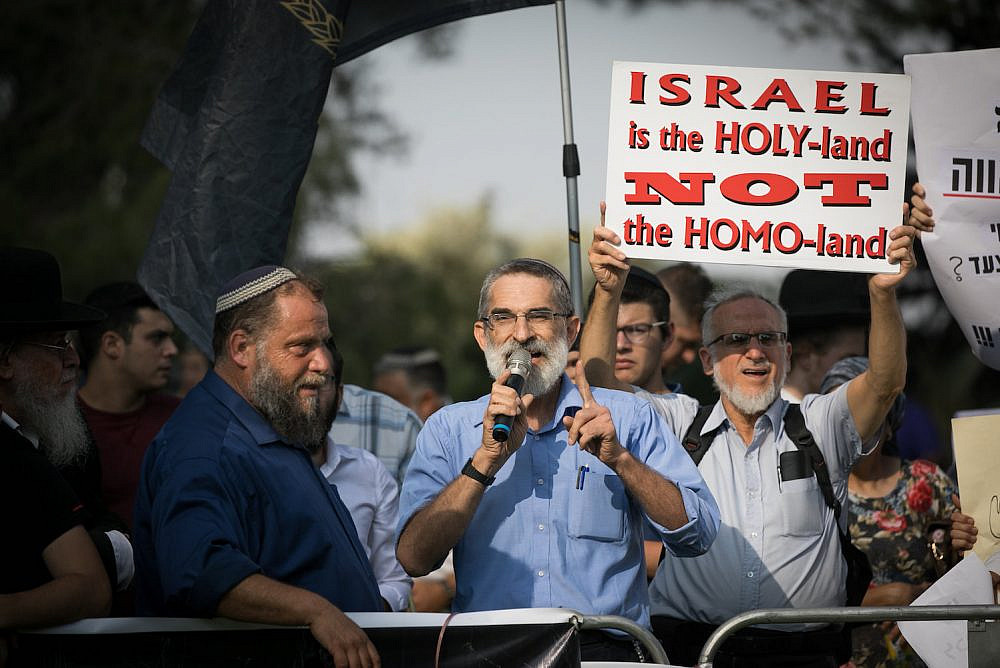 A few years ago, having just arrived in Israel-Palestine for a research trip, I was in a cab heading from the airport to Tel Aviv when we drove past a huge billboard in Hebrew reading “Father and Mother = Family,” and underneath, “The courage to be normal.” It happened to be Pride month, although the vast majority of tourists who travel to Tel Aviv for the occasion each year — and who will almost certainly have driven past the same sign — will not have understood what they were looking at.

Many such posters were on display around the country at the time, part of a homophobic campaign by an organization called Hazon (“Vision”), whose members co-founded the anti-LGBTQ Noam party — which now has a sitting Knesset member in Avi Maoz, who is also a deputy minister in the Prime Minister’s Office. Maoz has, understandably, been the focus of most of the fears surrounding just how bad Israel’s governing coalition is going to make things for the queer community — not least because his new responsibilities include control over external programming in schools. But leaked comments by his electoral running mate, Religious Zionist Party head Bezalel Smotrich, are a reminder that the threat the new government poses to LGBTQ people is coming from multiple directions, including some of the most powerful people in office.

In the recording, made within the past few months, Smotrich can be heard boasting to a supporter that, essentially, no matter what he does to the LGBTQ community, he will not lose voters as a result. Why? Because those whom he deems his base, observant Mizrahi Jews, “don’t give a damn [about ‘gays’].” Moreover, he continues, his biggest asset as far as his voters are concerned is his anti-Palestinian track record — specifically, his refusal to sit with the Islamist Ra’am party that was part of the previous governing coalition.

In many ways, Smotrich’s comments merely reaffirm what is already common knowledge. We know he is a committed homophobe. He broadcasts that fact himself; it’s part of the Smotrich brand — from protesting against Pride parades and calling them an “abomination” to declaring himself a “proud homophobe.” His level of malice toward queer people is illustrated perfectly by the quid pro quo he proposes in the leaked recording: “I won’t stone gays [to death], and you won’t force me to eat shrimp.” The right to keep kosher and the right to be spared a violent death are, apparently, on equal footing.

We know, too, that anti-Palestinian racism — the vindictive, persecutory kind that celebrates its own violence — is the core value that unites most of the parties in power, and which animates a good deal of their voters. Smotrich understands this well, which is why his assessment that he can do what he likes to other minority communities is almost certainly accurate, so long as he hits Palestinians the hardest of all.

Yet it is telling that Smotrich chose to project this calculus onto the Mizrahim in his constituency, given that no group in Israeli-Jewish society has a monopoly on anti-Palestinian hatred, and given that his more traditional base, who hail from the mostly Ashkenazi religious-Zionist elite, has been leading the obsessive culture wars against LGBTQ people in recent years. Perhaps this is just Smotrich’s way of signaling he has broadened his appeal, even as he has chosen a predictably racist illustration to do so by claiming it is Mizrahim above all who are governed by their hatred of Arabs.

Whatever Smotrich’s true motivation behind his comments, one thing is clear: the Israeli far right’s fixation with the queer community is in the process of escalating from social incitement campaigns to institutional harassment and potentially persecution. This combined approach has always informed Israel’s oppression of Palestinians. But as history has repeatedly shown us, a state designed to eject a particular group from its midst will never stop designating new targets. Alongside wondering how much worse it is going to get for those in the far right’s crosshairs, then, is another urgent question: who’s next?