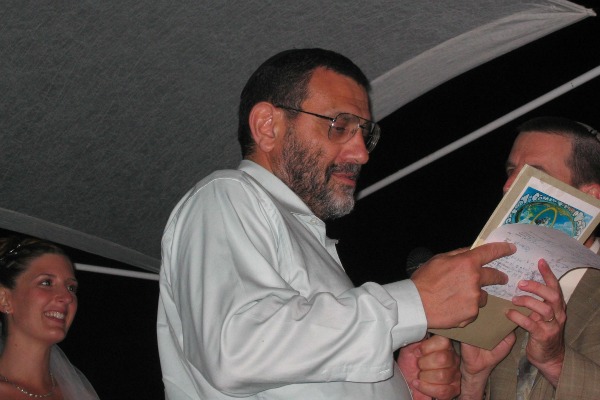 September 11, 2001. I get off the bus from northern Tel Aviv that takes me to 21 Shocken St., where the Haaretz building is located. As I enter the doors I’m greeted by a colleague from the Hebrew news desk, who says “Wow, you’re going to have quite a shift.” I was night editor of the English edition of Haaretz at the time.

“You didn’t see? A plane just hit one of the World Trade Center towers.”

I ran to my office, saw other staff members staring in awe at the television screens, and turned on my TV. I got there just in time to watch the second plane hit.

I started to tremble, and immediately picked up the phone to David Landau, editor in chief. “Did you see what’s going on?!”

“Seriously, when are you coming?”

“You’ll be fine. Call me if you need anything, I’ll help from here.”

We were both right. He was crazy, and I was fine. I put out a good paper, and got it sent on time.

David Landau, who passed away yesterday due to an illness, was my first mentor in journalism. He was my boss, my teacher, my friend. He was this to many people, so influential a person to the lives and careers of dozens, if not hundreds.

Already, much has been said about him since he passed. To fully grasp what a special man he was, I sincerely recommend reading the beautiful obituary written by Anshel Pfeffer here, and the very moving farewells from his two colleagues Gideon Levy here, and Chemi Shalev here. They have portrayed much more beautifully than I ever could the complexity of David, his life story and amazing accomplishments, his few minuses and hundreds of pluses.

As many do, I also remember my first encounter with David. It was my interview for an internship at the Haaretz English edition he had just founded about six months earlier. I’ll never forget his first words to me as I entered his office:

“Well, that’s a horrible shirt to wear to an interview.”

In retrospect, it was. For some odd reason I was wearing a bright orange short sleeve button down shirt.

This wasn’t to be the last time David critiqued my attire. On my wedding night, after shaking my hand I asked him if he liked my suit. “No, you look like a bar mitzvah boy.” He was right again, actually. It was a flashy blue disco-style suit. In all the farewells to David you’ll see mentions of his odd (or non-existent) tact, but I’ll bet you’ll never see this compliment: the man had style.

David managed to put his fashion taste aside and decided to hire me as an intern, where I made NIS 80, around $20 (a shift!). But I got my foot in the door of one of the most respectable broadsheets in the world.

He began to teach me. As my confidence grew, the Hebrew edition picked me up for a few years as a copyeditor on the news and foreign news desks. But David brought me back to the English edition later to be his night editor, and that’s where the real Journalism 101 began.

After every paper I sent, we would sit the next day and do a post mortem. And boy, were they lethal. Much has been said about his rumbling and intimidating voice, and it was those post mortems where I got the brunt of it. Sometimes I would get it by phone early in the morning, because he simply couldn’t wait to scream at me at the office.

But as time went by we grew very fond of each other. Fond enough that I felt I could scream back at him. We used to have screaming matches on the phone during the shifts, all in good fun. I think he might have enjoyed the fact that I had a short fuse like him and gave him a taste of his own medicine every once in a while.

I remember one staff meeting, where I was enraged that I had been doing the Saturday evening shifts non-stop, because the only other night editor was religious and kept the Sabbath. David said there was nothing to do about it, and in front of everyone I yelled “You fucking dossim!” (a somewhat derogatory term for orthodox Jews). Everyone’s jaws dropped to the floor, except for David’s, who just grinned at me, black kippa and all. I grinned back. We were on the same page; he totally got my screwed-up humor.

And how can anyone forget those newsroom antics of his. How can anyone forget him, as you’re sitting for hours on the wording of a headline for the front page in front of a Mac and he would shove you over and grunt “Let me do this!” And this man, one of the most amazing journalists I’ve met, the first Israeli to interview Sadat, would hunch over the keyboard with his enormous hands and type with only his index fingers at the speed of a snail! One could only wonder how he managed to write so many books.

As I read the farewells on Facebook, it was such a pleasure to read my former colleagues reminisce and tell some of the classic David stories.

There was the well-known, daily and almost hourly roar, “Send the fucking page!!!”

Some other gems: “Is there a bunch of fucking monkeys working on this site?”

“Who translated that article?” I did. “Into what language?”

“Fucking useless? Who wrote this shit? What the fuck do you think you’re doing?”

And more, and more. One colleague reminded us of how David used to boast that he was the first and hopefully the last night editor in the Haaretz Hebrew edition to ever publish the same story twice on the front page. It was an Akiva Eldar piece, one above the fold, and the same exact one below the fold.

Another reminded how anxious he would get every Thursday afternoon, as he would have to write the Friday Haaretz editorial. He’d be there, sitting in the dark, door closed, with only his little desk lamp on and type away in Hebrew with his huge index fingers.

Needless to say, some people didn’t always get David. And I can understand that, it took me a while, too. But once I did, I was hooked. Both me and my wife to be, Karen, who also worked under David and also developed a strong relationship with him, decided on our wedding day to honor him (and us) with one of the seven blessings. Whenever we needed a reference letter from him during our careers, he would always oblige, but add “how many more times am I going to have to tell lies about you people?”

David continued to mentor me when he was appointed editor in chief of Haaretz, and brought me back to be his night editor in the Hebrew edition as well. Those years at the desk with him were the most exciting and demanding in my days at Haaretz, covering the Gaza disengagement, Ariel Sharon’s stroke, and more.

Even after I left Haaretz, David continued to affect my career. I don’t think it would be far-fetched to say that there would be no +972 Magazine without him. One of the main reasons we founded the site was to fill in the gap that the English Haaretz and Jerusalem Post could not fill when it came to telling the full story of what is happening on the ground in Israel/Palestine.

And although I know very well +972’s politics are far from David’s, I think he would be proud of what my colleagues I are doing on a daily basis: good, solid journalism with a (large) pinch of our ideology. Even though I haven’t made one shekel from the five years this site has been around, it is the journalism I am most proud of – and I think David would be proud of that too.

It’s David who stuck me with the journalism bug, back then when I wore that orange shirt in his office. Since then I’ve left journalism a few times, in search of a better salary in this difficult land, but I always come back. I always leave one foot in the field. I’ll always be a journalist at heart.

And there’s only one person to blame for that. One of the smartest, warmest, funniest, caring people I know.

I love you, and miss you loads.