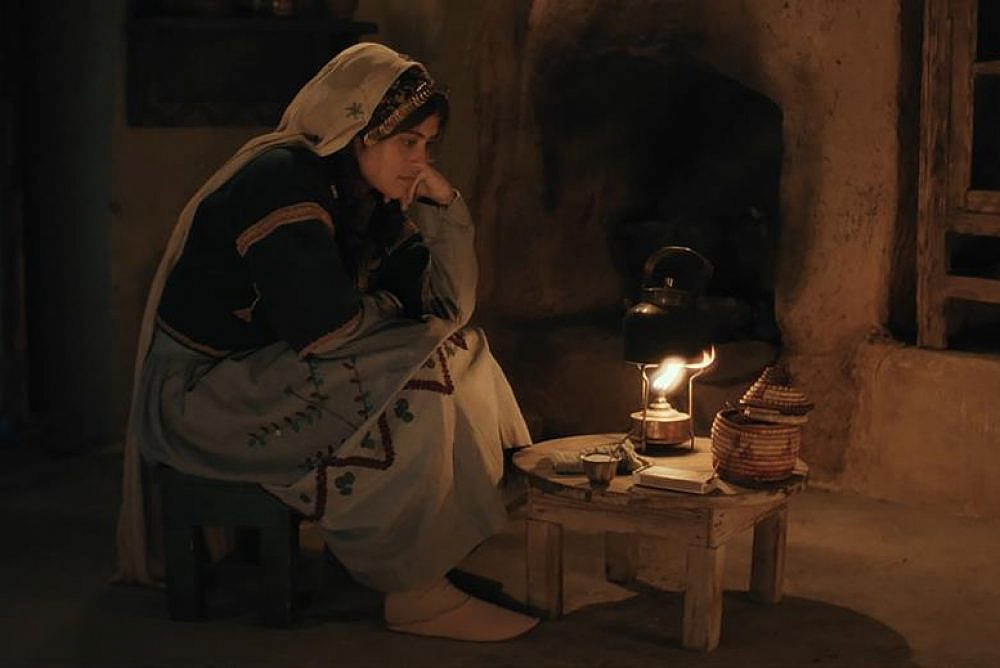 A still from the movie "Farha," directed by Darin J. Sallam. (Talebox)

“Farha,” director Darin J. Sallam’s new feature film about the Nakba, was recently released on Netflix to both applause and outcry. The story of a Palestinian girl who witnesses and survives the catastrophic events of 1948, its release led to former Israeli Finance Minister Avigdor Liberman demanding that the film be taken off the streaming service, while Israelis posted publicly about canceling their Netflix subscriptions.

Liberman accused “Farha” of disseminating a distorted image of the Israeli army, and of misrepresenting the facts about what happened in 1948. The former minister is wrong, of course, and is merely parroting the same hasbara lines that appear whenever Israeli military abuses are portrayed onscreen. But the film, in the vagueness with which it portrays Farha’s relationship to the Nakba, diminishes its message — and in many ways is a step back for Palestinian cinema.

The film’s titular protagonist, Farha (“Happiness”), is a 14-year-old girl with a burning ambition to break free of her small Palestinian village and reach the city to pursue an education. But her hopes are dashed when Zionist militias invade her village during the Nakba, trapping Farha (played by Karam Taher) in a food storeroom for several days of darkness. Farha is forced to witness the horrors outside through a tiny hole in the wall — men rounded up by the militia, a Palestinian collaborator with a burlap sack over his head leading the militia, and an entire family executed by a firing squad, leaving behind an infant. The film is based on the testimony of a Palestinian woman who survived the Nakba, escaped to Syria, and shared her story with director Sallam’s mother.

Sallam’s decision to leave Farha and her life in obscurity prevents the viewer from fully comprehending the world in which Palestinians lived prior to the Nakba, a world that was robbed from them. The “city” in which Farha yearns to carry on her studies is unnamed, and in Sallam’s portrayal, Palestine could be any other country in the Arab world. Farha, a brave and conscientious girl who desires to delay her marriage for the sake of studying and setting up a school in her village, could be a girl from any nation in the region. Even the inclusion of some dialogue in Hebrew and a Star of David on the military uniforms of the occupiers does not give us a complete understanding of the devastating effects the Nakba had on the lives of the Palestinians.

After watching, I asked myself why “Farha” avoids explicit labels. Does Sallam fear being direct and speaking openly about the setting of the events? Did she intend to humanize the Zionist soldier by depicting him crying, and deciding not to kill an infant? Is peeking through the peephole a symbol of Palestinian helplessness or being a living witness? 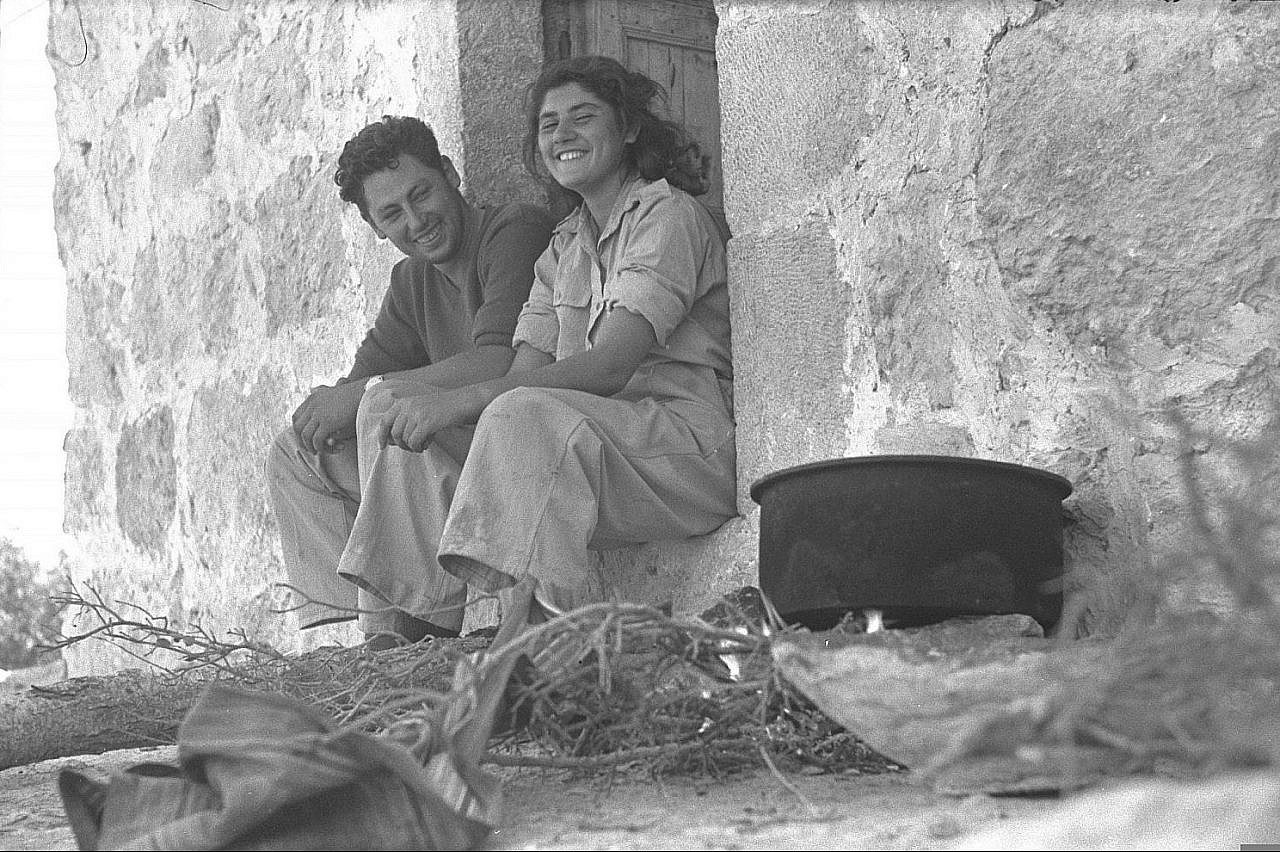 Palmach soldiers sit in the entrance of a building in the depopulated Palestinian village of Bayt Nattif, near Jerusalem, October 1948. (GPO)

Each second we see on the screen is the director’s message, and choosing the Nakba as a topic is brave at a time when very few deal with the Palestinian catastrophe in cinema. And yet, I see a significant failure in defining that message. “Farha” leaves the audience with difficult emotions, rather than prodding them to think about the consciences and the future of Nakba survivors.

At the heart of the struggle against Zionism

For more than seven decades, Palestinian cinema has been at the heart of the struggle against Zionism and the occupation. The Palestine Liberation Organization (PLO) recognized the power of cinema and its potential to document history and shape public opinion, so it founded a film unit in the 1960s that brought together talented photographers and directors, both Palestinian and non-Palestinian.

The unit produced a number of films that remain a vital source of inspiration and knowledge for the study, practice, and evolution of Palestinian cinema; and despite all of the immense challenges, the ongoing production of Palestinian films provides a glimmer of hope to a people who have been exiled for three-quarters of a century and subjected to military rule for more than 50 years.

In this context, the desire to direct a film about the Nakba is a powerful call to action — one that cannot and should not be ignored. It is a challenge that must be taken up by Palestinian directors of today, a call to step beyond simply choosing an attractive topic that is embraced by Arab or European financiers, and one that promises high viewership rates associated with popularity and public support.

What, then, can directors learn from previous cinematic representations of the Nakba? How can they use the medium of film to tell the story of the Nakba in a way that will not only capture the attention of audiences, but will also inspire and move them to action? 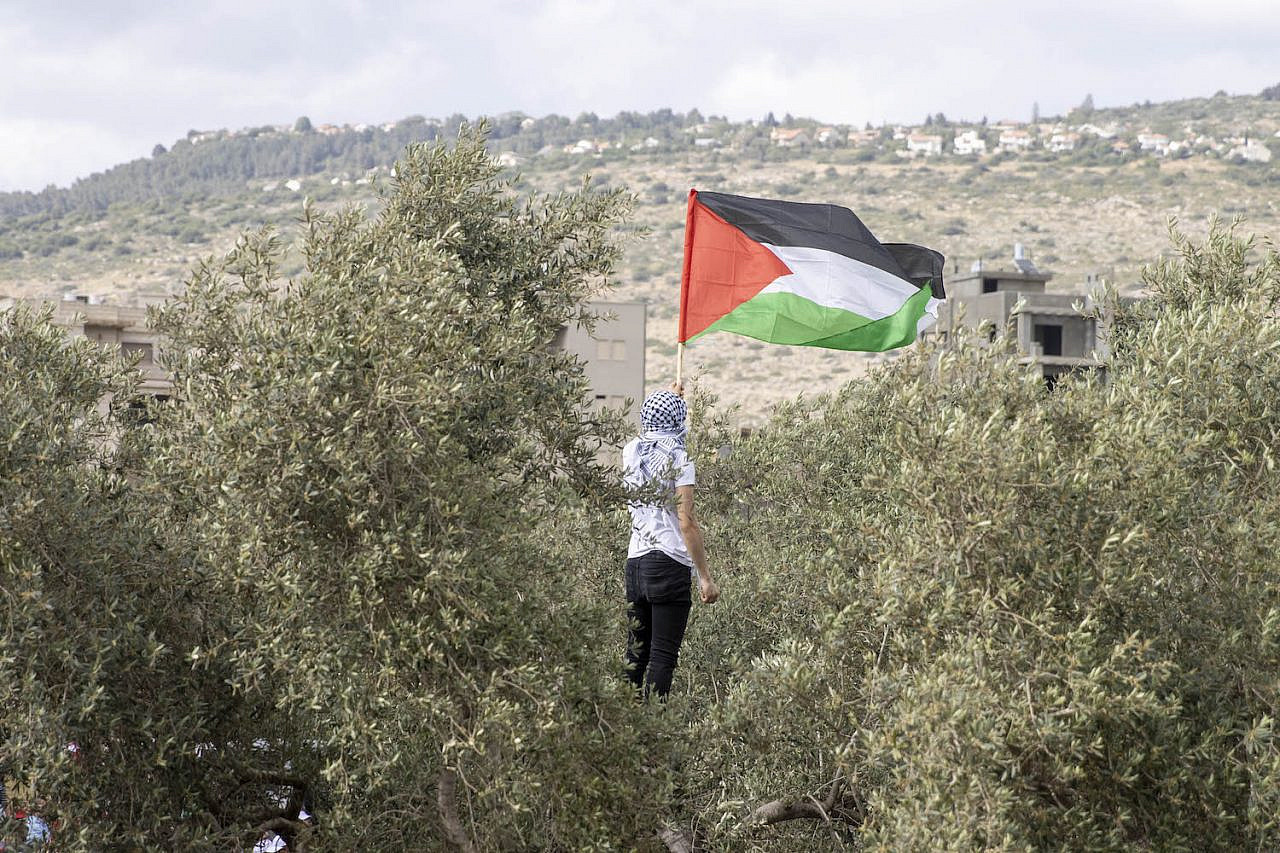 A participant in the annual March of Return holds a Palestinian flag in the depopulated village of Mi’ar, northeast of Haifa, May 5, 2022. (Heather Sharona Weiss/Activestills.org)

Palestinian cinema has produced numerous examples of films that effectively portray the Nakba, with the specificity needed to communicate how much Palestinians lost. Director Michel Khleifi, for example, represented the Nakba and its repercussions for Palestinians by making a powerful contrast, suggested in the film’s title: “Ma’aloul Celebrates Its Destruction.”

This 1998 short shows a dialogue between Khleifi and a displaced resident of the depopulated village of Ma’aloul, in which they discuss the latter’s relationship to the 1917 Balfour Declaration, the British government declaration that announced support for a Jewish homeland in Palestine. The clash between the fate of the village and the emotions of its displaced people as Israeli Independence Day celebrations take place is thrown into stark relief.

Elia Suleiman, the acclaimed Nazareth-born director, portrays the Nakba in his films with unparalleled clarity and directness. In “The Time That Remains,” he uses masterful storytelling to emphasize the legitimacy of armed resistance, crafting a narrative that bridges the past and the present, and which accurately reflects the experiences of those Palestinians who have remained in their land. In his other works, Suleiman adds to this narrative, imbuing it with symbolism that calls on the viewer to understand the full context of the conflict. The director sends a powerful message that the oppressor and the oppressed can come together and find a common ground that is based on the values of freedom and justice, and that this is the only way to ensure a free and dignified life in Palestine.

In “Bride of Galilee,” director Basil Tanous communicates the importance of standing in solidarity with the oppressed. In this film, a remarkable meeting takes place between Fatima Hawwari, who was paralyzed by Israeli airstrikes on her village of Tarshiha during the 1948 War, and Abe Nathan, the Jewish pilot who bombed her house. Tanous’ film is a call to action — an invitation to abandon victimhood, reclaim our dignity, and reaffirm our right to life in Palestine.

But directing alone is not enough to create films about the Nakba in 2023 that remain true to the history and present of the Palestinian condition. The Palestinian film industry must also exercise sensitivity and care in the writing process, including an in-depth study of history, knowledge of Palestinian actors’ names and abilities, familiarity with sources that documented and preserved oral histories, and the ability to sift information and set it straight. Dialogue must be faithful to the collective narrative and adhere to a credible and equal discourse, and there must be a solid commitment to high-quality and careful selection of every detail. 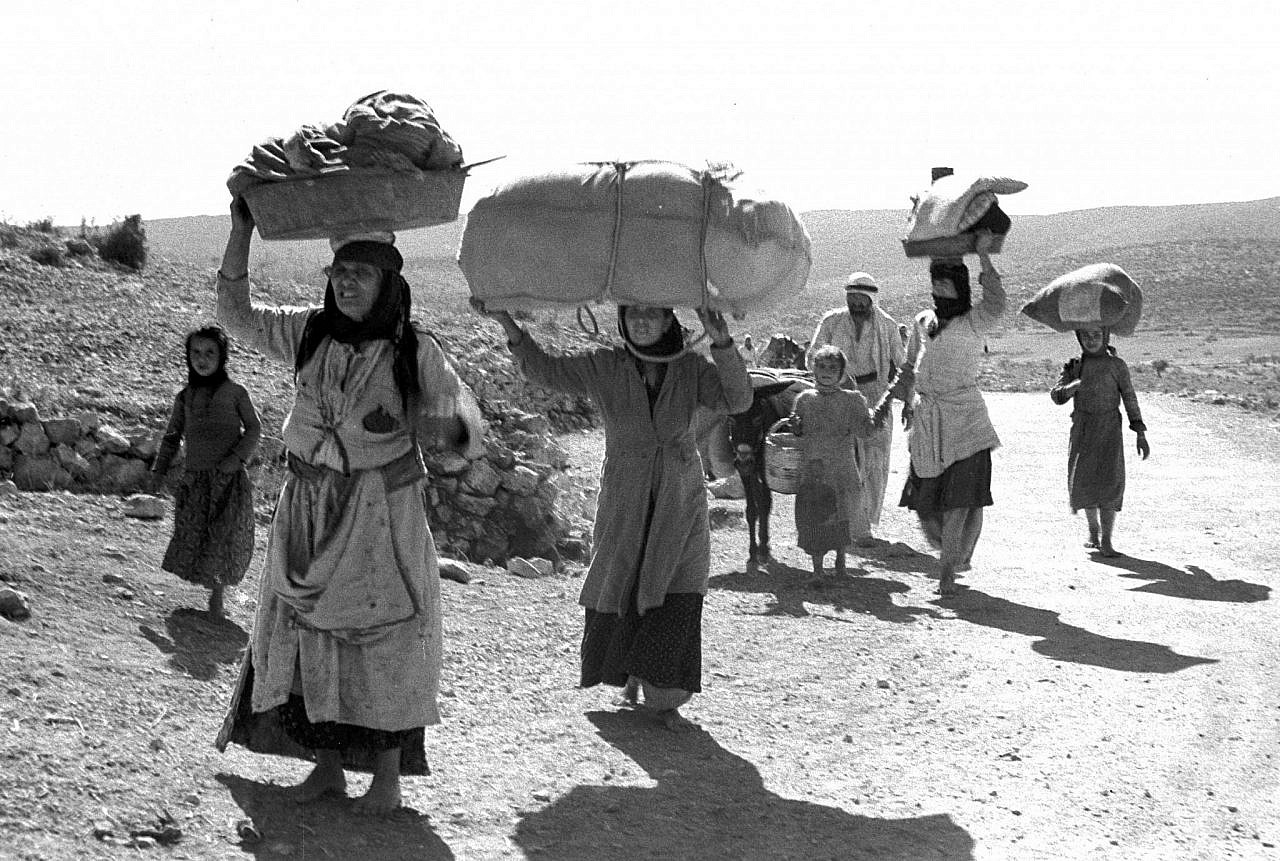 Palestinians flee their village in the Galilee after the entry of Zionist forces, 1948. (GPO)

As with music and art, Palestinian films should keep up with the evolution of cinema: they must be up-to-date with contemporary film-making methods in order to attract international viewers and compete with films that either portray Palestinians as the enemy or ignore their story altogether. With outdated visuals and directing, the development of Palestinian films will be limited and will not have the potential to be successful on a global scale. And the filmmakers of today must keep the political cause in mind, as films have a prominent role in the national project — platforms such as Netflix offer new ways to mobilize solidarity and tell the Palestinian story.

Furthermore, directors need to be aware of the ongoing attempt to undermine and annihilate the Palestinian narrative. Establishing a solid foundation is crucial, as it is impossible to shape the public’s opinion in both Israel and globally about the Nakba and its consequences through superficial films — ones that merely repeat already-existing works, or ones that simply mention the Nakba in passing.

A new generation of Palestinian filmmakers, including Maha Haj, Mahdi Flefel, Annemarie Jacir, Basel Khalil, Najwa Najjar, and Shadi Habib Allah, has been taking bold steps to raise social and political issues within Palestinian society. These issues have been the driving force behind many Palestinian films in the last decade, with a variety of documentary and narrative feature films appearing at international festivals and winning awards. Despite the struggles facing Palestinian society, this new generation must remain focused on the greater political cause and remember that the Nakba is still a present, everyday challenge.

Palestinian cinema funds may be lacking, yet there is an unwavering spirit of perseverance and determination to keep the issue alive. Despite the obstacles, filmmakers are determined to bring Palestinian stories to the world and to create better opportunities for their culture. The rise of streaming services such as Netflix, with the “Palestinian Stories” collection it launched in 2021, provides a platform to tell our story from our own perspective and mobilize more solidarity.

It is clear that even with the presence of profit motives, the average Palestinian filmmaker is adamant about using cinema as a tool to fight for their national project. With the strength and resilience of the Palestinian people, and the increasing support from digital platforms, the Palestinian story will continue to be told for many generations to come.