A known right-wing activist tried to sue left-wing academic Anat Matar for calling him an ‘arch-fascist’ on Facebook. It blew up in his face. 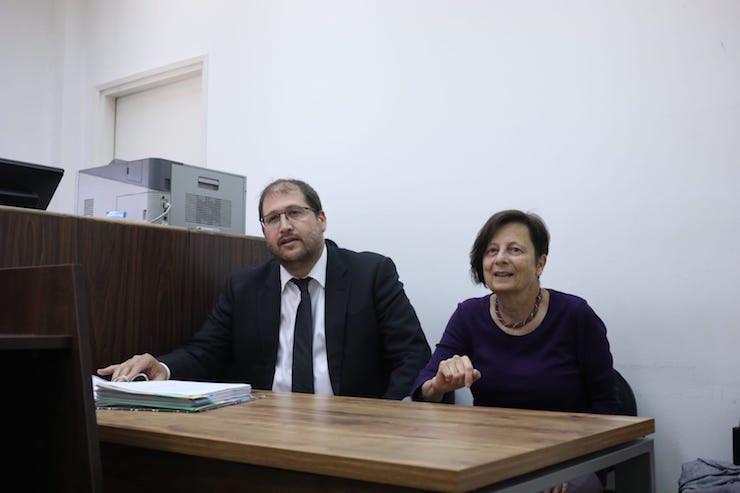 A prominent right-wing activist published a statement last week acknowledging that he shouldn’t file lawsuits to resolve political arguments, as part of an agreement to settle a lawsuit he filed. Left-wing activist Anat Matar, whom he sued for calling him an “arch-fascist” in a 2017 Facebook post, agreed to publish a statement expanding on all the reasons why she labeled him a fascist in the first place.

(Full Disclosure: Anat Matar is the mother of Haggai Matar, the executive-director of “972 — Advancement of Citizen Journalism,” the NGO that serves as the publisher of both +972 Magazine and Local Call.)

Shai Glick is the founder of an organization called BTSALMO (a riff on Israeli human rights organization B’tselem). Through BTSALMO, he has demanded that Israeli government ministers and heads of local authorities pressure venues to pull funding from or not host events by left-wing groups critical of the occupation.

The expanded text Matar agreed to publish as part of the settlement, explaining her decision to describe Glick as an “arch-fascist,” was taken from her reply to his lawsuit filed with the court. In it, Matar addresses the central role of “informants” in fascist regimes or regimes with fascist qualities, while explaining why a person who acts to silence others can be termed a fascist.

Following the hearing last Tuesday, Glick posted a status on Facebook: “On July 16, 2018 I filed a lawsuit against Dr. Anat Mater for calling me an arch-fascist. After a hearing and statements read in court, I understood that I should not file such lawsuits and that such arguments should be arbitrated in the public sphere.”

“This man is a fascist, it’s just that simple,” said Michael Sfard, Matar’s attorney. “There are those who will say he is not — that is a legitimate opinion. He is an arch-fascist. This is the opinion of a person who specializes in the field. Mr. Shai Shamai Glick is a fascist on several levels: he is a fascist in the public political sense, and he is a fascist in his discourse.”

In her original post, published September 2017, Matar addressed attempts to get the state to pull its funding from the Arab-Hebrew Theater in Jaffa, managed by Yigal Azarti. At the time, Glick, alongside efforts by Culture Minister Miri Regev, was leading a campaign to pull the theater’s budget because it hosted an event in support of of Dareen Tatour, a Palestinian citizen of Israel jailed for her poetry.

I don’t know how many years I have known Yigal Azarti. Many years. You cannot think of him without the words “dedicated, brave and humble” immediately coming to mind. If the contemptible [Finance Minister Moshe] Kahlon and [Culture Minister Miri] Regev make good on their malicious efforts (and those of arch-fascist Shai Glick) and cut the budget of the theater Yigal has run for many years – an amazing and praiseworthy project – we won’t leave Yigal to fend for himself. I have no idea how to raise funds to reach the sums they plan to cut, and we don’t yet know if it will happen, but we must try.

In the expanded text she published on her Facebook page last Tuesday, Matar laid out the reasons she chose to label Glick a “fascist”:

I want to expand on what I meant when I called Glick a fascist: in the current context, it is important to invoke the central role that the act of informing plays in a fascist regime, or a regime with fascist characteristics. In the famous educational experiment “The Third Wave,” the phenomenon of informing was listed as one of the dominant signs that students had accepted fascism. Brecht’s play “The Informant” is possibly the most clear and concise expression of the horror of informing: the ability to recruit an ordinary citizen to serve as an arm of the regime and inform on any deviation from the nationalist-consensus edict. This insight into fascist ideology is based on the definition of a fascist as someone who works to silence others in the name of the supposed good of the nation, to inform on subversive voices from the left who are marked as enemies, traitors, etc. Therefore, and in accordance with Shai Glick’s actions and treatment of institutions, organizations, and people that express opinions that deviate from the regime’s edicts, labeling him a fascist is, in my professional understanding, accurate.

Shortly after Matar published the Facebook status in 2017, Glick sent her a letter demanding she pay him NIS 500,000 ($140,000) in damages. Last year he filed the lawsuit in a small claims court; after one hearing, Matar requested the case be transferred to the magistrate’s court, which would allow the sides to present evidence.

During the hearing, Glick, who represented himself, highlighted that he is interested in an apology rather than monetary compensation. “I said I do not ask for money, just the publication of an apology,” Glick said at the start of the discussion. “This is an act by an expert that causes damage to a private individual,” he said, referring to the fact that Matar is as a lecturer of philosophy at Tel Aviv University. Sfard called this a classic effort to silence free speech that must be rejected out of hand.

“As opposed to other legal systems, the Israeli judicial system has not created the tools to handle such a failure, of a man who repeatedly files lawsuits simply to harass those he perceives as his political rivals,” said Sfard. Until Glick is forced to pay the legal fees of those he sues, Sfard continued, he will continue to take leftists to court for their remarks, despite the fact that he himself has made unseemly comments about leftists. “He calls them collaborators, traitors, and enemies of the people, he calls Breaking the Silence thousands of names. He sits in a glass house and throws stones.”

“This is not the first time I have dealt with this plaintiff,” Sfard said, referring to Glick’s lawsuit against anti-occupation organization Breaking the Silence, which he also represents. Breaking the Silence called Glick a liar in a response to comments he made about the organization in a profile of him published by Israeli site Mako. “We have made similar offers every single time this has happened, even offering to withdraw the lawsuit without consequences.”

Sfard noted that he regrets agreeing to dismiss the case in the last lawsuit against Breaking the Silence as well as the court order that Glick pay minor legal fees of several hundred shekels. Glick has another lawsuit open against a left-wing activist.

Following the hearing, Glick asked Attorney Sfard to sign a copy of his book, “The Wall and the Gate.” In the dedication, Sfard wrote “I hope you learned something.”

*Disclosure: Shamai Glick recently filed a complaint against Local Call with the Israel Press Council Committee on Professional Ethics of Journalism about an opinion piece in which he is mentioned. The complaint has yet to be arbitrated.