The Arab revolutions have been a key reason for the reconciliation between Hamas and Fatah. This was apparent in the change of tone by both sides following the uprising in Egypt. President Abbas and Prime Minster Fayyad surprised everyone with the their proposals for unity. Abbas offered to visit Gaza to reconcile with Hamas and Fayyad went even further suggesting a joint government without Hamas having to relinquish its control over Gaza. These two offers were considered red lines for Fatah just few months ago.

Hamas has also been following the changes in the Middle East with growing interest and anxiety.  The centers of power are changing and some of their allies in the region are facing internal challenges and uprisings, which they might not survive.

Hamas’ ambition goes beyond ruling an internationally isolated Gaza. They understand their limited ability to govern or to generate economic growth. Hamas learned from watching the Arab revolutions that there is the potential for unrest in Gaza.  The consequence of the siege, in addition to the high level of unemployment, poverty and the continued regular bombing of Gaza by the Israeli military is a recipe for failure. Hamas found itself on the same course tha made Fatah unpopular in 2005. At one point Gazans will ask Hamas’ leaders what are they doing to make a difference. The people will not be satisfied with just blaming Israel. They want to see a difference in their lives and they expect their leaders to have a strategy that would lead them to freedom, dignity and security.

The new Palestinian strategy is the key

Accused  of being a weak president when first taking office, Abbas has recently proved to be a visionary leader.  His decision to outline a Palestinian vision for securing recognition of a Palestinian state on 1967 borders by September is a change from the former approach of waiting for what Israel “benevolently” has to offer. His decision to refuse negotiating with Israel until a settlement freeze is applied won him respect from the Palestinian people.

After two years of patiently waiting on President Obama, Abbas seemed to have lost hope in the great power intervention. The Palestinian leadership decided that they must choose a different avenue if they want to shake the political stalemate. This new path includes the internationalization of the Palestinian case and putting Israel under pressure by countries sympathetic to the Palestinian cause. 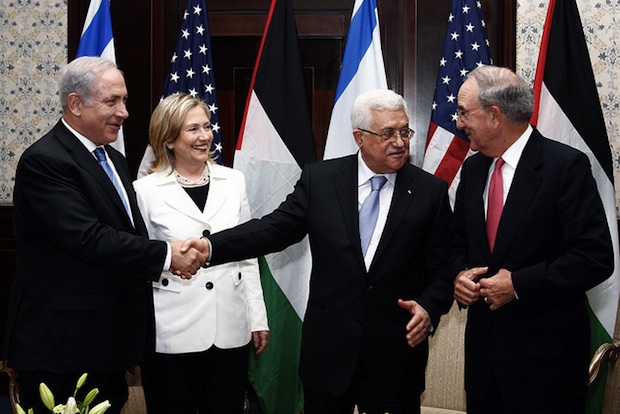 Hamas has nothing to disagree with Fatah on this strategy. Its decision to reconcile with Fatah indicates their support of the PLO’s new approach. Hamas has no better ideas to offer the Palestinian people on how to end the occupation. It had to make a choice between the status quo or actively working with Fatah and the other Palestinian factions on creating a Palestinian state.

A unity government will legitimize Hamas especially in the Arab world. In addition this agreement will also promote stability in Gaza and strengthen Hamas against the new established extremist groups that are challenging its governance.

The Israeli government ignored that Hamas had been giving clear signs of its willingness to accept to the two-state solution. Both Khaled Mashal and Ismail Hanniyeh have spoken publicly about accepting a Palestinian state within the 1967 border. Many believe that Hamas was waiting for President Abbas to negotiate an agreement before jumping on board.

Israel itself had been negotiating with Hamas indirectly through a German mediator in an effort for a prisoner exchange.  This raises an important question: Why is it okay to negotiate with Hamas on prisoners but not on other issues?

The Palestinian people celebrate the reconciliation

It might be too early to celebrate the new agreement between Hamas and Fatah considering that some important details are not yet finalized. However signs of celebration are apparent in the West Bank, Gaza and Arab states.  Palestinians are hopeful this agreement will survive despite the fact that Hamas and Fatah have history of reconciliation celebrations that proved to be premature. Both parties understand that the failure of this agreement will cost them a heavy price and potentially an Egyptian-like revolution.

If this agreement does survive and holds water, the Palestinians are changing the rules of the game. They are two steps ahead of Netanyahu and Obama in their strategic planning. The Palestinian strategy has been for too long emotional, filled with reactionary responses to Israeli actions, and consequently unproductive. It is a breath of fresh air for Palestinians to see their leaders making a giant shift in their behavior. The reconciliation between Hamas and Fatah and the clear strategy for achieving independence is inspiring Palestinians to believe once again in their leaders.