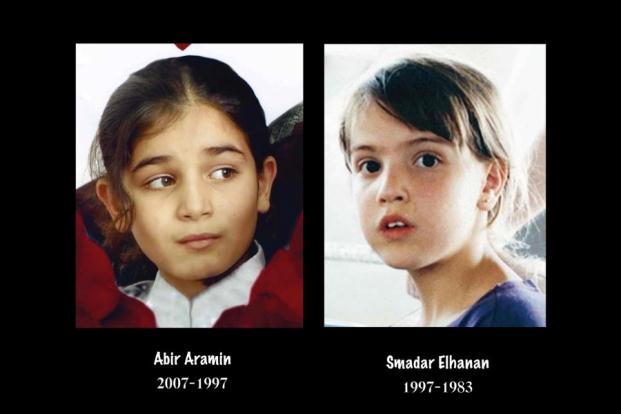 I am voting, but I will not be endorsing any party in the upcoming elections (I wrote about for whom and how I think Israelis should vote here). Instead, I am posting a message that Rami Elhanan posted on his Facebook wall yesterday, beneath the pictures of his 14-year-old daughter who was killed in a suicide bombing in Jerusalem, and of Palestinian Abir Aramin, 10, who was shot to death by soldiers near her school.

Today, 6 years ago, 10 years old Abir Aramin was murdered outside her school in Anata. Border police “fighter” shot a rubber bullet in her back, no reason…

6 long and agonizing years have passed since we and the Combatants for Peace were standing by her bedside in Hadassah hospital, 6 years that the “most moral army in the world” has failed to find and bring to justice even one of those responsible…

6 years in which the occupation authorities continued killing of innocent people without charge – no law and no judge … Time after time after time, a circle of blood with no end and no purpose … And yesterday another Palestinian kid, 17 … the fourth this week! Thousands of innocent victims since Abir’s death…

For 6 years I have been thinking about Abir. All the time.

For 6 years I remember and remind about this innocent pure girl that never ever did any wrong to anyone.

I remember her, and I remember whoever killed her – a victim like her – both victims of the occupation.

For 15 years I have been thinking about Smadar. All the time.

For 15 years I remember and remind about this innocent pure girl that never ever did any wrong to anyone I remember her, and I remember whoever killed her – a victim like her – both victims of the occupation.

Next Tuesday we have elections!