Palestinian parliamentarian Khalida Jarrar served 14 months for incitement and membership in the Popular Front for the Liberation of Palestine. 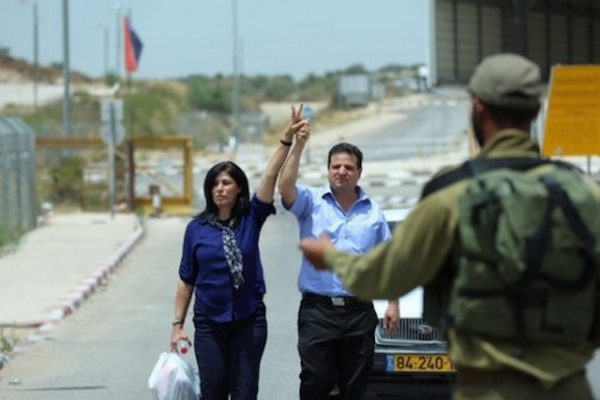 Feminist Palestinian lawmaker Khalida Jarrar, who served 14 months in an Israeli prison, was released Friday morning to a crowd of chanting supporters.

Jarrar, a member of the Popular Front for the Liberation of Palestine (PFLP) was sentenced on December 6, 2015 at Ofer Military Prison. She is a well-known critic of the Palestinian Authority and specifically its security coordination with Israel. After eight months of imprisonment, some of which was spent in administrative detention, Jarrar signed a plea bargain, in which she admitted to charges of incitement, as well as belonging to the PFLP — a party she represents in the Palestinian Legislative Council (PLC) — which is defined by Israel as a proscribed organization.

Joint List Chairman Ayman Odeh came to greet Jarrar as she left prison, saying: “Khalida Jarrar was arrested and jailed, at first with no trial, in an attempt to silence her struggle against the occupation. But in the end, they only emboldened her power and her struggle.”

Jarrar was first elected to the PLC in January 2006, following years of political activism in support of women and prisoners. She is married, has two daughters, and is the first woman to be elected to the PLC on behalf of the Popular Front for the Liberation of Palestine. Between 1993 and 2005, she headed the Palestinian NGO Addameer, a Palestinian NGO that supports Palestinian political prisoners held in Israeli and Palestinian prisons, and remained a member of the PFLP’s managing committee even after her election.

There are currently six Palestinian legislator in Israeli custody: Ahmad Sa’adat, the secretary-general of the Popular Front for the Liberation of Palestine (PFLP) who is serving a 30-year sentence; Marwan Barghouti, who is serving four consecutive life sentences; Hatem Hafisha and Hassan Yousef who are being held in administrative detention, and Jerusalem resident Muhammad Mahmoud Abu Tir.