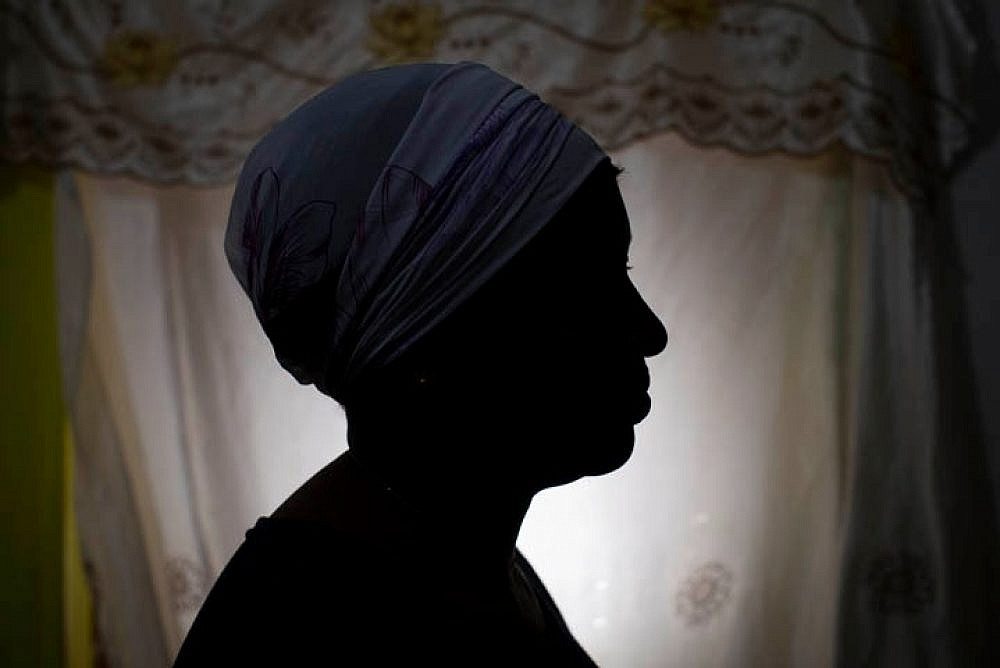 Binto, a survivor of FGM who was granted asylum in Israel, in her home. “I want them to stop doing this to girls everywhere. All women should be free and have control over their own bodies.” (Oren Ziv)

Israel’s High Court ruled on Sunday that the state must give asylum status to parents who emigrated from the Ivory Coast, and their two daughters who were born in Israel. By basing its reasoning on gender-based violence, rather than civil war or humanitarian crisis, the ruling is groundbreaking. Throughout the trial, the parents raised their concern that members of the extended family in the Ivory Coast would forcibly subject their daughters to genital mutilation (FGM) if Israel were to deport them.

This ruling is unprecedented: it’s the first time the High Court in Israel has exercised its judicial power to instruct the state to recognize asylum seekers as refugees. To date, the Interior Ministry’s policy has been to collectively reject asylum requests, often without a thorough examination of the cases. Of the tens of thousands of African asylum seekers in Israel, the state has only recognized 13 Eritrean refugees and one refugee from Sudan. Hundreds more have received humanitarian status, which can be renewed but in effect is only valid for a year. The courts often criticize this policy, or pressure the authorities to grant humanitarian status, but other than this case and another in the court of appeals, they have never used their judicial power to grant asylum status.

“The state has agreed to recognize [asylum] only in exceptional cases. The Eritreans who received status in the past were those who dared to prove that the danger to their life was associated with their sexual orientation, like transgenders and gay people,” explained Sigal Rozen, the public policy director at the Hotline for Refugees and Migrants. “In this case, the threat of violence is gender-based, by family members. But the Interior Ministry ignores more common grounds, such as dissenters or victims of genocide, because these will force it to recognize a larger number of refugees,” she added.

Binto, the mother who led the family’s fight for asylum recognition, herself experienced FGM. She asked that her real identity not be revealed. “When they did this to me, I was very young, 3 or 4 years old,” she said. “I don’t remember it. At first I thought this was normal, that all women need to undergo it before marriage. According to tradition, it proves that I am now a real woman — and they are happy to carry it out. It is a mystical phenomenon that they don’t explain to us. It is usually performed on five or six girls together, followed by a celebration.”

“When I grew up and went to school and met Christian girls, I understood,” Binto recalls. “Here, their families are not doing this to them, and they, too, say this is not okay. Slowly, I began to understand that FGM is bad. I would keep it from my friends, I didn’t want them to know this was done to me. I would hide all the time, at school. I was ashamed. I felt great shame,” she continued.

Binto shared with great pain the extent to which this violation of her body has caused her harm. “You don’t feel anything when you are with a man,” she said. She said that FGM has made it difficult to get pregnant and give birth. The procedure leads to diseases and infections, she said, because the same knife is used on more than one girl. Sometimes, girls die in the process, she added. 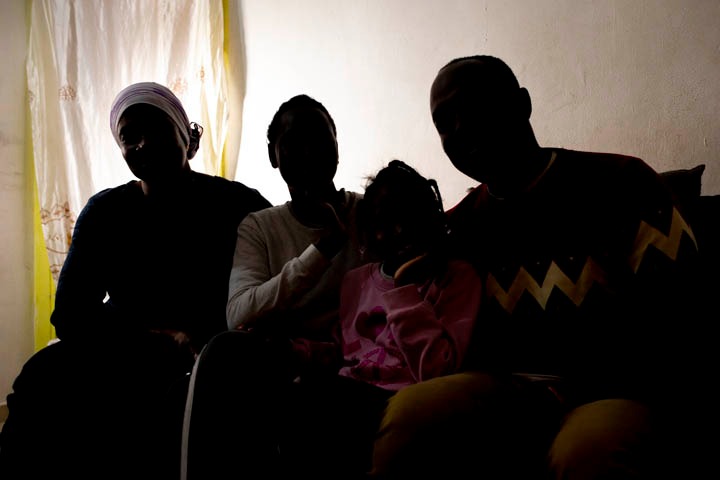 Binto, a survivor of FGM, in her home with her husband and daughters. The family was granted asylum on Sunday in an unprecedented High Court ruling. (Oren Ziv)

In addition to the damages Binto describes, the ruling also deals extensively with the health complications caused by FGM. It says that the procedure increases the chances of contracting HIV and hepatitis, and increases the risks of miscarrying and bleeding excessively after giving birth. FGM also damages the digestive system and leads to mental health problems like anxiety, post-trauma and depression.

When did you realize that you are not willing to go back?

“I understood that when I am there, I cannot say anything, that they have a lot of power. It’s ‘family honor,’ they are protecting the community’s reputation. Now that I am here, I am against it, I am against them, and I don’t want my daughters to go through it, I don’t want them to do this to my daughters.”

“My family forced me and my older sister to be violated this way. My mother did this to us against our will. I tried to speak to her but they [the family] are very powerful and I can’t talk to them. Maybe the government there will do something to stop it. They are trying, but it’s still being carried out. It happens over and over.”

Despite the shame, Binto feels the need to talk about the harms of FGM, so that other women don’t suffer or lose their lives. “I want them to stop doing this to girls everywhere. All women should be free and have control over their own bodies.”

The unprecedented recognition of FGM as a grave danger that warrants refugee status reflects the work being done by international NGOs to stop the procedure. “UNHCR issued a decision on this in the late 90s,” said Dr. Avinoam Cohen, a lecturer on international law who instructs the Concord legal clinic at the College of Management Academic Studies.

As the ruling stipulates, in 2009, the UN Refugee Agency published a guidance note on refugee claims relating to FGM, recognizing this gender-based violence as a form of persecution. While the procedure is “mostly perpetrated by private individuals,” the note explains, “it “does not preclude the establishment of a well-founded fear of persecution if the authorities concerned are unable or unwilling to protect girls and women from the practice.”

Attorney Michal Pomerantz, who represented the family alongside attorney Asaf Weizman, admits that “the expectations were not high given how horrible the record in Israel is for providing refugee protection.” According to the Interior Ministry’s assessment, she said, there is no problem with deporting the family back to the Ivory Coast; they could relocate to live away from their extended family members who would subject the daughters to FGM.

“The family said their tribe is scattered across the country, so either someone will alert the extended family of their return, or they would have to live in hiding so that nobody finds them — this is not a life. To be clear, this is not a matter of personal choice, it’s tribal.” 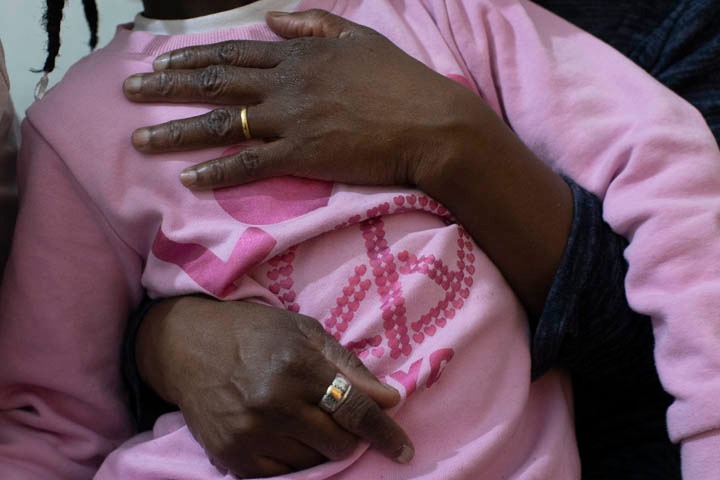 Binto, a survivor of FGM, in her home with her daughter. The family was granted asylum on Sunday in an unprecedented High Court ruling. (Oren Ziv)

Dr. Cohen, who served as a friend of the court together with the Concord Clinic, explained that the danger is based on the Ivory Coast’s failure to prevent this phenomenon. “We showed how, when the country is required to report on FGM, it documents six or less cases of prosecution. The law does not correspond with the actions on the ground. The State of Israel did not convince us that it had done enough to prevent [the girls] from being subjected to this danger.”

According to Pomerantz, what is unprecedented about the ruling is “that the High Court is intervening in the Interior Ministry’s decisions on asylum requests. Our system is broken.” She continued: “Finally, [the court] is showing, step by step, how such requests should be processed. Other countries recognize FGM as grounds for asylum on a regular basis. In Israel, we get very excited by this decision because being recognized as a refugee is a rare decision.”

Dr. Cohen is cautiously optimistic about the ruling’s impact, especially in the courts. “Unfortunately, I don’t believe this decision will have a significant effect. Will the Interior Ministry change the way it makes decisions? I doubt it,” he said. The Interior Ministry will weather this defeat and won’t change its position, Dr. Cohen concludes, “but maybe they will be more careful in their assessments before deciding that someone is safe in their country.” What might change, though, is that the ruling could give lower courts support to approve asylum status, he added.

Binto said she was very moved by the decision. “I am very happy they recognized all members of our family,” she said. “I want to thank them for recognizing the need to protect my daughters.”

Naomi Niddam is a journalist.

Before you go…
A lot of work goes into creating articles like the one you just read. +972 Magazine is nonprofit journalism, owned by many of our writers, editors, and journalists. In order to safeguard that independent voice, we are proud to count you, our readers, as our most important supporters. With your support, we can keep +972 Magazine a strong, independent, and sustainable force helping push the global discourse on Israel/Palestine.
DONATE
More About Asylum Seekers