New report by Israeli and international rights groups demand more protection for the right to protest. But even as the report shines a light on the West Bank, how can you protect a right you don’t have? 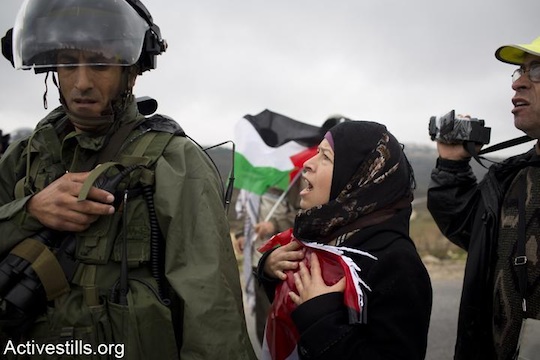 Nariman Tamimi, wife of Bassem Tamimi and sister of Rushdi Tamimi, who was killed by the Israeli army a week before this picture was taken, shouts at a border policeman during the weekly protest against the occupation in the West Bank village of Nabi Saleh, November 23, 2012. (Photo: Oren Ziv/Activestills.org)

If freedom of expression is the grievance system of democracies, the right to protest and peaceful assembly is democracy’s megaphone. It is the tool of the poor and the marginalized – those who do not have ready access to the levers of power and influence, those who need to take to the streets to make their voices heard.

(‘Take back the streets: Repression and criminalization of protests around the world’, by the International Network of Civil Liberties Organizations.)

With an introduction like that, it was slightly strange to find a case study on Bassem Tamimi and Nabi Saleh in a report highlighting the repression and criminalization of protests around the world. In the West Bank, and especially in Nabi Saleh, there is no democracy and there is certainly no right to protest or peaceful assembly.

Israeli military law, which is the law of the land in the West Bank, “prohibits virtually all protest activity, including vigils, processions, publications, and even personal items expressing a political viewpoint,” notes the report by International Network of Civil Liberties Organizations, a group made up of 10 organizations including the Association for Civil Rights in Israel and the American Civil Liberties Union.

Tamimi has paid a particularly heavy price for his and his village’s decision to begin popular protests: he has spent over a year in prison for his role in organizing protests against illegal settlement expansion and the theft of Nabi Saleh’s land and fresh-water spring. As a result, Amnesty International named him a prisoner of conscience. 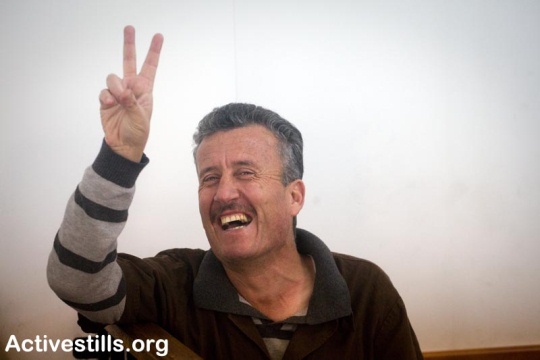 Bassem Tamimi, coordinator of the Nabi Salih popular committee, is seen inside a court room in the Israeli military offer camp, just before his hearing on December 4, 2011.
Photo by: Oren Ziv/ Activestills.org

Hundreds of others have been arrested, dozens injured and two killed in the village of 500.

But perhaps the part of the INCLO report most relevant to Nabi Saleh and Palestinian popular protest is not actually in the section dealing with Tamimi and Nabi Saleh.

One of the most common criticisms Israelis voice against Palestinian popular protests are articulated as challenges to their non-violent character. Some point to stone throwing – fairly common in most protests in the West Bank – as an act of violence, and they are right, irrespective of questions of proportionality, self defense and harm caused.

In other words, even if a number of individuals in an otherwise peaceful protest employ acts of violence, that, in and of itself, does not make the protest itself violent. And the protections granted to peaceful protest are not invalidated by the acts of a few.

Declaring a protest violent, even when the majority of protesters are not engaged in violence, is “used to justify a wide range of repressive state measures, including lethal use of force,” the report explains.

With that in mind, the discussion should be framed around the “right to protest” and not of “the right to peaceful assembly,” the 10 civil rights organizations write.

History tells us that many of the fundamental rights we enjoy today were obtained after generations before us engaged in sustained protests in the streets: the prohibition against child labor, steps toward racial equality, women’s suffrage – to name just a few – were each accomplished with the help of public expression of these demands. (INCLO report)

All of those struggles against oppression and discrimination, however, directly challenged the self-interested economic and political powers that implemented the oppressive and discriminatory systems in the first place.

Palestinian protest is against the occupation and its symptoms, be they walls, settlers, restrictions on movement or political imprisonment. In their case, the center of power most vested and self-interested in maintaining the occupation also happens to be the institution responsible for granting and taking away the Palestinians’ right to protest against it.

So will the army, which the State of Israel 46 years ago crowned the sovereign of the West Bank, decide to allow Palestinians to protest against it, violently or non-violently, as enshrined in international law or as forbidden by Israeli military law? No.

As senior Israeli Defense Ministry official Amos Gilad said a few years back about non-violent protest in the West Bank: “We don’t do Gandhi very well.”