By leaving the Palestinian conflict in the background, filmmaker Lapid manages to skip over the common ‘shooting-and-crying’ formula, in which Israeli protagonists are portrayed more as victims than perpetrators of the conflict.

The timing of the release of Israeli filmmaker Nadav Lapid’s debut, “Policeman,” was very unique in Israel: October 2011, right after that summer’s so-called Tent Protests, which saw hundreds of thousands Israelis take to the streets over social and economic issues. “Policeman,” which was shot and completed before the surprising demonstrations erupted, tells the story of a confrontation between a group of young revolutionaries plotting to kidnap a local tycoon, and a police officer in an anti-terror unit that will be called upon stop them.

When Lapid wrote a script about violent internal struggle over economic issues in a country whose politics had been dominated by the conflict for a century, it must have seemed like science fiction (in interviews, Lapid referred to it as “a fantasy”). By the time the film was released Lapid’s fantasy seemed more like a prophesy, winning the movie a nice turnout and more attention than one could expect from a movie that is very challenging, both in style and in content. And yet don’t be fooled: at the heart of “Policeman” lies a delicate deconstruction of modern Israeli identity, and like everything Israeli, it has a lot to do with the Palestinians. 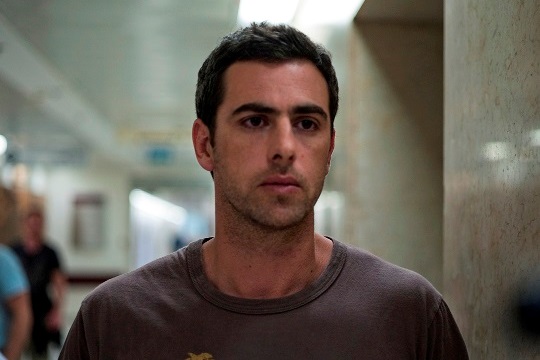 I know Lapid pretty well so I got to see “Policeman” in an early screening, and I haven’t seen it since. But the movie, which was screened in New York  last week, stuck with me in more than one way. Right now there aren’t any future screenings listed on the film’s site, but if there are in the future, I recommend checking it out.

The plot is basically broken into two: In the first 40 minutes we get to know Yaron (played by the excellent Yiftach Klein) – a member of an elite police unit, popular with his friends and with women, an all-Israeli alpha male. Two important events take place in his life – Yaron and his unit members are facing an investigation regarding the killing of a Palestinian detainee, and his wife is due to give birth soon to their first daughter.

About halfway the movie leaves Yaron and turns to the revolutionaries. Lapid places a special emphasis on their internal dynamics in the group, which is centered on a love triangle. The third and final part of the film brings about the inevitable confrontations between the two groups.

Other reviews touched on the slow-pace of the film and Lapid’s unique style as a director (“Policeman” won praises from the New York Times). There is something very European about the film, which also goes against the current trends in local cinema. I’ll make a few remarks about the politics of “Policeman,” which I thought to be very interesting, and unlike any other Israeli film I’ve seen.

Lapid makes a rare choice in ‘Policeman’  – he leaves the Palestinian conflict in the background (mainly through Yaron’s attempt to end the probe against his unit), and instead focuses on the internal Israeli dynamic: the young rebels versus the heart of the mainstream. This already means that the film will not follow the shooting-and-crying formula, which is common in works of popular culture that have attempted to deal with the conflict from an Israeli perspective. In most of them, the Israeli protagonist was portrayed more as a victim of the conflict rather than a perpetrator (I touched this when in my reviews of “Zero Dark Thirty,” and the same formula runs through Ari Shavit’s My Promised Land as well). This ritual of self pity and absolution doesn’t take place in “Policeman” – not for the policeman and not for the viewers.

Instead, we get to see one of the most complete attempts to show the all-Israeli machismo at least since the 1970s. Israeli highbrow cinema tends to show different characters, none of whom smell the Naplam in the morning. This also relates to issues of responsibility and guilt: many critics see the new Israeli anti-hero as another attempt by the cultural elites to distance themselves from any responsibility for the wars and occupation. These are not anti-war films, but films which rationalize war for certain social groups.

In Israeli war films of the last decades, the heroes are usually powerless guys who are dragged into the war; a fact that reflects something deep in the psychology of an extremely powerful and potent society. But the policeman in Lapid’s film is more like the Israel who is idolized in the local news. Yaron is chauvinistic, militaristic, childish and rude, but also charismatic and even charming. I found him to be rather lovable – yet at the same time there is something disturbing about him, and the automatic nature in which he carries himself. Yiftach is like a machine, which only comes to a brief halt at the very last moment of the film.

This study of Israeli males and manhood continues with the portrait of the revolutionary group. Though I found this part of the film to be less interesting or compelling, there is a touching plot line about a one rebel who is raised by a single father, a political activist who gave it all up. The mother is absent – I don’t remember why – and there is some gentle hopelessness in both father and son. If Yaron runs on autopilot, these two simply lost their way. In both cases, the results are just as disastrous in both cases. 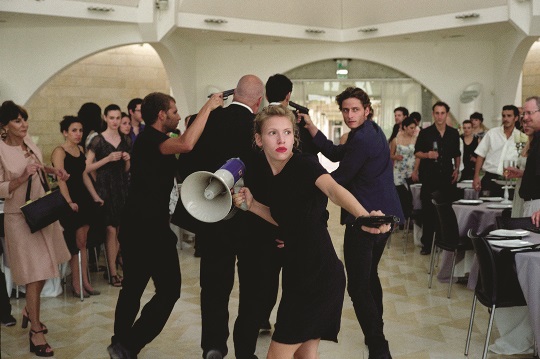 I think that Lapid is interested in the Israeli – in the psyche of the national character. He clearly loves his characters, but as the film progresses, you get the feeling that something went terribly wrong with them. That’s true to the anarchists as well, whose leader turns out to be a man of words, not action.

One of the film’s greatest achievements is its ability to describe the Israeli crisis without the use of Arab characters (the more common method for self criticism is by idolizing the victim). Thus, Lapid also avoids all the problems in such a representation faced by other Israeli cinematographers, or Western ones in general. Instead, he turns his gaze inward, in an internal investigation that is both caring and honest.

“Policeman” takes time and patience from its viewers, but once you devote yourself to it, it gives plenty in return.