Maintaining a boundary between support, solidarity and an acknowledgment of Israel’s wrongdoing toward Palestinians without appropriating the memory is an ongoing and constant effort. In Mansura, I found something different. 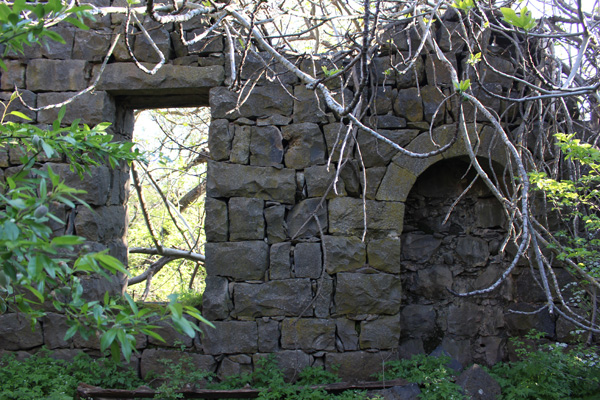 The remnants of the mosque in the destroyed Golan Heights village of Sur’aman. (Natasha Roth)

For years, I have been acting in the realm of the political memory, the construction of memory, deconstructing and erecting myths. I launched an organization dealing with memory. But somehow, I always remained external to the memories I touched upon: it was the Palestinian memory, which isn’t mine organically. I organized visits of Israelis to the Palestinian villages Israel destroyed during the Nakba and I initiated the practice of putting new signs in these villages, a practice deeply rooted in the colonial tradition. Those who were uprooted from them, adopted the new signs enthusiastically because they challenge the colonizer that originally came up with the practice. Since then they have been marking the places that Israel destroyed during the Nakba.

My position as someone active in the realm of a memory-that-is-not-mine created a constant tension between wanting to push forward new and important ideas and actions to challenge the foundations of the Israeli regime on the one hand, and caution necessary to not to appropriate the memory and take over its preservation on the other. I remember once being in the destroyed village of Miska on Israeli Independence Day, Jews and Arabs, commemorating the Nakba of the village. Something went wrong and immediately one of the Israelis began advising the Palestinians about how to act next. I felt very uncomfortable and had to tell him that. On the other hand, I could identify with him. We were both brought up as the masters of the land under whose authority the indigenous Palestinians should remain.

The Nakba is the history of anyone living on this land and/or anyone who cherishes it. It was constructed politically and culturally as a “what they see as a disaster”, as the collective memory of Palestinians only.[1] That’s why there’s a constant gap between the memory of the Nakba as a disaster for its Palestinian victims and others, such as Israelis, who at most can fight against the attempt to erase the Nakba of this place’s history. Pierre Nora, who made a distinction between history and memory, claims that the former “is an intellectual, secularizing act, inviting analysis and a critical discourse. The memory situates commemoration within the realm of the sacred; history shakes it out of there… Collective memory is unifying… history… belongs to everyone and to no one, a quality that validates its universalist purpose. Memory is rooted in the concrete, in space, gesture, a picture and an object.”[2]

Maintaining a boundary between lending support, solidarity and an acknowledgment of the wrongdoing by the state toward Palestinians on the one hand, without appropriating the memory on the other, is an ongoing and constant effort. On the Palestinian issue I am therefore in limbo, a kind of intermediator. I learn from Palestinians, listen to them, and then intend to translate their memory into history so that it is understood and is made available for “analysis and a critical discourse”[3] among the Jewish population of the land.

It is a challenging, often uncomfortable position, because in it I can never feel at home. It demands that I be cautious and sensitive because it is not my home but the home I occupied, the home we occupied. The Nakba of Miska did not become my memory, it is not sacred for me in the same way it is for those who were uprooted from there, even after visiting the place many times together with them.

In Mansura, in the occupied Golan Heights, I found myself in a different position. Mansura is one of two hundred localities that existed in the Golan until its occupation by Israel in 1967. Ethnically Circassian, its population at the time numbered 1,100 people. I’ve been constructing this story for five years together with my partner, Eléonore. The first time she arrived to the village where her father was born I was the one to locate it. When we pulled over she wandered on her own around the village for a long time in silence — as though she was trying to hear her father, as a child, playing volleyball, at which he excelled. It took her a long while to accept my being there, with her, and to begin telling me what she knew about the village.

We have been back there time and again since and constructed our own story of the place. We came with family and friends and created in Mansura physical and symbolic relics. We also met Farouk, Eléonore’s father who was born there. He shared — mostly with me — his knowledge and many recollections from the village. He drew it, located different houses in the aerial photograph we brought and he even built a model of the wind turbine that supplied electricity to his home starting in 1936.

Eléonore and I returned with his stories and creations to Mansura and with them we created further experiences and objects. The height of this process was a public tour we organized together earlier this year, which included about 30 visitors. Most of them were Israeli friends and a few partners from the Golan, from Majdal Shams. 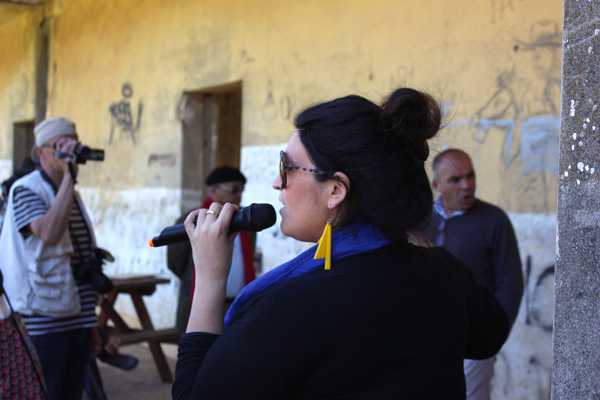 Elsinore speaking to the group at the site of the former school in the village her father came from, Mansura, Golan Heights. (Natasha Roth)

On our way back, exhilarated by the experience, it became clear to me that the story of Mansura had become my own — not exclusively mine but also my own. I realized that in Mansura, because of my connection with Eléonore, the gap between me and the memory-which-is-not-mine was almost completely gone. The fact that she carries in her our son and that there, in Mansura, he was already clearly present, emphasized further that the destroyed village was becoming home for me. The memories I collected of this place made me find a home there. It is a proto-memory, a memory I assembled like a prosthesis on top of my identity as an Israeli.

The most meaningful action was when, together with the participants in the tour, we reconstructed the frame of Farouk’s home, using the stones of the destroyed structure. While we were moving the stones we heard Farouk’s recorded voice coming out of a megaphone, telling us stories about the house and about growing up in the village. It sharpened for me the sense of intimacy in the memory of Mansura. This intimacy preceded the political. The intimate dimension gave the political dimension much power, as was evident from the reactions of the participants in this unique tour. The effort to overcome the identity of a colonizer is also physical and sensory. The body carrying stones, listening to the voices and looking at the markings of the house gradually coming into being on the land. It is a wholesome bodily politic that trains me to do the opposite of that which I learned through the agents of the Israeli regime. I build, symbolically but also physically, what Israel destroyed. The support of friends around amplifies the sense of something new being build, a new identity that is undermining the identity of an occupier.

My position as a de-colonizer became uniquely polarized in Mansura. The memory of Mansura is Farouk’s, it is Eléonore’s, and it is mine. At the same time, I do not forget for a single moment that I am also an Israeli occupier in the Golan Heights. Perhaps that is the source of the deep fatigue I felt for days after our return to Tel Aviv.

Eitan Bronstein Aparicio is the co-founder of De-Colonizer, a research and art laboratory for social change that provides materials and tools to expose and challenge the colonialist nature of the Israeli regime. Translated by Amit Gilutz. The author wishes to thank Norma Musih, Orli Fridman, Tom Pessah, Gilad Halpern for their helpful comments.