Six decades after the Nakba forced us into different corners of the world, social networks allowed us to reconnect with our families and villages. In Yarmouk, I found the people I should have grown up around—the ones who looked like me and my immediate family. And then war broke out in Syria, Facebook went dark and people disappeared, once again. 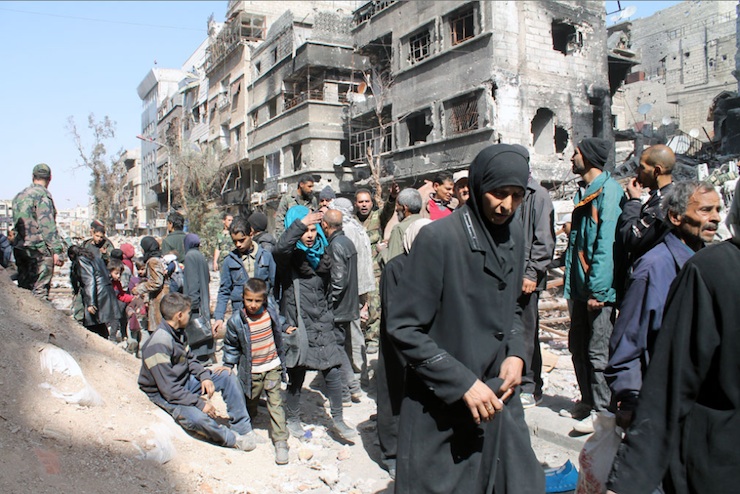 Those who do not have family members in Syria’s refugee camps can watch the atrocities taking place on the news from far away, as if it were all just one big Hollywood horror movie: one that causes deep anguish for just a few hours. But those who do have family and friends living on Haifa Street—the main road in Damascus’ Yarmouk refugee camp—or those who receive a photo of a body that looks an awful lot like an acquaintance of yours, the news coming out of Syria leaves a deep, psychological scar that is nearly impossible to deal with.

My parents, who were born when the State of Israel was founded, raised us on the backdrop of a story of refugees, the expulsion of the Palestinian people and the remains of a Galilee village that stand like a monument. Without photos, names or the residents themselves. We knew that most of our family is over there in Syria and Lebanon, and that we are here.

However, things have changed over the last few years due to social networks. I wasn’t the only one to discover those around whom I was supposed to grow up. I found relatives who are similar to my father, whose looks explain the shape of my nose or my late uncle’s full, straight hair. We got excited as we Skyped with people who told us all the latest stories and gossip. We learned who married whom; who found a Syrian wife who agreed to marry a Palestinian refugee; who is cheap and who cooks well; who studied medicine and who is the brilliant engineer. We learned that our village is alive and kicking in Syria.

Almost every Palestinian village destroyed in 1948 has its own Facebook group. The streets in Al-A’adin (“the returnees”) and Yarmouk are named after the different villages and cities that used to be home to the refugees: Tiberias, Haifa, Acre, Lubya, Al-Juwara and more. Our village even has its own women’s group on Facebook.

Read more: If only there was oil under Yarmouk

The Syrian Civil War erupted just as we began to build our virtual village and dream of our return. The horrifying battles have raged on for the past four years—four years of murder, kidnapping, Assad’s brutal thugs, his opponents and Syrian blood that keeps on spilling. Two years in which the Palestinian refugee camps were able to maintain “neutrality.” They are not part of the fighting, and that is what matters. They even told us that rebels had been hiding out in the camp, since it was safer there.

But slowly, Facebook went black and people disappeared from our screens. We breathlessly tracked the young ones who disappeared, before finding out that they were tortured, sometimes to death. Some returned, others didn’t. Some fled after their parents sold all their possessions to save their children, and waited until someone sent them a signal from anywhere in the world, letting them know that their children were safe.

As he fled from Syria on death boats that were supposed to take him to Greece, one of my cousins found himself swimming to an unknown country. He was caught by a gang of criminals in a Serbian forest who stole his money and clothing. They even took his shoes, he told us as he cried on the telephone, calling us from a police station to ask for a few dollars that would keep him alive. These kinds of stories are considered “success stories,” but they are nothing compared to the photos of victims and funerals, and this awful war whose end is nowhere in sight.

One of the most difficult descriptions of the situation in Yarmouk comes from a survivor who identifies as a Palestinian Syrian: “My feeling of helplessness is similar to someone sending you a video of your sister being gang-raped, and you insist on watching until the end. Perhaps the ending will include some kind of unexpected twist; maybe your sister will grow a pair of large wings and turn into a dragon that kills all of her rapists. That is how you know yourself, a Palestinian, a fictional tale, that is what they told you since you were a child. Always gamble on the off-chance you will turn into a brave monster that will destroy all your enemies and rapists. It’s time to erase that option from your thoughts.”

That is how I feel today, as a Palestinian who was previously opposed to describing the occupation as “rape” and Palestine as the woman. Today there is no better description as the women of Palestine and Syria are being raped every day by members of the Islamic State and others, while Yarmouk is being destroyed and attacked by everyone.

After Palestine survived the occupation of 1948 by a brutal army, most of the Palestinian people were spread out among neighboring countries. Some fled and settled in different parts of the world. We survived massacre after massacre: Black September in Jordan, Sabra and Shatila in Lebanon, Nahr al-Bared, Balata, Gaza, Jenin. And now Yarmouk in Syria. And it doesn’t matter anymore. It doesn’t matter who is to blame or who started. And all this happens with the funding of Israel, the United States or Iran.

In these difficult times I remember how Sajara, an artist and sculptor from our village, sent me a photo of a wooden sculpture he made out of wood. The sculpture depicts a beautiful Palestinian woman who is hollow on the inside. “Everyone has bitten off a piece, until it is completely empty,” he explained to me. My eyes filled up with tears. “I want this statue,” I wrote in a text message. “It is under the rubble in the camp,” he responded, “When we are liberated and can return to our village, I will make one especially for you, Samah. I promise.”

I haven’t heard from him since.

Samah Salaime is a social worker, a director of AWC (Arab Women in the Center) in Lod/Lyd and a graduate of the Mandel Leadership Institute in Jerusalem. She is a blogger for our Hebrew-language sister-site, Local Call, where this article was first published. Read it in Hebrew here and in Arabic here.