‘I have the distinct feeling that the next time we come back, none of what we are building will be here.’ 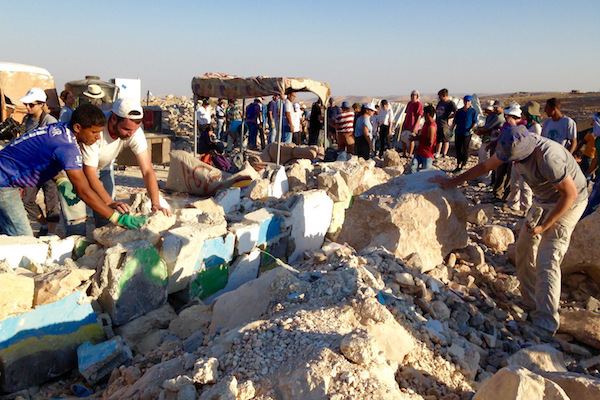 I run my hands over small jagged stones, turning over rubble and finding bits of fuzz, broken marble, plastics cups…remains of day-to-day life. I realize there’s something a bit Sisyphean to what we’re doing. I scoop up a pile of rocks and dump it into a bucket, pouring these into the inside of a makeshift wall alongside other Ashkenazi Jews, bright red, oppressed here only by the sun.

We are working with Palestinians from a rural community in the South Hebron Hills. Their structures are technically illegal, so the Israeli army recently demolished them. This happens often. But today, there’s almost 50 of us visitors, and we’re rebuilding. We all eye the yellow gate just meters away that opens to a fully intact illegal Israeli settlement — on the grid, despite our remote location. The doors remain closed on this Shabbat day while we work.

As I’m sifting, I find a stack of right-wing Likud party campaign postcards, most likely from the nearby settlement, but who knows. I once met a serious right-wing supporter who lives in the town of Umm al-Hiran, another Palestinian village slated for demolition, except inside Israel proper. Today we are in Umm el-Kheir, being watched in the West Bank by the face of this politician, wedged on these postcards beneath our work.

Here is where I’m reminded of the Greek Sisyphus, a deviant man whose divine punishment is to forever push a boulder up a hill, only to watch it roll back down again. Like Sisyphus, there’s no respite for the residents of Umm el-Kheir. When they rebuild their homes with metal siding donated by the EU, they know the Israeli government will destroy them. The point of this policy is to make the life of the damned unbearably frustrating.

With the campaign postcard in my back-pocket as memorabilia, I watch as Jews and foreigners led by Palestinian hosts, hoist the larger rocks. They stand in line passing the boulders from one hand to the next. This way, no one has to carry the weight alone.

Over where I’m working, a friend whispers to me, “I have the distinct feeling that the next time we come back, none of what we are building will be here.” Indeed, many of us have been here before, and the community center our group painted a few weeks ago is now rubble beneath our feet. I point out a painted rainbow to my roommate that he remembers from the mural. It is now broken concrete, standing on other broken concrete, creating a new wall.

Here, despair is made of broken concrete, but so is hope.

Later, as we sit cross-legged together, one of the villagers expresses concern for a few of us who are talking about coming back the next week. “Shabbat…it’s not okay in Israel to drive on Shabbat. Will they give you problems?” He’s worked inside Israel, in agriculture, for many years. We laugh, and say we’ll be fine. In fact, I decide that this workday on the day of rest, feels very right.

Our group’s visits are decidedly, paradoxically, Jewish. The Shabbat visits make me realize how “pikuach nefesh,” the Jewish principle of saving a life, might play out in my own Jewish agenda. This Jewish law supersedes virtually all other mitzvot (commandments) including Shabbat. Meaning, you can break Shabbat, and work, in order to save a life. Call it a bastardization, but this day feels like we were saving livelihoods, if not lives. We’re saving the soul, the literal meaning of “nefesh.”

Free from the Greek-style damnation that our Palestinian partners live in, we go home to Tel Aviv, to Jerusalem, and rest. Was this day just a Sisyphean exercise? Perhaps. But we’ll be waiting the moment the demolition orders come again, so we can return to pick the boulder back up together, and push.