How apt, and catchy, that the city was cut off from the rest of the country on the very anniversary of the Babylonian siege, over 2,000 years ago, which led to the destruction of the First Temple and basically the beginning of Jewish exile from Zion. 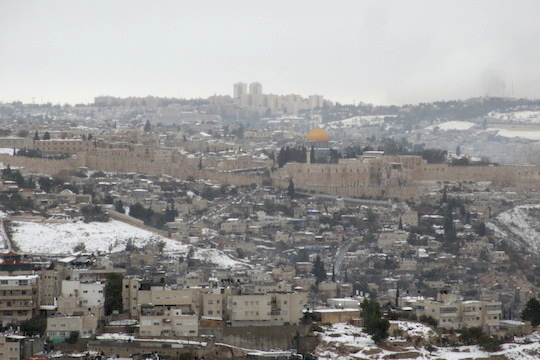 Last night, I finally opened my bedroom window. Gingerly at first, feeling very brave. After three days and nights without daring to open a single window in the house, this was a much-needed breath of fresh air, for my sanity as much as my lungs.

Three days of a long weekend in a snowed-in, paralyzed city that TV channels quickly dubbed “besieged,” in keeping with this hilly bastion’s long tradition. The reporters were palpably thrilled with the symbolism. I guess when you’re covering a massive storm that has caught an entire Middle Eastern country unprepared, there’s only so much you can report on snow levels and frantic rescue efforts. How apt, and catchy, that the city was cut off from the rest of the country on the very anniversary of the Babylonian siege, over 2,000 years ago, which led to the destruction of the First Temple and basically the beginning of Jewish exile from Zion. How damn awful that the city’s many religious Jewish residents were fasting, on the one day in the year when you most needed some hot tea and cake.

By evening, the symbolism had shifted to a much more recent and less ethereal memory. The army, which unsurprisingly turned out to be the best-equipped (read: most heavily funded) system in the country for dealing with a national logistical nightmare, was sending in tanks to break open the major artery up to Jerusalem. That’s the very same highway still strewn with the remains of Israeli tanks from the 1948 war, a pointed reminder to all those entering and leaving the capital of one of the founding Zionist stories – the tank procession that broke through the blockade to access Jerusalem.

As a Jerusalemite, I was raised on that tale of bravery, along with the stoicism of Jewish residents of the city at the time (needless to say, the school stories conveniently left Palestinians out). Living under siege with a real dearth of water and food, my resourceful urban ancestors used the wild malva plant (known by its Arabic name, hubeiza) to make what sounded like pretty yucky improvised patties, and heroically turned off the water while soaping in the shower. It was a bit disappointing that my only hubeza spotting in this siege was in endless jokes on my Facebook feed, mostly by rather envious friends from Tel Aviv who had to make do with a spattering of hail rather than our majestic foot or so of snow and contagious sense of delight. As for showers – I thanked my lucky stars for the hot shower I had every evening, mixed with a heavy sense of guilt over those who were going without.

Yes – the delight at this sudden playful “misrule,” the beauty of having this pained city blanketed in a soothing, unifying layer of pure white, quickly changed to worry. Tens of thousands of Jerusalem residents were left without power, unable to heat themselves, their food or their water supply, clinging to abbreviated text messages along the lines of “no power, saving batt, all ok.” One friend, stranded in her apartment for 48 hours with her younger brother and no power source whatsoever, spent precious battery power on a text message that encapsulated the whole mad weekend: “Took milk out of fridge so it won’t go off.”

On the second day, I went out. We put on two layers of socks, wrapped them in plastic bags, put our heaviest shoes on top of them and ventured into the world that, according to the 24-hour TV reports, sounded post-apocalyptic at best. Jerusalem has snow once every few years but it’s usually not this deep, not so early in the season, and not heavy enough to cut power lines across the biggest city in Israel. There’s a desert an hour’s drive from my home, and the national crisis mode that is so often employed here is very rarely to do with something so out of human control like the weather. 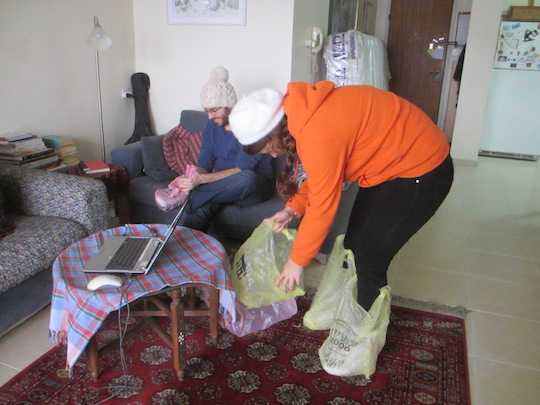 “We put on two layers of socks, wrapped them in plastic bags, put our heaviest shoes on top of them and ventured into the world.” (Photo: Michelle Bubis)

Actually, it was really fun outside. We trudged up to a promenade overlooking East Jerusalem, perfecting the unfamiliar art of snowball-throwing as we went. Jewish and Palestinian families were up there, some having fun and others standing a bit forlornly in the middle of slush that was very obviously on the inside of their boots by then. It wasn’t ideal by any standard: there was some pretty heavy mutual snowballing going on at some point, and a few Palestinian boys hurling tightly-packed bits of ice definitely weren’t smiling. 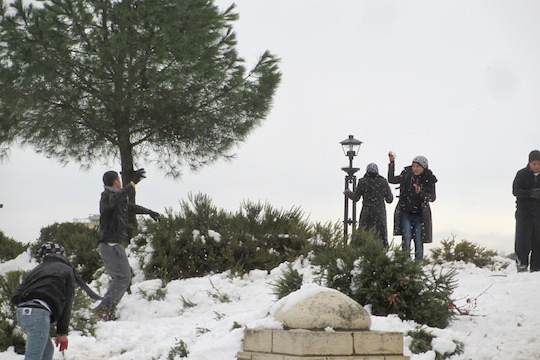 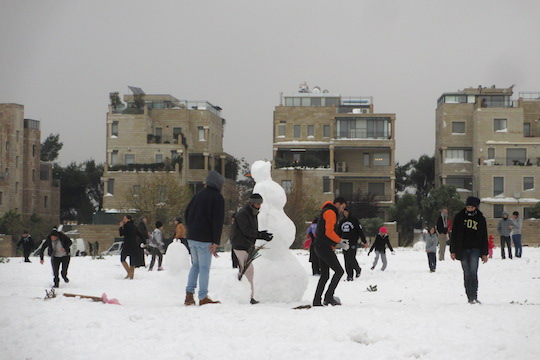 An hour before sunset, when the incessant news updates had made it clear that the storm was ending, we decided to build our own little monument. Freezing fingers were sacrificed to the cause and half an hour later we presented the world with Winston-Shaike. The sun was setting, and people driving by began stopping to admire our handiwork and ask to have their photos taken with him. Some Argentinean women were unintelligibly supportive. A Palestinian family got cute shots of their two kids poised on either side of him. A Jewish couple came up and decided he needed eyes, joined by a Palestinian group who wanted to give him a new hat. We took one last photo of them gathered around our private little contribution to the day, and went home. 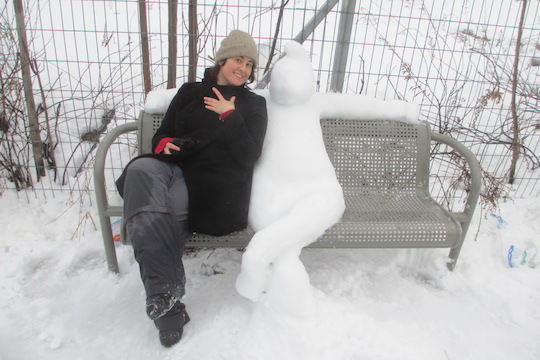 We decided to build our own little monument. 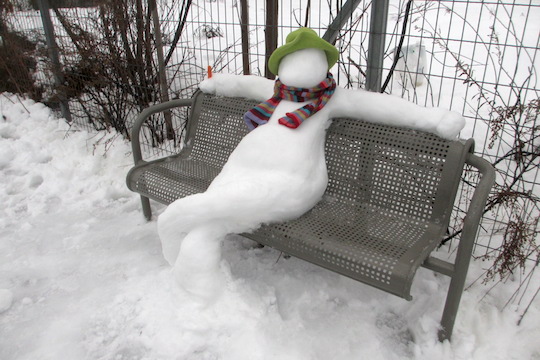 “A Jewish couple came up and decided he needed eyes, joined by a Palestinian group who wanted to give him a new hat.” (Photo: Michelle Bubis) 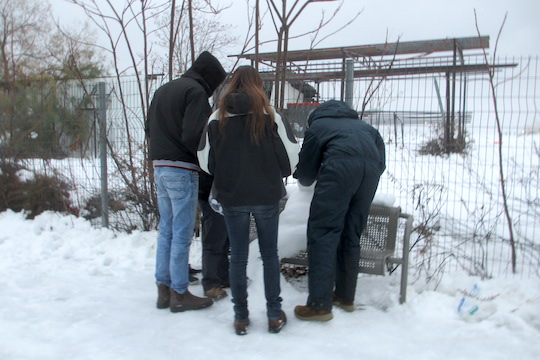 “We took one last photo of them gathered around our private little contribution to the day, and went home.” (Photo: Michelle Bubis)

Related:
‘Snow makes everyone equal for a day on Hebron’s Shuhada St.’