As world leaders attempted to, once more, broker a humanitarian ceasefire between Israel and Hamas on Monday, the IDF announced that five Israeli soldiers were killed over the course of the day. Four of them were killed by mortar shell fire near the border with Gaza, while a fifth was killed in clashes with Hamas militants in the city of Khan Younis in southern Gaza.

The Israeli Air Force pounded the Strip into the early hours of Tuesday morning, a day after its airstrikes killed a total of 44 Palestinians. Another 12 bodies were recovered from the rubble by medical teams earlier in the day, according to Ma’an News Agency. 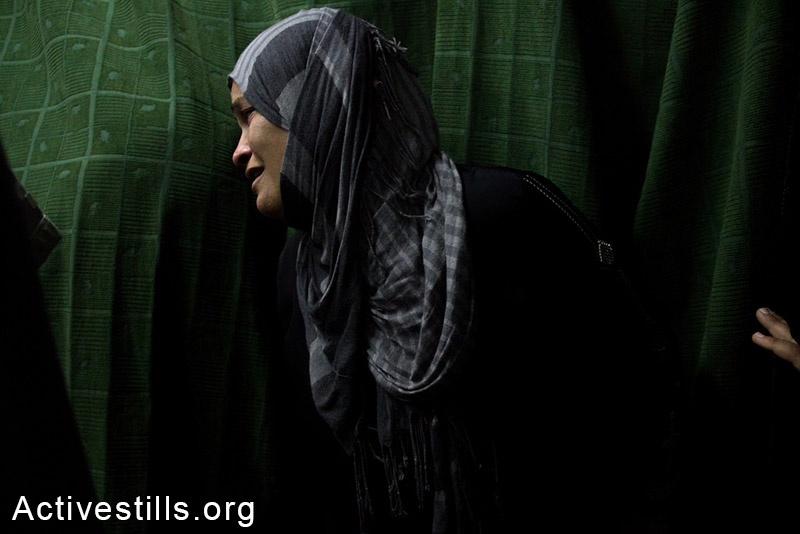 A woman mourns for her young child, killed by an Israeli airstrike over an UNRWA school in Beit Hanoun, July 24, 2014. (Anne Paq/Activestills.org)

Ma’an also reported that 10 people were killed Monday afternoon by an Israeli air strike on a children’s playground in al-Shati refugee camp. Families had gathered to celebrate the first day of the Eid al-Fitr holiday, which ended in horror with eight children among the dead. Although Israel blamed the deaths on a misfired Islamic Jihad rocket, eyewitnesses, along with Gaza police who inspected the rubble and victims’ bodies, confirmed the strike was Israeli.

Gaza Ministry of Health Spokesman said over the last 21 days, a total of 1,088 Palestinians have been killed and 6,470 have been injured. Of the dead, 251 were children and 50 elderly, while 1,980 children and 259 elderly have been wounded.

Earlier on Monday, five Palestinian militants breached the Israeli border and opened fire at IDF soldiers near Nahal Oz on the border with Gaza. The soldiers returned fire, killing one Palestinian. According to the IDF, the other militants retreated to the tunnel shaft from which they came, and an Israeli aircraft in the area did not manage to target them.

In a press conference Monday evening, Prime Minister Benjamin Netanyahu said that Israel is prepared for a prolonged operation in Gaza, saying that “there is no war more just than the heroic one our sons are fighting in.”

“Bravery and determination are needed to fight a terror group which seeks our destruction,” Netanyahu stated, adding that the operation would not end before the tunnels from the Gaza Strip were neutralized.

Related:
Why did Israel reject Kerry’s ceasefire proposal?
PHOTOS: Gazans use ‘ceasefire’ to pick up the pieces