When Shefaa was granted permission to leave Gaza for a four-day visit to Israel to meet with a group of Jewish and Palestinian women, it was nothing short of a miracle. There she could tell her story and dispel the myths about life in Gaza. 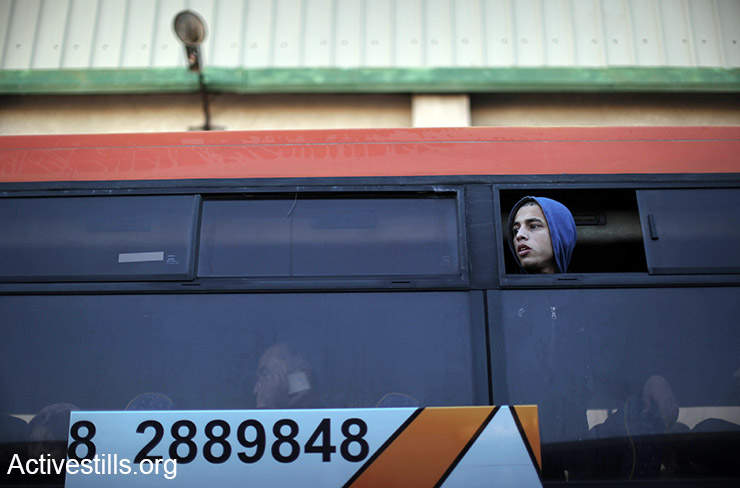 A Palestinian teen travels on a bus from Gaza to Egypt, Rafah crossing. (photo: Ezz Zanoun/Activesills.org)

All at once the activities marking International Women’s Day came to an end. Conferences, lectures, and ceremonies alongside commercials for spas, malls, and Botox — which were supposed to cause women joy for one day, while making the credit card companies extremely happy.

But before I allow capitalism to take over this article the way it took over International Women’s Day, I want to talk about the weekend I spent with a group of young women — Arabs and Jews from Israel and Palestine — to talk about women and war.

I tried to take advantage of this project to encourage one young woman, Shefaa from Gaza, to join the group. Maybe, just maybe, there will be a miracle and she will be able to get a permit. After three years of knowing each other from afar, two wars, the death of her aunt in a Jerusalem hospital, and her father’s surgery in Israel, her family was able to leave the prison that is Gaza for serious medical procedures. Shefaa, however, was not able to leave. Her dream was to visit Nazareth, Tiberias, Jerusalem, and Haifa. Shefaa (not her real name) is 30 years old, works with women in Gaza, a fashion designer with embroidery, and a member of a Gaza youth community initiative.

We speak on the phone and send messages back and forth. I get updates from her — like from other women — about the situation in Gaza. I did not believe her when she both Hamas and Israel allowed her entry permits.

Shefaa called to ask if I wanted her to bring me anything from Gaza. I’ll bring whatever you’d like, she told me over the phone. I laughed at this Arab custom, even among those with little means. The response is always, “No thank you, thank God we have everything, only you are missing.” So I responded with a smile: “Yes, bring yourself in one piece, you are the biggest gift I could ask for from Gaza on Women’s Day. See you soon.”

Our first meeting was very emotional for me. A long hug, tears, kisses, and another hug. Even the other group members who did not know her became emotional.

Shefaa wanted very much to talk about the outside world face to face, and with anyone who would listen. She wanted to talk, breathe, and feel she was alive. She described the harsh reality in post-war Gaza, where families survived the winter living in tents ad caravans, where the elderly remained alone after their families were wiped out. She described the thousands of disabled people, the never-ending mourning, and the deep despair among young people who are committing suicide in higher numbers. “There are people who want to live in Gaza, they love life just like other people do, I don’t want people to have mercy on the women in Gaza,” she said. 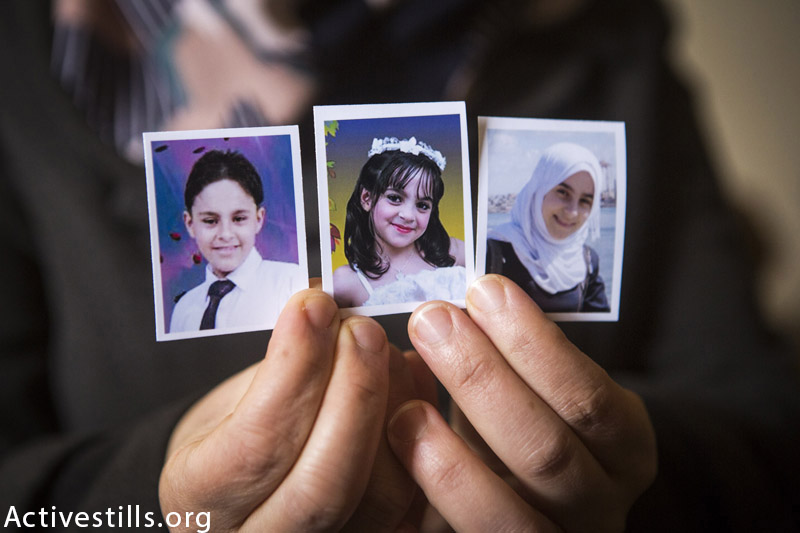 Photos (from left to right) of the killed siblings Mohammed (12), Yara (8) and Nadeen (16) Mahmoud Al Farra, held by their mother in their home in Khan Younis, February 22, 2015. 9 members of the Al Farra family were killed in the street by an Israeli missile while they were fleeing their home after it was attacked on August 1st, 2014. (Anne Paq / Activestills.org)

“Despite the pain and the blood spilled, we are helping each other get stronger. There are initiatives by young people and women to strengthen community responsibility, the help the victims of the destruction and murder of the last war. A group of young people decided to help the elderly who were left with nothing, to make sure they have as much food and medicine as possible. We don’t have money to help them, but we visit them once a week.

“I started a club called ‘Women and Business,’ where I live and women embroider, sew, and cook homemade food. Everything is small and simple, the point is to work and feel that there is a way to fight the occupation — not just the Israeli occupation, but the occupation of despair,” Shefaa says.

Hamas? What about Israel?

One of the most difficult moments in the group was when Shefaa tried to answer a question whose subtext was, “if life is so bad for you, why don’t you resist?” Something in the Israeli mind does not understand how Hamas, which is described by the Israeli media as a monstrous, murderous organization, can survive and get stronger all the time. Where the is the intifada against Hamas? 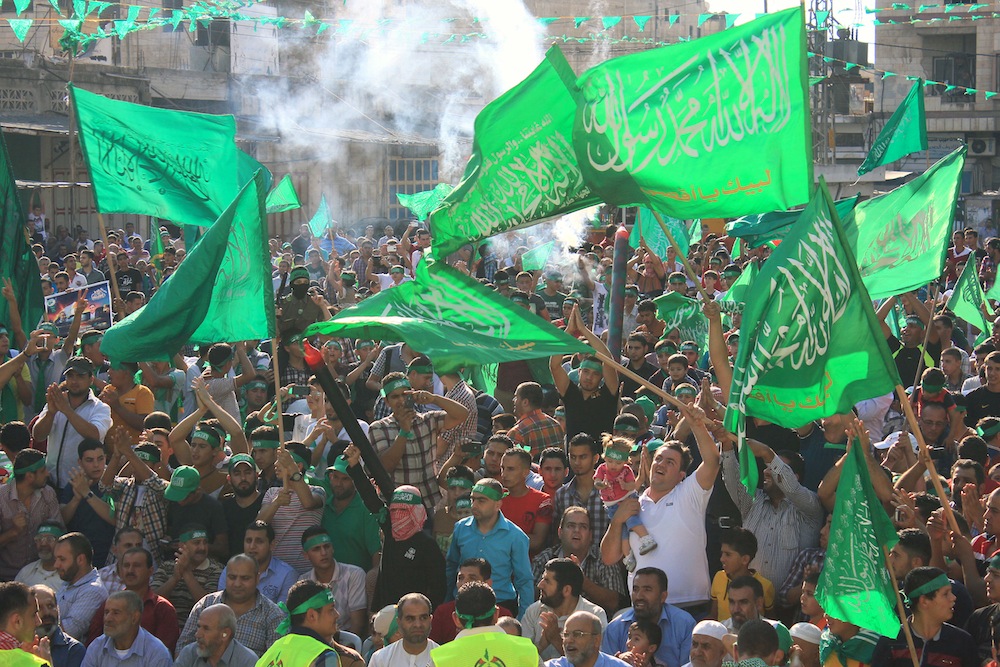 The long and painful answer was summarized in one small word: because of you. Because of Israel. In the past Gaza’s residents would work, make a living, and study. It was difficult but tolerable. The Fatah-ruled Palestinian Authority was in power. It was clear that it gave more to its supporters and preferred Fatah members over Hamas. But for a moment the Palestinians believed that there was an opportunity to change reality. And then came Hamas and promised social justice, an equal slice of the pie, Palestinian pride, liberation from the occupation, and more.

A despondent nation elected them, just as any nation searching for change. And then it turned out that they were exactly like Fatah, and the street wars began: gun battles in the street, PA members — in coordination with Israel — left Gaza on buses. Then came the blockade.

Israel implemented the blockade in order to punish the Palestinians for making the “wrong” choice — since then everything has grown worse. In order to rule 1.5 million hungry, desperate Palestinians, one needs a lot of power and fear-mongering. Those who open their mouths are taken to prison, and often do not return. 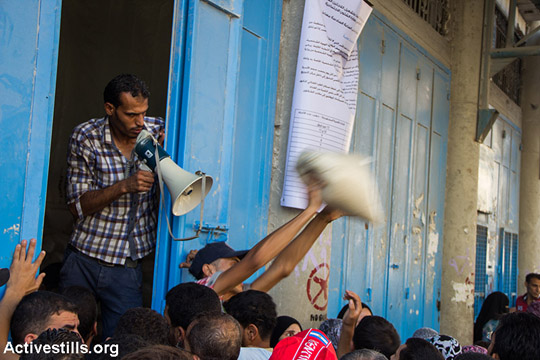 Asking why you don’t rise up is a funny question. When there is no entrance or exit, when there is no law or government, no money or hope, when the only constant is Hamas’ aggressive security apparatus — the people become hostages.

But where is Israel in this story? Aside from the fact that Israel supported Hamas at its initial stages in order to weaken Arafat’s rule, Israel also silences Hamas’ opponents with every war on Gaza. Every time calls of opposition begin to be heard, Gaza is struck with rockets and bombings. Every time is worse than the last, crueler and bloodier. Gaza makes headlines, Hamas’ resistance is glorified, and we go back to dealing with daily survival. That’s the name of the game. Every time that we are close to a political sea change in Gaza, the occupation comes along and strikes us. Who would dare speak of replacing the Hamas regime in a time of war? How can we protest when planes bomb the buildings Hamas itself built? How?

The people of Israel do not really understand how Gazans are silenced, or how they are resigned to shut their mouths and open it only when they eat canned food provided by UNRWA.

‘Sorry, I am ashamed’

At one point Shefaa took out her green ID card, her passport, and her entry permit. “These are the documents that rule my life. Only in the run-up to my visit did I renew my ID. It has been 15 years since I last used it, I have no use for it. I do not leave and will not leave. This passport was signed one time alone when I traveled to Amman as a teenager. That’s it. Since then I haven’t used it. And this colorful paper, my exit permit, is for four days only. I was able to leave prison for four whole days. I cannot go to Ramallah, only Israel, and I cannot visit Eilat. Israel, and Egypt that cooperates with it, have jailed us for over a decade. Do you understand why Israel is responsible?”

I cried as I translated for her. Most of the women remained quiet and listened.

One of the Jewish women asked to speak as the tears rolled down her cheeks. “I want to tell you something. It is important that as a soldier I served in Rafah. I checked these papers all the time, I controlled the lives of people like you, it was my job. I want to apologize. I am sorry. I am sorry that I did that. I am ashamed.” The young, brave Jewish woman then stood up and walked out of the room, leaving behind her 20 Palestinian women from the West Bank, Shefaa from Gaza, Palestinian citizens of women, Jewish Israelis and three discussion leaders. We all sat in a giant circle in a small room at the top of a hill in beautiful Nazareth and just cried.