Athens — At a press conference held at 3pm local time on Thursday, organizers of the US boat to Gaza, The Audacity of Hope, unveiled their ship to international press corps. Roughly 70 journalists , including a news crew from Israel’s Channel 10 as well as other Israeli journalists, were in attendance. Organizers defiantly called on the government of Greece to allow their boats safe deployment and passage.

Former US army colonel Anne Wright, speaking on behalf of the US ship, demanded that the Greek government follow through with inspection of the ship, following an Israeli legal organization’s accusation that it is not seaworthy. Wright insisted it is seaworthy and that “The Greek government is complicit with the Israeli government in delaying and trying to stop our boat from sailing.”

During the press conference, all 35 passengers of The Audacity of Hope stood in front of the ship draped in American flags. Wright specifically called on the Greek government to protect the US boat from acts of “state terrorism,” referencing the alleged sabotage of Irish boat. According to Wright, the Irish boat has 20,000 Euros worth of damage and would have sunk if it left port. 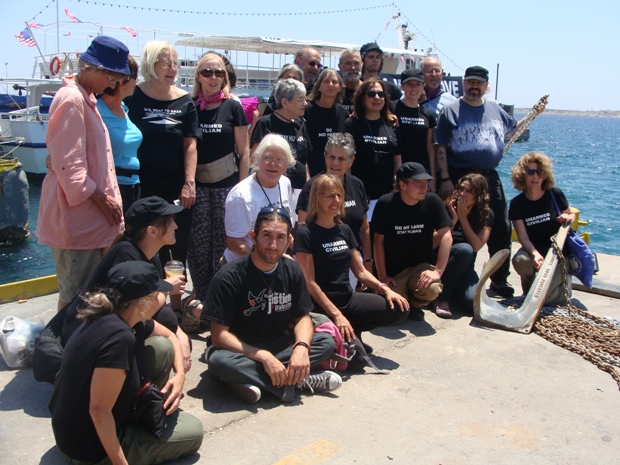 Participants of the US boat on the 2011 Gaza-bound flotilla in Athens, June 2011 (photo: Mya Guarnieri)

Pulitzer-prize winning author Alice Walker, a passenger on the US Boat, read letters out loud at the press conference (the boat is carrying over 3,000 personal letters from Americans to Gazans).  One letter had a huge illustration of a smile and said: “Smile, the world loves you.” Walker compared the situation in Israel to that of South Africa during apartheid, saying that “our ancestors would be upset if they knew we were standing by in silence and not in solidarity with the Palestinian people.” Organizers spread out the the thousands of letters on the lower deck of the boat for the press to see.

Before the press conference, the boat organizers invited press onto the boat, which was opened and exposed to disprove any allegations there was dangerous cargo on it. The Israeli news crew took a tour of the boat, filming every crevice.

UPDATE: In a public speech at Israel’s Air Force academy, Prime Minister Binyamin Netanyahu thanked Greece’s PM George A. Papandreou, as well as US and Europe’s leaders, for helping Israel in its effort to stop what he called “the provocative flotilla.”

Joseph Dana is in Greece reporting for The Nation, and about to embark on the American ship to Gaza.