The ship’s organizers had decided to sail without permission from the Greek authorities, claiming delays in its departure were politically motivated. Earlier, Greece issued a blanket ban on all ships sailing to Gaza from its ports. 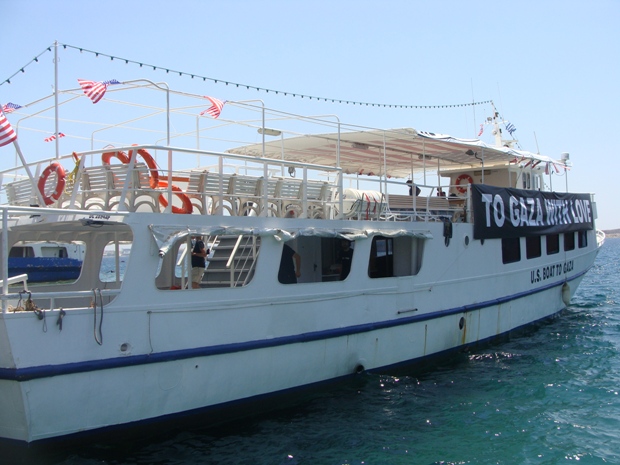 The US boat of the 2011 Gaza-bound flotilla at Piraeus port, Greece (photo: Mya Guarnieri)

The Greek Coast Guard intercepted the Gaza flotilla’s American ship this afternoon, less than one hour after it had set sail from the Athens port. The Greek authorities demanded the boat return to the port, resulting in a protracted standoff at sea, with the captain of the U.S. boat in talks with the authorities over their demands. After a couple hours, and under the threat of an armed takeover by the Greek authorities, the boat agreed to be escorted back to land. It arrived at the Athens coast guard port at roughly 8.:30 PM local time. As the time of writing, most reporters have left the boat, but the passengers remained on it.

It emerged that just before the boat had set sail, Greece issued a blanket ban on ships sailing to Gaza from its ports. According to the decision, approved by Minister for Citizen Protection Christos Papoutsis, the “broader maritime area of eastern Mediterranean will be continuously monitored by electronic means for tracking, where applicable, the movements of the ships allegedly participating in such campaign” [to sail to Gaza].

The boat, named the Audacity of Hope, left the Athens port at 4:30 PM en route to the Gaza Strip, carrying 35 passengers, five crew members and 11 journalists. It departed without permission from the Greek authorities to sail.

Former U.S. Army colonel Anne Wright, leader of mission, told +972 soon after the ship set sail that it is “defiant in going to Gaza. Israeli and Greek won’t pressure won’t stop us.” Along with its 51 passengers, the ship is carrying letters for the people of Gaza. Israel’s Channel 1 TV looked though the entire boat before its departure.

Around the time the American boat was stopped by the Greek Coast Guard, the organizers of the Canadian ship said in a Twitter message that they are being held at port by the Greek authorities:

On Friday evening, Haaretz reported that Greece had promised Prime Minister Benjamin Netanyahu on Thursday that it would stop the flotilla. Israel, the report said, used its influence in recent months to help the Greeks in their negotiations with the European Union regarding the country’s financial crisis. The two governments had also tightened their military cooperation. “The flotilla organizers’ didn’t understand that this year’s Greece is not last year’s, and they paid a price for it,” an Israeli source told Haaretz. Also on Thursday, Netanyahu, speaking at an Israel Air Force academy ceremony, singled out the Greek prime minister in thanking world leaders assisting Israel in working to stop the flotilla.

Earlier this week, organizers said that they have complied with all requests to inspect their vessel and its “seaworthiness,” claiming the boat is seaworthy and that the pressure from the Greeks is politically motivated. In order to prove this, they have decided to sail and test the Greeks authorities’ reaction. The captain told me in an interview from the wheelhouse that he expects to be arrested and personally fined for his actions, despite the fact that he claims to have done nothing wrong legally.

Joseph Dana is in Greece reporting for The Nation from the American ship to Gaza.

BECOME A MEMBER
More About flotilla

No, Arab MKs don’t ‘care too much’ about the occupation
Israel’s Arab politicians are often attacked for ‘dealing too much’ with the Palestinian issue. But if they don’t speak up for a people who lack even the most basic civil rights, who will? One of the most-repeated criticism of Israel’s Palestinian members of Knesset, which always come up around election time, is that they “deal…
By Haggai Matar March 1, 2015

Turkey must fulfill its pledge to Israel
Netanyahu publicly placed his reputation and his country’s pride on the line in order to appease Obama and improve relations with Turkey; by ignoring its already agreed upon terms, Erdogan will make the Israeli people less likely to support another far-reaching agreement. By Aaron Magid At the end of a much-anticipated trip to Israel in…
By +972 Magazine September 4, 2013