According to government sources, the army doesn’t have any evidence that the flotilla activists are planning violent resistance, yet it publicly accuses them of conspiring to murder soldiers 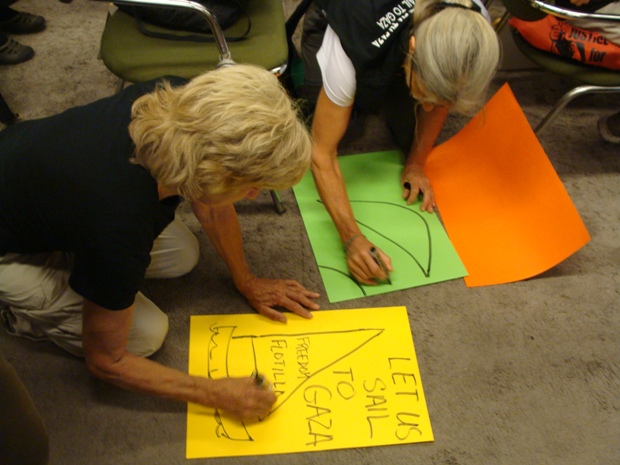 The top story in two of Israel’s leading daily papers yesterday was a bombshell: The IDF unveiled plans by flotilla passengers to kill soldiers trying to stop the ships from getting to Gaza.

Yedioth Ahronoth, Israel’s most widely read paper, ran a headline declaring “Flotilla activists set to kill,” which was attributed to military sources (but only in the fine print). The story declared, “Intelligence information revealed violent plans.” In the inside pages, the headline declared that this flotilla is considered to be “more violent than the previous one.”

Maariv’s top story covered the same topic: “IDF intelligence reveals: Lethal acid on flotilla boats.” The free paper Israel Hayom had a smaller headline in the front page. “Fear: Flotilla activists will try to kill soldiers.” Haaretz is the only paper that didn’t give the story such prominence in its print edition, but it was the top headline on the paper’s website throughout the previous evening. The Jerusalem Post’s headline read “IDF: Some flotilla activists planning to kill soldiers.”

You can view all front pages of the Hebrew papers in this pic, taken from the media blog Velvet Underground. Yedioth and Maariv are the bottom two. 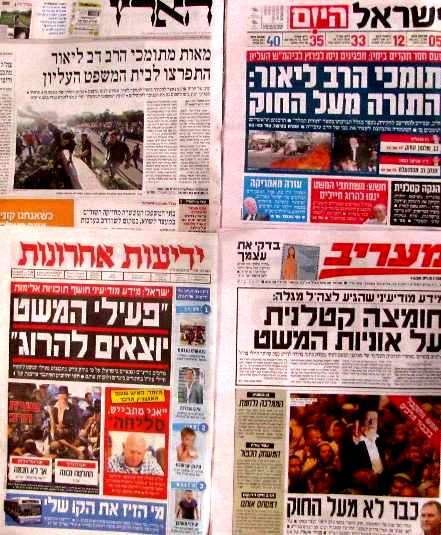 Chemical Weapons? Against the Israel Navy Seals, Air Force and war ships? Even as a suicide mission, it sounded too fantastic. And how could this flotilla be “more violent,” when the notorious IHH, whose members were on the Mavi Marmara last year, cancelled its participation? Who exactly is going to execute the soldiers with the lethal acid, 64- year-old Alice Walker? It was the kind of propaganda no thinking person could believe, yet the entire Hebrew media – even Haaretz! – went for it.

Luckily, it didn’t take Max Blumenthal to debunk this one. The media’s tone today was entirely different. Government sources have told Maariv that the so-called “intelligence information” was a spin by Prime Minister Binyamin Netanyahu, reflecting “a Hasbara [propaganda] hysteria.”

“It’s unthinkable that in cabinet meetings we receive information according to which there are no threats of violent actions from the flotilla activists or [indication of] the presence of terror elements on the ships, and that at the same time, senior political sources, including the army, feed the media with information that is the exact opposite of what we were given.”

Information that the media was only to eager to swallow, one should add.

A day too late, Yedioth Ahronoth’s military correspondent was the voice of reason in his paper:

“There isn’t a shred of evidence that extreme elements will initiate resistance against IDF soldiers. There is no knowledge of the existence of firearms on the ships.”

The damage, however, was done. The reports of the murderous intentions of the flotilla activists traveled around the country and across the world. Not for the first time, a group of unarmed European and American activists traveling on old yachts was presented as a threat to the security of the region’s superpower. The only question is: for how long will the world continue to buy these kind of stories?