Do Sarah Netanyahu’s scandals serve as a lightning rod for her husband? They are, after all, business partners

Mrs. Sarah Netanyahu, as she demands others refer to her, was once again in the midst of another scandal this week. This time, the claims were she was treating her old father’s caregiver, Nepalese Tara Kumeri, like a particularly nasty brute (Hebrew). The Missus has not only refrained from paying Kumeri her due – the Missus was charged with doing precisely this several times in the past – she has also called her, according to Kumeri’s complaint, a “Nepalese piece of garbage”. The Missus has fired Kumeri a few days ago, citing as reason an incident in last January.

Hold on. January? If that incident was indeed so serious, why did The Missus continue to require Kumeri’s services? Ah, simple: It’s so much easier mistreating foreign workers. They have a good reason to be afraid of complaining: Following her dismissal, Kumeri is likely to be deported soon.

But Sarah Netanyahu – brute though she may be – is not the issue. She serves, if anything, as a lightning rod for her husband. The fact Netanyahu used his bureau’s PR services for The Missus, until he was reprimanded by the Counsel General – basically, we all paid for The Missus’s PR this week – is of some importance, but still not the real issue.

As the Israeli media keeps ignoring (Hebrew), Binyamin and Sarah Netanyahu are not your ordinary taxpayers: They are managing a licensed company, Netanyahu B.S. (the latter acronym is, alas, much less funny in Hebrew), or at least were doing so last year; they did not publicly deny the fact. When Sarah Netanyahu withholds her workers’ pay, or pays less than the legal minimum wage, she does it on behalf of a company in which her husband is a senior partner. For Binyamin Netanyahu not to know of these violations of labour laws, he has to be very good at willful ignorance. 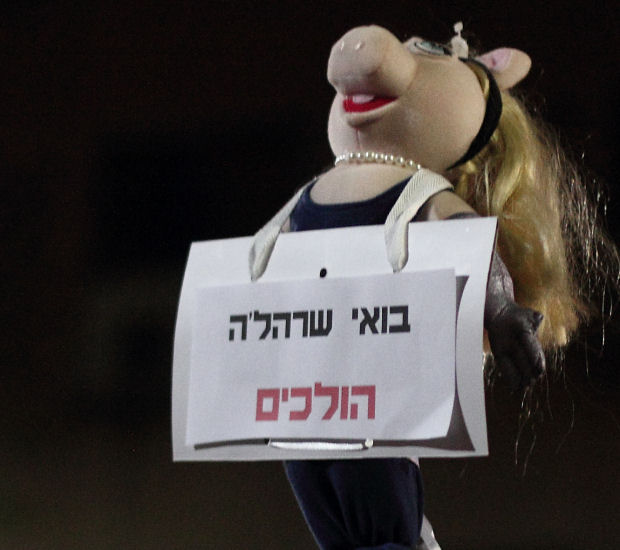 Why, come to think of it, do the Netanyahus have a company? Creating companies as tax shelters for private people who are not actually a company has become very common in recent years, for a very simple reason: In Netanyahu’s Israel, a company pays less tax than employees. One of the cornerstones of Netanyahu’s economic policy – which has proven to be such a stellar success in Zog – is the lowering of corporate tax.

The bare minimum of social responsibility is payment taxes. The Netanyahus, as every Israeli knows, dislike paying – and not just taxes, but even for hotels or restaurants. We are speaking about the only politician in the known universe, who, when flying on vacations paid for others, takes with him suitcases full of dirty laundry, so they can be sent to the dry cleaners of his fancy hotels. The creation of a company as a tax shelter is, certainly, legal, even when done by someone who once said he considered becoming the Treasury Minister of Italy and his wife, who told a political activist as far as she is considered, Israel can burn down. Legal, yes; but it stinks as much as his internationally-travelling laundry. Public figures are not expected to act like tycoons. One should also wonder why Netanyahu, who kept haranguing against the employment of foreign workers, employs one in his house. Again: Legal, yet stinking. Caesar’s wife ought to be clean even of suspicion.

When Binyamin Netanyahu is a partner – actively or passively, directly or by turning a blind eye – to the defrauding of workers, to the delaying of their salary, to salaries lower than the legal minimum, and perhaps even to the fact they are bullied under his own roof, he shows in the clearest way possible what he thinks of common people. So far, our so-called gotcha media did not ask him this question.

Its time has come. Tomorrow night, masses of Israelis would have the chance to shout it in the streets, and make it clear to the royal couple their time is over. Let’s hope they do so.