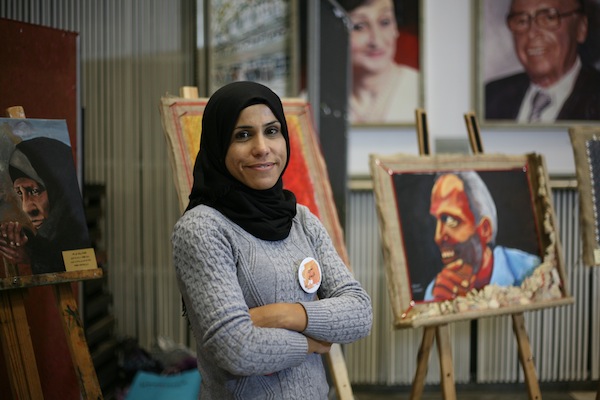 If you were to enter Ben Gurion University in Be’er Sheva earlier this week, you should have been able to see an exhibition on how Bedouin in the Negev contend with home demolitions. But due to alleged security concerns, the exhibition was disrupted and partly cancelled.

The exhibition, entitled “Demolition Order,” organized by the Braya Gallery student group, collects paintings and photographs that reflect on “the situation created by the demolition of houses and the implications for society.”

According to the Braya Gallery, the exhibit was approved by the university, but was partially cancelled after pressure from the Student Association. Beyond the cancellation, the student group also met with attempts to censor the contents of the exhibition.

Artist and Braya Gallery Spokesperson Ahmad Abu Bader said that the group received approval to present the exhibition for three days. However, before the exhibition was even mounted, the timeframe was reduced to just two days, December 10 and 12, respectively. By the time the exhibition was set up, only one day remained: International Human Rights Day, which fell on December 10.

Abu Bader told +972 about the attempt to put up the exhibition on Sunday: “When we started working in the space we had been given, the head of security came and looked at my piece and said: ‘move this rubbish from here.’”

“Part of the university’s approval process for exhibitions on campus is a presentation of all the work that will be shown. In the presentation, we detailed everything that would be presented,” explained Abu Bader. “Their aim was singular: to destroy our exhibition.”

“What I am opposed to is the language and approach they took with us,” he continues. “I’m not unreasonable. If I’d received a genuine reason, I’d have done what they asked. They just wanted the exhibition gone. I insisted on the presence of my piece in the exhibition.”

After the arrival of the university’s president at the scene, an emergency meeting was called and the exhibition was allowed to remain, but only for one day, and only until 4 p.m., as opposed to 7 p.m., as had been previously agreed. 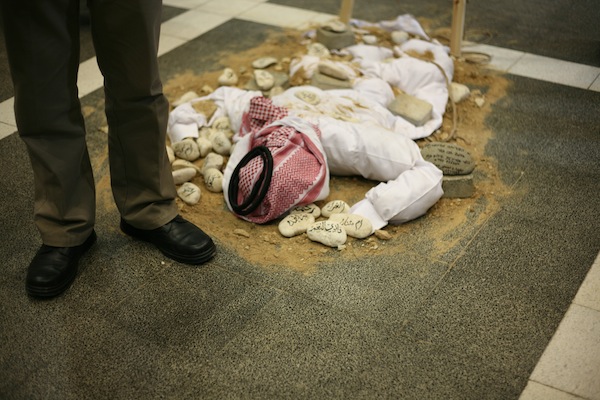 “I had already invited people to see the exhibition and told them it was open until 7 p.m. The conditions for the exhibition just kept changing,” said Abu Bader.

In the eyes of Joint List MK Juma Azbarga, Demolition Order should be “shown elsewhere, outside of the Arab context. There are 55,000 homes without permits in the Negev and on average 1,200 buildings receive demolition orders each year. It is important that this issue receives attention. Debate and protection of minority rights are central parts of any democracy.”

The students chose International Human Rights Day intentionally. “Our aim with the exhibition is a humanitarian one, that’s why we chose International Human Rights Day. We wanted the exhibition to have a human rights message, not a political one,” says Abu Bader. “Winter is coming and leaving people without a roof is a human rights issue that needs to be discussed.”

When asked if they had plans to show the exhibition elsewhere, Abu Bader replied that they were open to suggestions, “though we are just a group of students,” he said. “We don’t have a budget or transportation means. It is an independent project. We really tried — that is what is so frustrating.”

The Students Association turned to the student dean in order to gain approval for a one-day exhibition, which he then accepted according to the view that the university, like all universities, is a pluralistic institution that respects freedom of expression and thought.

Maya Avis is a legal anthropologist affiliated with the Graduate Institute, Geneva and the Human Rights and Global Justice Center, New York. Her work focuses primarily on the Naqab-Negev region of southern Israel.