Two years ago Herzog adamantly stated that the Labor party principally opposes disqualifying any Knesset candidates. Now, in what appears to be the groundwork for joining a Netanyahu government, he and Tzipi Livni want to stop Haneen Zoabi from running for office. 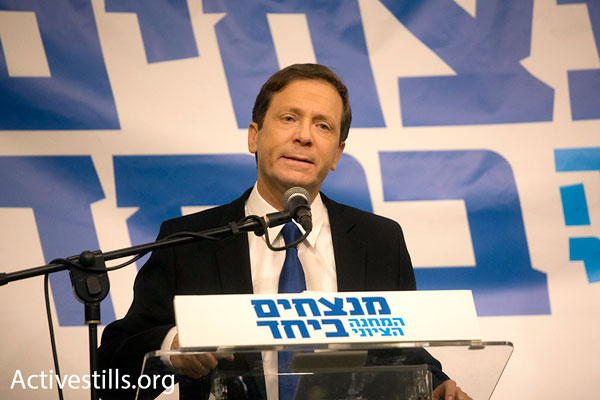 The Labor Party and Tzipi Livni’s joint list, “The Zionist Camp,” announced this week that they will support a request to disqualify MK Haneen Zoabi and Kahanist settler Baruch Marzel from running in upcoming Knesset elections. The motion to disqualify the Balad MK is expected to pass by near consensus in the Central Elections Committee — with the support of everyone from Jewish Home to Labor. Meretz is the only non-Arab party expected to oppose Zoabi’s disqualification.

Disqualifying Zoabi has become an Israeli political ritual in recent years, but one in which Labor hasn’t always taken part. In the most recent elections Labor opposed Zoabi’s disqualification, on the grounds that “some things are more important than hot-bloodedness,” specifically, basic democratic values. There is a video of Labor leader Isaac Herzog at the time making an impassioned speech against Zoabi’s disqualification at the Central Elections Commission. Among other things, Herzog said:

Civil liberties, the freedom of conscience and expression, and the right to be elected, are all basic rights that can’t be violated even when it’s the most difficult … We in the Labor party, as a matter of principle … oppose disqualifying anybody.

So what changed? Firstly, Herzog now sees himself as a candidate for the premiership. Secondly, the Zionist Camp is down in the polls. Nothing has changed about Zoabi. The disqualification is an attempt to attract voters from the Right and to improve Labor’s position and interests in the Center-Left political block — to throw Meretz a life-line by making themselves seem less “lefty,” and to steal a seat or two from Lapid, Kahlon or even Likud.

But even in political theater there are basic principles that cannot be compromised. Relations between the Arab and Jewish citizens of Israel are one of them. It is the most volatile and sensitive issue, which was expressed in demonstrations and acts of violence this past summer — primarily against Palestinian citizens of Israel. One of the central sources of hope for a Herzog victory was the prospect that he might stop the steady stream of fuel the Right has been pouring onto that bonfire. Backing the attempt to disqualify Zoabi in these elections is far more than an election stunt meant to steal a few votes from Avigdor Liberman — it is the Labor party becoming Liberman.

Considering that in both Labor and even Meretz there are people who wouldn’t mind seeing Zoabi exiled from the Knesset, it’s important to say clearly: Zoabi is being persecuted for words, not acts. If there were concrete accusations against her, for taking part attempting to break the Gaza blockade onboard the Mavi Marmara, for instance, she would be brought to court, like former Balad chairman Azmi Bishara. (Bishara is living in exile since being accused of espionage.) Rehavam Ze’evi waved a sub-machine gun in the faces of Israeli soldiers and wasn’t disqualified from running for Knesset, MKs Ze’ev Elkin and Uri Ariel leaked information on IDF troop movements to settlers ahead of planned evictions and demolitions. All Zoabi has to do is insult an Arab police officer and the whole country is on its feet.

The real problem with Zoabi is that she says things that are outside the mainstream Israeli consensus. But the things she says are not outrageous among the Arab public (although there are a considerable number of people who disagree with her). The Knesset is the parliament for Palestinian citizens of Israel as much as it is for Jewish citizens, and it’s important that Zoabi is there; it’s important that significant segments of the public enjoy parliamentary representation. And that’s without even touching on the simple fact that far worse things are said about non-Jewish citizens inside the halls and plenum of Israel’s Knesset. If the Knesset equally applied to Jews and Arabs its restrictions on speech, half of its parliamentarians would be out looking for jobs.

It is nothing short of fraud for the Labor party to equate Zoabi and Marzel. There are no lack of outspoken Kahanist representatives in Israel, but Marzel has crossed far more lines. During my own military service I personally saw him going around Hebron attacking passersby: spitting, throwing stones at rooftop water heaters and windows on Palestinian homes in Tel Rumeida, pushing. If Haneen Zoabi had spit on a Jew on the street and then broken the windows of her Jewish neighbors — then maybe there would be room for comparison. By the way, I’m not convinced that Marzel should be disqualified either, but there is no connection to Zoabi.

Herzog is supposed to know that. Hell, Herzog does understand it, as is evident from his speech to the Elections Commission in 2012. The chairman of of the Labor Party is molding himself into a successful politician of sorts — but also as somebody who won’t stake out a single original or principled position if his life depended on it. Herzog is being pulled out by the tide of public opinion, and in the process, making clear where he is heading: sitting in a coalition government with Benjamin Netanyahu and Avigdor Liberman. If he thought for a moment that he had a chance of forming a government on his own and becoming prime minister, he would need the support of the Arab parties in the Joint List. But if he’s not heading the government and the Arab parliamentarians’ support role is no longer necessary, then he can start fighting for votes with Liberman.

It’s fairly likely that the Supreme Court will reverse the Central Elections Commission’s decision to disqualify Zoabi. When the Commission disqualifies an entire political party the decision can be appealed to the Supreme Court. Contrarily, the Commission cannot even disqualify an individual candidate without the Court’s approval. (In practice, election disqualifications always reach the court.) The reason for the procedural difference is that there is something especially dangerous about a majority of MKs deciding who is and isn’t a legitimate elected representative. What is being said about Zoabi today is the same as what they used to say about Ahmad Tibi — and if she is disqualified, somebody new for them to attack will be elected in her place.

As far as the Right is concerned the entire Arab representation in Israeli politics is illegitimate. If Labor and Yesh Atid keep sliding rightward then all of the Arab politicians will eventually be disqualified. If the mainstream consensus shifts in that direction, the courts inevitably follow. It also clear where that path leads: a complete boycott of elections by the Arab public. That’s how an electoral calculation turns into political stupidity — without Palestinian votes the Left cannot survive, morally or politically — and relations between Jews and Arabs will devolve into a terrifying new place.

It seems Livni and Herzog understand that as well, which demonstrates not only their lack of resolve but also their willingness to brush aside national interests when their personal political interests are at stake. Even worse is the gall to continue pointing to that as the difference between them and Netanyahu.

But this story is far larger than Haneen Zoabi. The radical right wouldn’t have been able to become such a politically and ideologically dominant force without the acquiescence of the Center. On its own, it doesn’t amount to a force to be reckoned with. The most significant change that took place in Israel over the past 20 years was the decision by the political Center to abandon the Left, instead choosing the radical Right, all in exchange for the crumbs it is able to scavenge from inside the government. Herzog could have continued to serve as a democrat from the back benches in the opposition. But one must climb over the Arabs in order to get into the seats of power in Israel — and Herzog understands that, too.

A version of this article was first published on +972’s Hebrew-language sister site, Local Call. Read it here.