The Israeli Defense Ministry canceled all permits for Palestinian peace activists from the West Bank to attend a joint ceremony on the eve of Memorial Day. 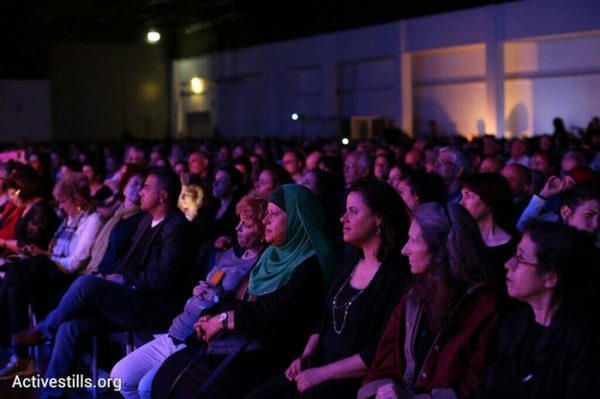 For the first time in the 12 years since its founding, Sunday’s joint Israeli-Palestinian Memorial Day ceremony will take place in Tel Aviv without Palestinian peace activists.

In previous years the Israeli Ministry of Defense has allowed tens and even hundreds of Palestinians into Israel so they can attend the event; on this occasion, however, every single permit was canceled. The Defense Ministry claims its decision was in response to the stabbing attack that took place in Tel Aviv two weeks ago, carried out by a Palestinian who had used a permit to cross from the West Bank into Israel.

Various legal petitions to get the decision overturned failed, and the organizers decided to hold a parallel event for Palestinian activists in Beit Jala, next to Bethlehem. Hundreds were expected to participate, including dozens of Israeli activists.

The ceremony is a joint initiative of the Parents Circle Families Forum and Combatants for Peace. In a press statement responding to the Defense Ministry’s decision, Combatants for Peace said: “Separation, intimidation and the heated and violent public discourse push away the hand that is outstretched in peace to the other side.”

The Parents Circle Families Forum added that the decision is “another assault on bereaved families and parents, who have paid the most painful price of all for the conflict. The defense minister’s decision…demonstrates the state’s unwillingness to listen to or even recognize the suffering of the other side.

“Our Palestinian partners are trying to instill a message of hope into a society consumed by despair,” the statement added.

This year’s ceremony was also threatened by activists on the extreme Right, who bombarded the organizers with thousands of hateful messages and death threats. On Sunday morning, the organizers submitted a complaint to the police, and the ceremony is being held under the protection of police and private security guards.

The ceremony will feature speeches from bereaved family members — both Israeli and Palestinian — including Roni Hirshenson, who lost one son in a suicide bombing and another to suicide; Meital Ofer, whose father was killed in a terror attack; Siam Nuwara Abu Nadim, whose son was shot dead by a Border Police officer; and Marian Saada, whose 12-year-old sister was killed after Israeli soldiers opened fire on the shared taxi she was riding in.

The joint ceremony’s stated aim is to try and get Israelis and Palestinians to recognize one another’s pain, and to propose partnership and peace as alternatives to occupation, war and killing. Three years ago, a colleague referred to the ceremony as simply “normalization by way of memorialization.” My response today is the same as it was then: that even in light of the difference between occupier and occupied, it’s precisely in death and remembrance that we can speak of equality.