Palestinian youth respond to a play based on testimonies by Israeli soldiers, which portrays the brutality of the occupation from the point of view of the occupiers.

The video above is a production called “It’s What We Do: A Play About the Occupation.” Although it is a drama, the soldiers’ reflections in the play are taken verbatim from actual testimonies of soldiers from Breaking the Silence, whose vivid memories continue to haunt them.

The play’s target audience was Jewish Americans, but several Palestinians from Gaza, ‘We Are Not Numbers’ writers who have themselves been the “targets” of Israeli soldiers, watched the video of the production. They were curious to see how far the the soldiers were willing to go in their confessions. It was difficult for many of them to watch, and their reactions varied. But they all agreed the video should be required viewing for Jewish people everywhere

These young Palestinians, whose reactions are reproduced below, are “an audience I never in my wildest dreams imagined for my production,” said director and producer Pamela Nice, a member of Jewish Voice for Peace. “If these young Gazans, who know first-hand how occupation feels, are willing to listen to and attempt to understand how Israeli soldiers think and feel about their roles as occupiers, shouldn’t each of us give these soldiers a hearing? And be open to other points of view? As one of them says: ‘This oppression is destructive to everyone.’”

As I watched “It’s What We Do: A Play About the Occupation,” many questions sprang to my mind: does confessing commission of crimes against Palestinians make Israeli soldiers noble people? Or does knowing that these men and women have belatedly felt some remorse make the experience less painful for Palestinians?

As a Palestinian living in Gaza, one whose brother and four best friends were killed in the last Israeli war on my home, I have to admit that watching this play didn’t make me feel better. It made me feel sick — sick that this is what it takes to prove our suffering is real to the outside world.

The play shows in a very real way what life under occupation is like for Palestinians living in Gaza, the West Bank and Jerusalem. The actors, and the soldiers whose testimony they share, speak bravely and honestly about the acts of cruelty — both intentional and mindless — we endure daily in Palestine, from the destruction of ancient olive trees and midnight home raids in the West Bank to tank invasions and drone surveillance in the Strip. 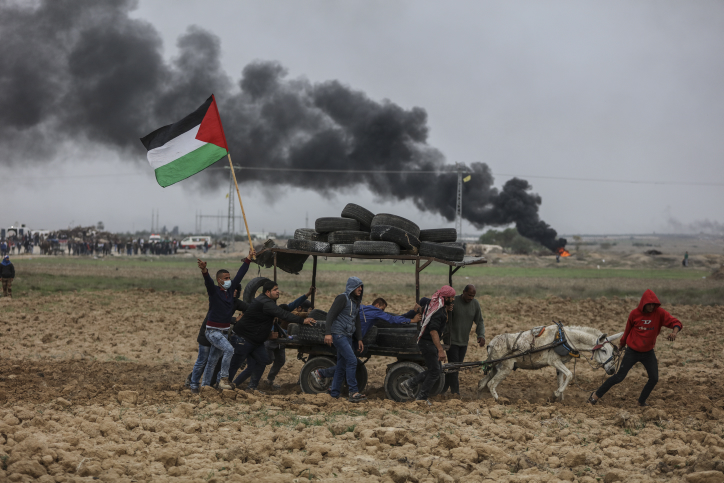 I appreciated the acts of the soldiers who confessed their crimes they committed against the Palestinians; I am aware of the bravery this required and the backlash they probably experienced. I believe their confessions are a step toward a just peace. But at the same time, they are so few and they repented only after they had done their deeds. How long will it take, how much more do we have to suffer, before young Israelis like these refuse in large numbers to kill and humiliate us? How many more homes must be demolished and how many more loved ones do we need to lose until they think twice before committing these crimes?

Meanwhile, as these atrocities continue, U.S. President Trump wants us to obediently return to the so-called peace process, with the suggestion that if we just stop trying to bite the hands of our oppressors, the butchers might one day see us as equally human. I am sorry to say this, but confessing to the crimes after they are committed isn’t enough. It doesn’t give the villagers back their land and farms. It doesn’t restore the innocence to children who watched their homes ransacked in the middle of the night. And it doesn’t bring my brother — who would have celebrated his 27th birthday this month — back from death.

While I am sure the viewers of this play feel sorry for us Palestinians, we don’t want to be pitied. We want to finally live like them. We want to be free! I want to know what  viewers (and the soldiers who now regret their actions) are doing to help make this happen.

When I read the title of the play, “It’s What We Do,” for the first time, I thought the video would show a series of savage, Zionist acts against Palestinians. However, it is much more than that. Those acts are exposed, yes, but they are challenged. The play answers several questions that have plagued my mind, like, “If Israelis are humans like us, how can they ‘do what they do’?” “What are their motives?” “What do they feel during and after these acts?” “Do they feel regret or just brag about it?” “Do they really want peace?”

The title fits the play so much. I see now that behind every obstacle they throw in the way of Palestinians, there is indeed a strategy, and that every refusal of a building permit and every delay in issuing a lifesaving document is hellishly intended. 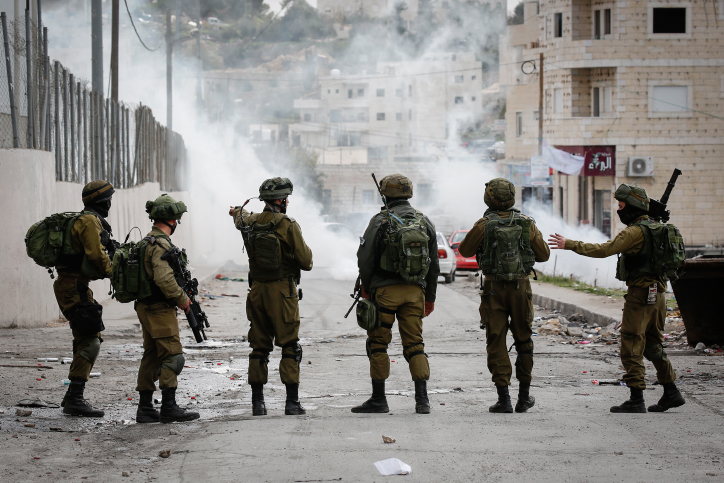 The director of the play is clearly striving to not only educate a Western audience but also to appeal to the humanity inside even every Zionist soldier, urging him or her to think again of “what they do.” The end of the play is really significant, in my mind. When confronted with the question, “What will you do now [with this knowledge of what is being committed], two of the soldiers walk away — from their former life, I think. The third one hesitates and is surrounded by the Palestinians he had oppressed. This reflects my belief that everyone will be rewarded or punished sooner or later. Oppressors should think again about which side of history they want to be on.

I’m really thankful to all of those who exerted efforts to produce this masterpiece!

By the end of the play, I felt crushed and devastated. Tears rolled down my face, because it is so very real. My fellow Palestinians are humiliated in every aspect of their lives, and why? Because we are Palestinians. But to Israeli soldiers and settlers, we are “worms,” and miserable ones too.

Daily harassment and humiliation of Palestinians is the duty of the so-called Israeli “Defense” Forces, not to mention the settler gangsters. And no one is held accountable. It is excusable for them to do what they want, and when Palestinians retaliate with any form of resistance, we are dubbed “terrorists.” 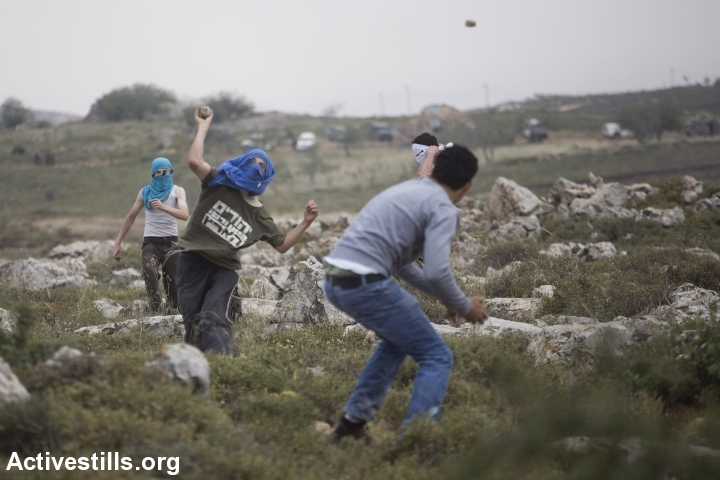 Israeli settlers and Palestinian demonstrators throw stones at each other, near the West Bank settlement of Ofra, May 3, 2013. (photo: Oren Ziv/Activestills.org)

But I believe that exposing these soldiers’ actions through creative means such as this play will steadily build up a momentum that will lead to change. It seems like a small step in the face of such impunity. But my hope is that once the silence is broken, there will be no turning back.

This play was painful to watch, because it so reflects my life. But I send very heartfelt thanks to Pam Nice, who exposed the truth using the art of theater. By watching this play, you will come to know that there is no real security reason for the wall and all of Israel’s checkpoints that divide Palestinians from their land and each other — just an intent to intimidate, control, pacify and obstruct Palestinians from earning a living in their own land.

You also will see that a major obstacle to peace is the policy that allows Israeli soldiers to harass Palestinians without restraint — whether it be by ransacking or demolishing their homes or shooting them point-blank. But you also see that this oppression is destructive for everyone: Palestinian civilians obviously suffer daily, and the Israeli soldiers — who are told “your mission is to disrupt lives”— are forced to stop thinking and do what they are ordered to do, even when the must carry out actions that are inhumane. This is called “mind occupation,” and I’m glad that some soldiers have managed to free their minds and break the silence.

You will notice there is no real conclusion; that’s because the disruption is still going on. We don’t know the ending.

Pam is a freelance writer and social-justice activist based in Washington, DC, who lived and worked in the Gaza Strip immediately following the 2008/9 Israeli assault. She also traveled to Yemen and Pakistan to interview people impacted by imperialist drone surveillance and warfare. Her writings can be found on sites such as Truthout, Alternet, Mondoweiss, Middle East Eye and Al Jazeera. This post first appeared at WeAreNotNumbers.org. Read it here.