More than one quarter of Jerusalem’s Palestinian residents live behind the concrete separation barrier; Israel has revoked the residency of over 14,000 Palestinian Jerusalemites since ‘reunifying’ the city in 1967, including 107 last year alone. 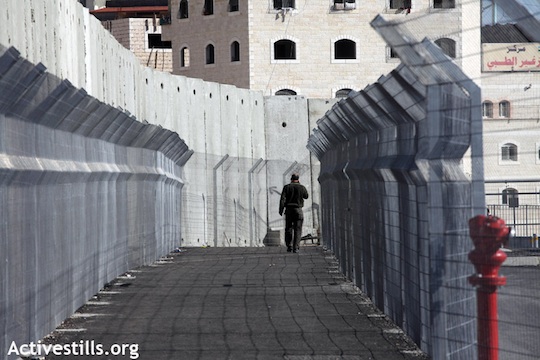 A Palestinian man walks toward the checkpoint at the entrance of Shuafat Refugee Camp in East Jerusalem, December 27, 2011. The camp is inside Jerusalem’s municipal borders and its residents are considered residents of the city. (Anne Paq/Activestills.org)

Three-quarters of East Jerusalem’s 300,200 Palestinian residents live below the poverty line, including 83.9 percent of children, according to a new report published by the Association for Civil Rights in Israel (ACRI).The state of affairs is attributed, in large part, to a lack of investment by the state as well as the fact that more than 25 percent of Jerusalem’s Palestinian residents live on the other side of the separation barrier.

The report was released in the run-up to Jerusalem Day, an annual celebration of what Jewish Israelis view as the reunification of Jerusalem, which occurred when the Old City was captured by Israeli forces on June 7, 1967. This reunification — or annexation — was illegal under international law, and Israel’s sovereignty over East Jerusalem is not recognized by a single member of the international community. Nonetheless, Israel refers to Jerusalem as its “undivided capital.”

The capital, however, is very much divided — not only along ethnic and (consequently) socioeconomic lines, but also physically divided by the separation barrier.

Since 1967, approximately 26,300 dunams of land have been expropriated by Israel in order to build government offices and Jewish residential neighborhoods, according to ACRI. Israel has revoked the permanent resident status of — effectively exiling — 14,416 East Jerusalem Palestinians since 1967. Last year, Israeli authorities revoked the residency of 107 Palestinians, including 12 minors. Between 2011-14, authorities demolished 302 structures in East Jerusalem, 98 in 2014 alone. As a result, 208 residents were displaced from their homes. The rate of such incidents has increased since the return of punitive home demolitions last year. 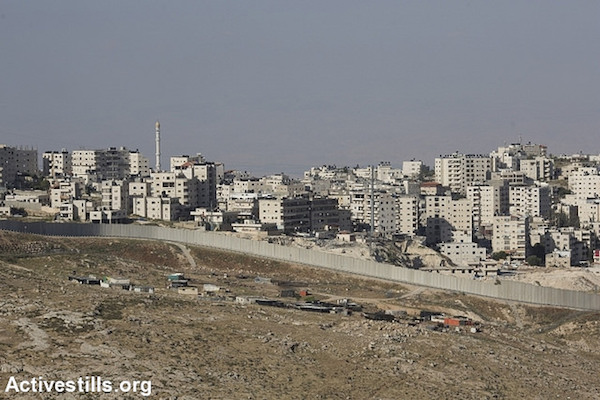 The neighborhoods on the other side of the wall — Ras Khamis, Ras Shehada, Dahiyat A-Salam and Shuafat refugee camp — are worst-hit by the uneven provision of municipal services and basic utilities. A water crisis hit all four neighborhoods for much of last year, and residents of Shuafat Refugee Camp suffer from an almost total lack of services from the Jerusalem Municipality and the Israel Police.

Nigerian-American writer Teju Cole has termed the measures employed against Jerusalem’s Palestinian residents as “cold violence … slow violence.” The continual encroachment, dispossession and outright expulsion of East Jerusalem Palestinians — at the hands of both state actors and settler groups — give weight to the impression that the Nakba is an ongoing process; the situation in East Jerusalem, then, is in part a cold and slow catastrophe.

Infographic: East Jerusalem by the numbers

Of course there is also “hot” violence to match the structural violence imposed the legal system. Israeli police arrested over 1,180 Palestinians, including more than 400 minors in the second half of 2014 during protests and clashes, according to the report. Only 338 of them have been indicted. The introduction and use of of black “sponge-tipped” bullets (which are actually made out of a heavy, synthetic rubber compound) by Israeli police has led to the death of one Palestinian teenager and at least five Palestinian children have lost sight in one eye from these. The projectiles have also fractured arms, jaws and ruptured one person’s spleen. Police have targeted journalists with the weapons, including an Activestills photographer.

The civil rights group notes that authorities have used collective punishment over the past year, including road closures, the use of putrid “skunk” water cannons in residential neighborhoods and against schools, and the harassment of Palestinian residents on “blacklists” with increased enforcement for minor municipal code and tax violations.

There is at least one piece of good news — plans to construct what will be one of the first official residential projects for Palestinian residents, the Arab a-Sawahra neighborhood. Local and regional planning and building committees approved plans for development a 1,500-dunam (370-acre) area for the neighborhood — the largest such plan approved in East Jerusalem.

As Israeli Jews celebrate the “liberation” of Jerusalem, it is worth remembering how exclusionary that definition is. The annexation of East Jerusalem has engendered inequality and repression — a situation that is only deteriorating. This is on public display in Jerusalem Day festivities, which consistently descend into racist violence, above all during the “March of the Flags.”

This parade, which winds through the Muslim Quarter of the Old City, forces Palestinians to shutter their shops and hide in their homes. A petition filed by two Jerusalem NGOs to change the route of the march was unsuccessful, although the High Court emphasized in its decision that the police must act against expressions of racism.

The history of Jerusalem is, in many ways, a microcosm of the history of Israel-Palestine, and the fate of the city will likely determine that of the land and its peoples. With Israelis increasingly examining their history, and as the flags fly past those shuttered Palestinian homes in the Old City on Sunday, we must reflect on which side of history we currently stand.