GAZA CITY — At around sunset, the main road along Gaza’s seaside promenade, the Corniche, grows crowded with people, cars, and street vendors. Families sit on plastic chairs from home, children run and play, and young men gather to share and cast away their worries. And there are the vendors, trying to make ends meet.

This is where people go to escape.

It is summer, and the people of Gaza are fleeing the heat and the darkness of their houses, otherwise inescapable due to the dire electricity crisis. On the beach they can find light and fresh air, a temporary refuge from life under an ever-tightening siege and the dire economic situation it has created.

For the past 12 years, the people of Gaza have had nowhere to relax except the sea. Yet even that has been taken from them. Due to the electricity crisis, untreated sewage and waste water is pumped directly into the sea, causing pollution that affects 75 percent of Gaza’s coastal waters. Palestinian environmental and health authorities have warned residents against entering the water in all of three specific locations. A five-year-old boy died last year after swimming in the Gaza sea.

Shelter for the unemployed 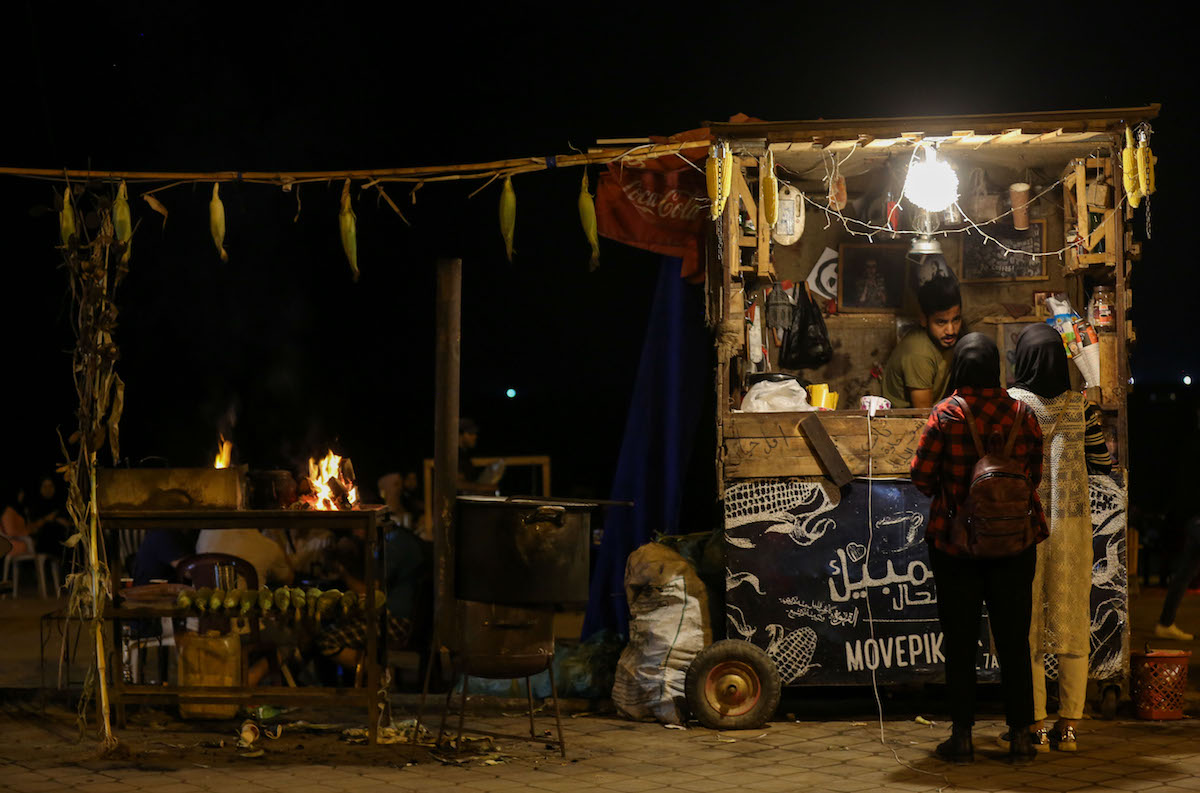 Every evening at 7 p.m., Mohamed al-Tanani walks from his house in Al-Shati refugee camp to the Sheikh Ijleen neighborhood in western Gaza City, where many of the city’s restaurants and cafes are located. Instead of heading to a cafe, he sits on a sidewalk near the street vendors who sell food and drinks at affordable prices.

Al-Tanani, 25, graduated with a degree in business administration in 2015, yet has since been unable to find a job. In fact, he is one of the quarter million young people in the Gaza Strip who are unemployed. According to a recent report published by the Palestinian Central Bureau of Statistics, 255,000 people in Gaza are unemployed — an unemployment rate of 49 percent.

“We in Gaza have no life. I have almost lost hope,” al-Tanani says. “My day starts at night when I am by the sea, where I let my thoughts and cares drift away. I go there to feel some light that we do not have at home. I drink coffee or tea and smoke shisha, and at midnight I go back home. In the morning, I look online for any job opportunities, but it is all in vain.”

Al-Tanani’s father, a civil servant, recently had his salary cut by 50 percent following a series of sanctions imposed by the Palestinian Authority against the Hamas government in Gaza. He and four of his friends, also civil servants, are anxious over their current situation and their gloomy future. They, too, gather at night to try and forget their burdens.

Ismael Radi, 28, holds a master’s degree in psychology. He has only been employed once, for a period of six months, since graduating last year. Radi, whose family lives below the poverty line and has no source of income, tried to leave Gaza two months ago but could not because he didn’t have enough money. He also spends his evenings at the promenade, where he tries to forget what weighs him down during the day.

“I am like many youths in Gaza,” Radi says. “It has become very normal to see people with master’s degrees unemployed. We are alive on the outside but our souls are dead. We bring our worries to the sea at night.” 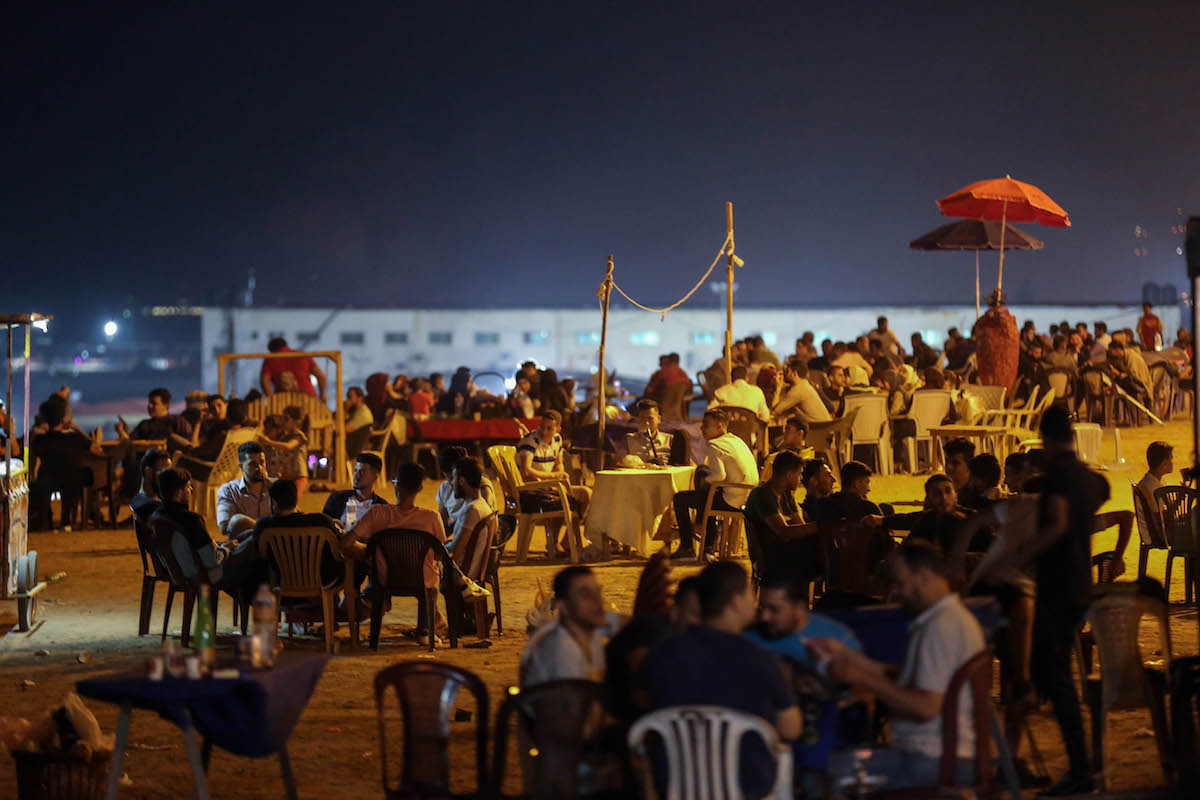 Gazan families sit along the beach in Gaza City. For many, the sea is a momentary escape from their dire economic condition (Mohamed Al Hajjar)

Moemen Hijazi is a 46-year-old father of five from Jabalia refugee camp in northern Gaza. He spends his evenings at the beach where he manages to temporarily escape thinking about the debts that haunt him. He too, now only makes 50 percent of his original salary, and cannot bear to sit at home in the dark and watch his children’s idleness.

“I grew bored of listening to officials’ statements and hearing the air strikes. I see no hope in politics to improve our humanitarian condition. The sea and the night are our rest, we feel like being imprisoned,” he says.

Zahiya Al Qarra, a psychologist in the Gaza Mental Health Program, says that there has been an increase in the number of people seeking psychosocial support and counseling, adding that most men in Gaza suffer from self-alienation, where they lose hope and trust in their surroundings and in life, as they cannot meet any of their needs.

“The people of the Gaza Strip are like prisoners,” Zahiya says. “They no longer trust their leaders’ statements [promising] better conditions, they are depressed with no hope. We are losing this generation, which cannot live a decent life.

From the rich to the poor 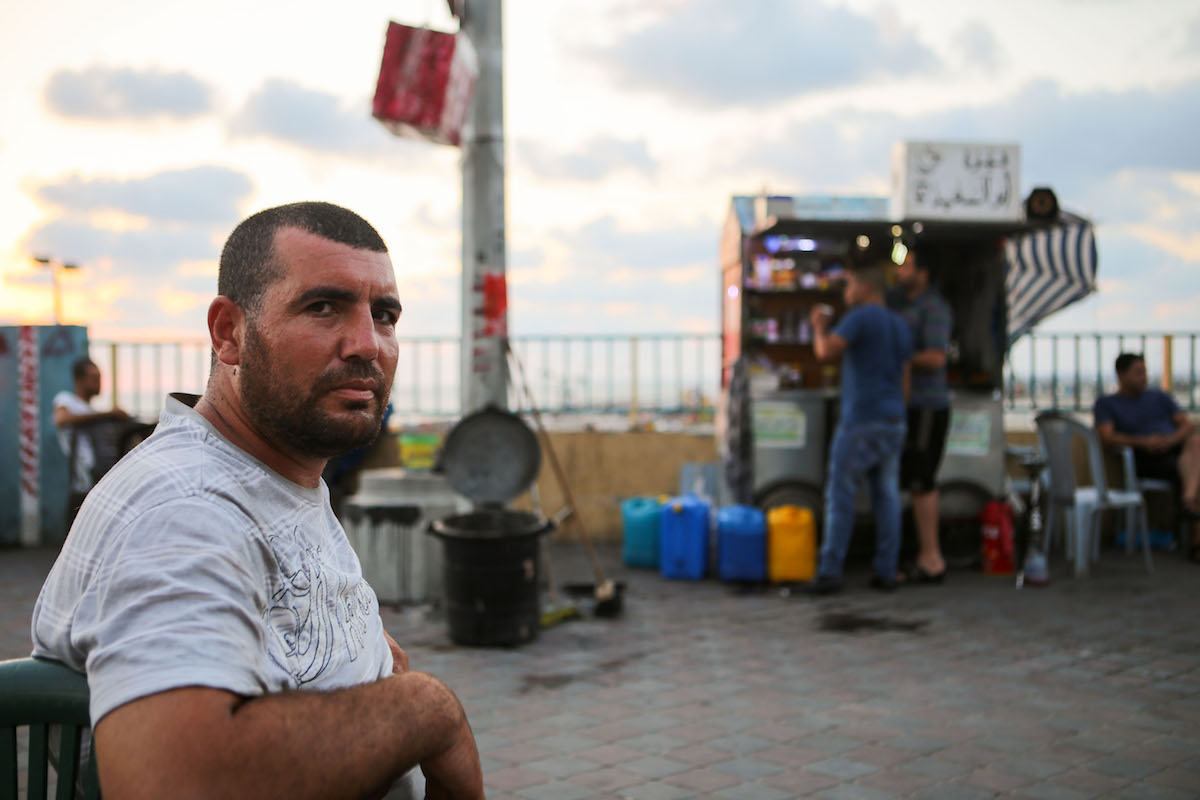 Ibrahim Massoud has spent much of the last 10 years as a street vendor, ever since he lost his job at a slaughterhouse. ‘Most street vendors ended up at the sea after they lost their jobs. The poor and rich in Gaza are turning to the beach to let out their concerns.’ (Mohamed Al Hajjar)

For the street vendors of Gaza, the sea has become their primary source of income, and each has his own way of attracting customers. In the past, street vendors were subject to taxes and restrictions by the police and municipality, but due to the economic and humanitarian situation, have largely stopped enforcing and collecting them.

Ibrahim Massoud, 31, plays classic Arabic songs by Umm Kulthum, Abdel Halim, and Abdel Wahab through speakers attached to his beverage cart. He and his wife divorced in 2015 after he was forced out of the slaughterhouse where he worked for 10 years and fell into dire straits. Ever since, he spends most his days with his cart.

He has built relationships with his customers, some of whom have become family to him, visit him daily to check in, and talk with him about their everyday concerns and problems. He says his customers bring their worries from homes to throw them into the sea.

“Most street vendors ended up at the sea after they lost their jobs. The poor and rich in Gaza are turning to the beach to let out their concerns,” Massoud says.