A 24-year-old Palestinian and her teenage brother were shot and killed by Israeli troops after allegedly trying to stab Border Police officers. The police’s version of the events doesn’t add up, but nobody in Israel, including the media, feels the need to ask questions. 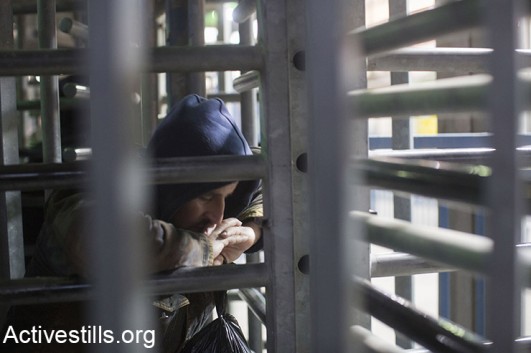 The facts are still unclear, in fact very unclear: the exact number of knives found, the number of bullets shot, the number of meters distance, why exactly they were there. But even if we accept Israel Police’s highly terse account of the events, we are still left with a bottom line: Two Palestinians, Maram Salih Hassan Abu Ismail, 24, and her younger brother Ibrahim Salah Taha, 16, were shot and killed on the spot by Israeli forces at the Qalandiya checkpoint on Wednesday, while posing no immediate threat to anyone. Even if we accept the police version that the woman attempted to stab them, there is still no justification for shooting the teenager, who the police themselves claim was not brandishing a weapon or close enough to present a threat.

We also know that Israeli mainstream media barely covered the story, didn’t send any reporters to gather eyewitness testimonies and didn’t speak to any Palestinians. A Haaretz report mentions that Palestinians claim that “Israeli forces fired numerous bullets at the two and prevented medics from treating them.” Of course, whether and when medics were able to treat the victims shouldn’t be a matter of Palestinian claims. There are plenty of cameras at what is the busiest checkpoint in the West Bank, there is video footage, probably from several angles. The footage should clarify this, and other aspects that are not a matter of opinion. But Israel Police has not yet released any footage. According to a report in Local Call, police have in the past been quick to release video footage – when it corroborates their version of the events.

According to Israel Police spokesperson Luba al-Samri, two suspects – a woman and a youth – approached the vehicular path (instead of the pedestrian path) leading through the military checkpoint and walked towards Border Police officers stationed there, the woman with her hand in her bag and the youth with his hands behind his back. Officers ordered them to halt several times and they began to turn back before the woman threw a knife at an officer. Police and security guards then shot the two, killing them both. The police didn’t specify this but most reports cite that the siblings were 20 meters away from the forces, and they were positioned inside a cement sentry box.

These events didn’t even make it into the evening news in Israel Wednesday night. Except for Joint List MK Dov Khenin, no Israeli politician has expressed dismay or called on the police to release the footage or open an investigation. There hasn’t been any questioning of what the hell happened there. Rather, there has been deafening silence. It’s almost as if it didn’t happen.

There have been numerous similar incidents over the last half a year where Israel has justified the shooting of Palestinian assailants or alleged assailants and Palestinians have insisted it was murder in cold blood.

But this incident, whose factual information still needs to be exposed and reported, strikes me as unique due particularly to the way it was (not) covered in Israeli media and the fact that it was such a brief story that just disappeared.

It’s no surprise that most Israelis generally take the authorities’ version of events at face value, but this time the version of the events isn’t even convincing. And yet no one feels the need to ask questions. No one cares that a 16-year-old kid was shot dead without cause. In the Israeli narrative, the facts don’t seem to make a difference anymore (maybe they never did).

As the incident of IDF soldier Elor Azaria executing Abdel Fattah al-Sharif in Hebron demonstrated, even when there is clear documentation of a crime – in that case an execution in broad daylight – there is still a groundswell of Israeli support for the army and state authorities that finds a way around the facts. As Orly Noy pointed out at the time

The number of people who are willing to justify the murder without batting an eyelash is stunning. Our collective moral compass has become so fundamentally twisted that even the most decent of people, those who are not considered extremists, believe that there is nothing wrong with shooting a man as he lies dying on the ground, while finding any way to excuse the act — including claiming that the Palestinian may have been armed with a suicide belt.

In that case, the facts were played around with a little to justify the soldier’s actions, but in the case in Qalandiya on Wednesday, there doesn’t even seem to be a bending of the facts. There is no need to try and justify anything. It doesn’t even matter anymore what exactly happened. In the permanent situation of occupier and occupied, oppressor and resistant, it’s just par for the course.