A Palestinian hit-and-run suspect is sent to prison and winds up dead; a Jewish suspected of a similar but deadlier crime in the West Bank is sent home to his family. 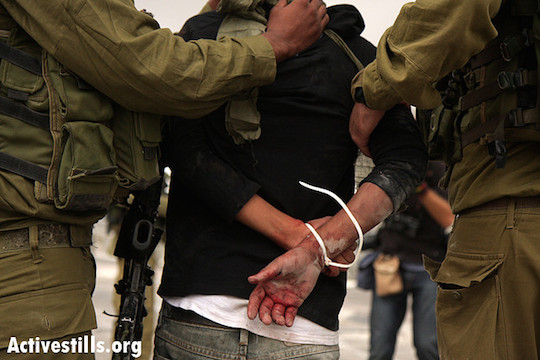 Three months ago, on July 25, Raed al Jabari, a 35-year-old a father of five, was driving on Route 60 through the West Bank. He apparently fell asleep at the wheel (having earlier taken painkillers). Near the Gush Etzion Junction he hit a woman standing on the road. The woman was slightly injured. Immediately afterwards, he veered sharply back onto the road and turned himself in to Israeli authorities. There he explained what is outlined above.

Al Jabari was arrested and taken to the Ofer military prison. He was brought to the military court within the complex, where in light of these facts, the military judge released him on NIS 8,000 bail ($2140), having decided that he was not dangerous and his action wasn’t a deliberate terrorist act. But those were the days of Operation Protective Edge, and under the cover of the fighting in Gaza, the IDF greatly intensified its repressive actions in the West Bank. Without any additional evidence, the Military Advocate-General decided not to release him and Al Jabari became a “security prisoner.”

On September 9, Jabari was transferred to the Eshel Prison in Beersheba — inside the Green Line Israel — in flagrant violation of international law, which prohibits the transfer of prisoners outside of occupied territory. According to eyewitness accounts, he refused to get out of the vehicle, but was beaten and eventually got out. A few hours later the Israeli Prison Service (IPS) announced he had been found hanged in his cell. His family wasn’t informed of the death. Only after the case was reported in the media and rumors began to reach the family did they contacted the IPS, which at first claimed it knew nothing of the matter, and then confirmed the details. Israeli news site Walla! News reported at the time: “the prisoner who committed suicide, a 37-year-old Palestinian from Hebron, was arrested two months ago during Operation Brother’s Keeper on suspicion of security offenses.”

The findings of the Israeli autopsy have not been published to this date. The Palestinian doctor who was present has been compelled by the court to desist from publishing the results. He did, nevertheless, recommend an additional Palestinian autopsy. I have been unable to get a hold of even those results. However, following the autopsy, Palestinian minister for prisoners claimed that there were no signs of hanging on the body, but that there were signs of violence.

I don’t know which of the accounts is the true one, and for our purposes it does not matter. Either way this is an IPS failure, which followed the military legal regime’s criminal abuse of a person whose only crime, it is reasonable to assume, was of a minor traffic accident, and whose death would be whitewashed using the usual means.

Yesterday, Sunday afternoon, on the same West Bank road near the village of Sinjil, a Jewish Israeli from the settlement of Yitzhar ran over and killed five-year-old Palestinian Inas Shawkat Dar Khalil, also critically injuring four-year-old Omar Asfour. He fled the scene and didn’t summon help. When he arrived at the major settlement of Ofra, he called the police. They sent him home to his family.

The settler — responsible for the death of a child and the critical injuries of another — wasn’t arrested, he was not taken to a military prison, he wasn’t tried without evidence, he wasn’t beaten up, he wasn’t taken away from his family, and he didn’t become a security prisoner.

A Palestinian under similar circumstances who only lightly injured an Israeli woman, had to endure all of that, and died because of it.

Correction:
A previous version of this article mistakenly stated that al Jabari struck the Israeli woman with his car on July 26, when in fact the events took place on July 25, 2014. We regret the error.

John Brown is the pseudonym of an Israeli academic and blogger. Translated from Hebrew by Sol Salbe of the Middle East News Service, Melbourne Australia.