If Israel was able to inflict fatalities in 2000 just as it did in Kafr Qasim in 1956, with no accountability to the victims and affected families, how can Arabs feel safe about their rights as citizens? 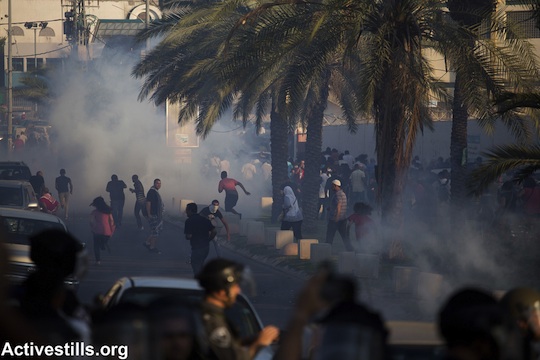 Israeli police fire tear gas toward and forcefully disperse demonstrators during a protest against the Israeli government’s Prawer-Begin Plan, on road 65 near the northern town of Ar’ara. (Photo: Activestills.org)

This week, Palestinian citizens of Israel marked the 57th anniversary of the Kafr Qasim massacre, when an Israeli paramilitary unit shot dead 49 Arabs (almost half of whom were children) as they returned from their farms, unaware of the new military curfew that had been imposed on their village. The perpetrators served meager jail sentences, with several officers promoted upon their return to the security forces.

Although there has never been an incident as grave as the 1956 massacre, the legacies of Kafr Qasim are far from being a distant memory for the Palestinian community in Israel. This past month, Palestinians also marked the 13th anniversary of the October 2000 killings, when Israeli police shot 13 Palestinian citizens during protests against escalating military violence in the Occupied Territories. Despite years of vigorous advocacy and a landmark government commission issuing extensive recommendations, not a single police officer was brought to court. One of the killers even got a promotion in the security forces several years later.

The October 2000 events, and many other episodes before that, are shocking echoes of the violence and absence of accountability that were seen in 1956. Though Palestinians citizens are no longer under military rule, the mechanisms that allowed those two incidents to occur remain the same. The state continues to believe that Arab citizens remain a collective danger to the state, that Arabs who protest in the Israeli public sphere are a threat, and that Arabs must be kept in their place – as a marginalized fragment of Israeli society.

This mentality is consistently seen in the state’s responses to countless exercises of Arab rights. In the months after the Kafr Qasim massacre in 1956, Palestinians across Israel held large demonstrations in anger at the brutal deaths and in protest of the discriminatory policies that were growing in the nascent Israeli state. My grandfather, who lived in Tira at the time, told me how he watched the town’s demonstration from the roof of his home: as the peaceful marchers approached the military roadblocks, police opened fire at the crowds to disperse the protest. Other villages faced the same response.

Fifty-seven years later, in 2013, I watched as Israeli police violently broke up Arab demonstrations against the Prawer Plan with clubs, tear gas and stun grenades and arbitrarily arrested dozens of Palestinian participants. The police gave them only one hour to protest and argued that the demonstrators were trying to block major junctions. What they did not explain was why a social justice protest organized by Jewish citizens in Tel Aviv that same week, which blocked the Ayalon highway, was allowed to continue late into the night without hindrance.

The differences in the state’s treatment of Jews and Arabs are widespread and well known, but there are still many Israelis who do not comprehend the impact of this pervasive and historic discrimination. By allowing these forms of mistreatment to continue, Palestinian citizens are being told to accept their inferior status: that we are not allowed to enter the public sphere, that we should fear for our freedom of expression, and that we will not find justice for any actions taken against us. While many Palestinians overcome those threats and assert their presence nonetheless, many more remain fearful of the unpredictable consequences. If the state can inflict fatalities in 2000 just as it did in 1956, with no accountability to the victims and families it is affecting, how can Arabs feel safe about their rights as citizens?

These fears continue to exist as Israel enacts more discriminatory laws, attacks minority civil and political rights and implements policies like the Prawer Plan that further entrench Arabs’ status as second-class citizens. None of these even begin to mention Israel’s actions in the Occupied Territories, where Palestinian life is repressed by direct and structural violence on a daily basis. Regardless of whether they are on this side of the Green Line or the other, Israel’s goal of restricting the space and freedoms of Palestinians is enforced by the racist belief that non-Jews are an inherent problem to its survival. Remembering Kafr Qasim is therefore not just a commemoration of the lives lost in 1956, but a reminder that the attitudes that permitted such events to occur have not changed.

Amjad Iraqi works at Adalah – The Legal Center for Arab Minority Rights in Israel. The views in this article are the author’s alone and do not represent the views of Adalah. The author thanks Fady Khoury for his assistance.