Avi Benayahu, who served as IDF Spokesperson during both Operation Cast Lead and the Mavi Marmara incident, explains his worldview and tactics in a lecture obtained by +972 Magazine, including how he sent army officers pretending to be civilians onto foreign television news. 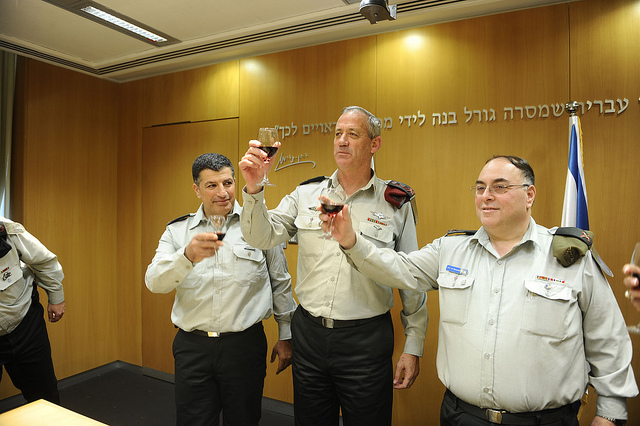 Until Brigadier-General (ret.) Avi Benayahu was appointed to be the IDF Spokesperson in 2007, the unit did little more than send Israeli newspapers photos of soldiers celebrating Passover. But between 2007 and 2011, Benayahu — then-Chief of Staff Gabi Ashkenazi’s right-hand — revolutionized the antiquated unit, transforming it into one of Israel’s leading “hasbara” (propaganda, or “public diplomacy”) outfits. The unit’s methods and aims still rely heavily on his work.

Benayahu, a self-described technophobe, opened a “new media” division, which included an active, multilingual presence on YouTube, Facebook, Twitter and Instagram. The project did so well that he was asked to lead another new media initiative after his term ended. During his time as spokesperson, Benayahu led the army’s public relations effort surrounding Operation Cast Lead in 2008-2009, as well as the 2010 Mavi Marmara incident. In 2011 he was elected “Media Man of the Year” by the Israel Public Relations Association.

But Benayahu was not only known for his initiative. He became notorious for his aggressive approach toward the media and journalists, especially those of whom he wasn’t fond and with whom he didn’t work closely. For example, he didn’t hesitate to order IDF soldiers to confiscate equipment and work product from journalists, only to release bits and pieces of their reportage when it served senior officers.

It was Benayahu’s relationship with Ashkenazi and his inner circle that led to the spokesperson’s fall from grace. From 2011 on, his name was associated with the “Harpaz Affair,” over which leading IDF officers were interrogated about attempts to discredit then-Defense Minister Ehud Barak and his nominee to become the next chief of staff. Benayahu was even arrested at one point.

Today Benayahu works as a private consultant. His public image has yet to recover from the Harpaz Affair, but in the current climate, his methods and ideas are more mainstream than ever. In a country that has given up on diplomacy and long-term policy thinking, Benayahu represents the only viable alternative: a combination of military power and propaganda. “I don’t like when we apologize during war,” he recently said. And nowadays, Israel sees itself as a country that is always at war.

Benayahu gave a lecture at Tel Aviv University recently about his experience as IDF Spokesperson. Benayahu explained how he would use Israeli envoys and Jewish institutions to promote his military talking points, he discussed how he manipulated the international press, praised the local media for its discipline in wartime, and explained how he views the spokesperson’s unit’s role: “When I completed my posting in the General Staff [of the IDF], I came out with the knowledge that the IDF Spokesperson is a combat unit with more influence than two divisions.”

I obtained a recording of the lecture. Here are some of the interesting bits:

In Cast Lead we tried to restore order, we took cellphones from the all the soldiers and we didn’t let journalists go in or go out, all sorts of things like that. We wanted to redeem ourselves. I’ll say this as clearly as possible, okay? During Cast Lead, one of the my — and the army’s main missions — was to redeem ourselves from the bad feeling [that followed] from the Second Lebanon War.

The IDF Spokesperson’s central role, Benayahu told the students, is to preserve both local and international legitimacy for the IDF’s actions. The challenge is that the world expects the IDF to operate according to its own ethical code. The IDF, however, has long since changed its policy: now it prefers to kill uninvolved Palestinian civilians rather than put its own troops in harm’s way.

When it comes to hasbara you need to align your expectations with that of the public. […] the world says to us: ’The Bible is your book, the Jewish people’s morals are yours, the Declaration of Independence is yours, the IDF’s Code of Ethics, which you wrote. Everything you hang on the walls (The Declaration of Independence and the IDF’s Code of Ethics are displayed in every army classroom – N.S.) — we won’t tolerate a gap between what you wrote and what is happening on the ground.

Therefore, we need to change what’s on the wall. What is important today is to explain to the world that are our civilians come first, our soldiers come second, their civilians come third, and in fourth place are their terrorists.

Because the world has gotten confused. The world is used to a situation where some [people] die here in order to save some of them.

In the past, one or two or three Hamas battalion commanders would travel to a meeting with a Hamas division commander — they would put a woman on the left-side window and a young girl on the right-side window as they traveled, in order to guarantee their safety. You don’t open fire, right? Today, we fire. The woman and the kid – gone. That was the surprise of Cast Lead. 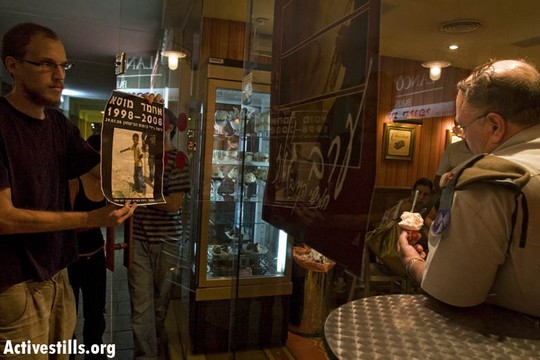 Benayahu explained how in order to increase the effectiveness of his messaging he would place military officers posing as civilian commentators for foreign media consumption, without ever letting the television networks know. A foreign audience, he said will receive messages by eloquent civilians far better than those delivered by a field officer with broken English:

A 58-year-old American man who comes home from work in Albuquerque or St. Louis, relaxes with a Budweiser and turns on the TV and sees that three kids were killed in the West Bank, and some colonel is trying to explain in basic English — that’s no good. Often times, that is what we had

As the IDF Spokesperson, I came with a lot more knowledge, experience and authority, because of my previous roles. I wasn’t afraid to make difficult, unpopular decisions. For example, I took former Ambassador Zalman Shoval, a who was a reserve officer in the First Lebanon War, a lieutenant-colonel in hasbara.

I took his uniform from him, a field uniform, and I told him ‘put this in the back of your car.’ I told him you’re going to do your reserve service in the Spokesperson’s Unit, but in civilian clothes on foreign television stations…

Some of the lesser-known IDF Spokesperson reservists appeared on American and European [television networks] without uniform. Without ranks of colonel or general — it’s not okay, it’s a little fraudulent because it is a general or a colonel — but in war one can do such things.

Another important initiative Benayahu implemented was using Israeli religious envoys to Chabad and Jewish community centers abroad to push the army’s talking points. This strategy is in line with the new approach in Israel, which views the diaspora and all of its institutions as a vehicle for promoting and lobbying for Israeli policies. Benayahu explicitly refers to organizations such as Hillel as agents of the army’s PR machine. In effect, diaspora Jews are asked to “participate in the war effort from home.” He even oversaw the development of software designed to make that more efficient.

The most influential front is [being fought] on social media. During Cast Lead I built a tool […] it was called “global distribution.” […] We mapped hundreds of organizations […] Israelis, Jewish and Christian [groups] that love Israel, church organizations, we did all this leg work.

And the system works like this: if I have a message from the IDF Spokesperson, a message that I am also publishing in Israel, and I translate it to English — a photo, video, map, or document, I pass those onward with a single click through “global distribution” […] to hundreds of headquarters on every continent.

For instance, let’s take one example, Chabad. [They have] thousands of emissaries — do you know what those are? The Chabad emissaries that you all know from from East Asia, but also in France, Manhattan, New York, Los Angeles…

With a single click, [the Chabad spokesperson can] transfer [the message] to thousands of locations. Now, there is discipline there. The guy in New York gets it and sends it to thousands of people on his mailing list, and the same thing in Kathmandu and China. I send it to Hillel, and Hillel sends it to every Hillel house in universities all over the world […] viral distribution. That defeats anything. We built this system, it works, the way we distribute our newsletter videos, pictures…

In every war, all the Jewish communities around the world identify with the IDF. They raise money and send us packages. They hold rallies in support of the army. [Now], for the first time in history, they can actually take part in the war from their homes. With the tip of their fingers, they can make an enormous contribution to Israel’s hasbara.

+972 Magazine contacted IDF Spokesperson with questions regarding the practice of placing army officers pretending to be being Israeli civilians on foreign television networks. The Spokesperson’s Office declined to comment.