A recent article in ‘The Washington Post’ praises efforts by the Israeli government to bring in cheap labor from Jordan as a sign of growing peace. The problem? It all comes at the expense of Palestinian workers. 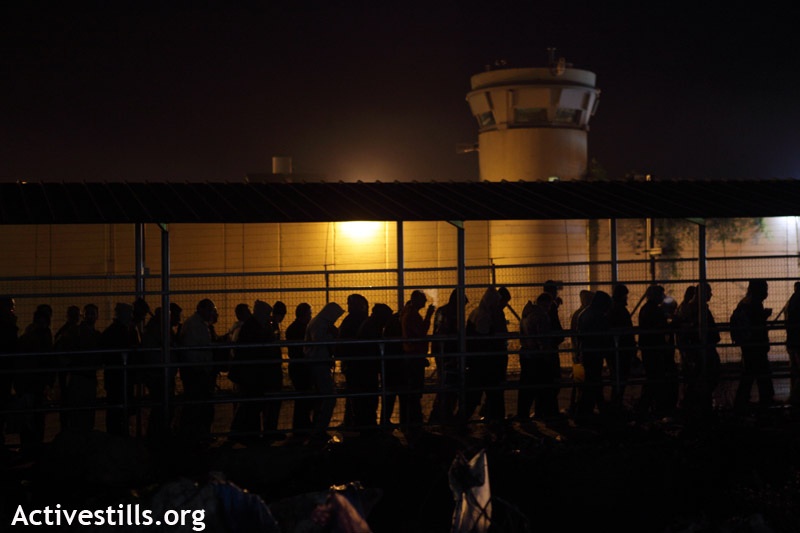 Palestinian laborers line up to cross into Israel via the Eyal military checkpoint, Qalqiliya, West Bank, 22.11.2011. Thousands of Palestinians pass this checkpoint every morning, some coming as early as 4 a.m. (Photo by: Anne Paq/Activestills.org)

A Washington Post article published earlier this week praised a new pilot project between the governments of Jordan and Israel as a “little peace” in the Middle East. To support the argument, the article applauded the fact that room cleaners named Ahmad and dishwashers named Mohammad are being brought in from Jordan to work in Israel’s southern city of Eilat.

Yet this vision of a new, peaceful Middle East is a non-story and far from being a sign of peace.

The truth is that the number of employees entering Israel from Jordan is relatively small. In fact, Jordanian laborers are necessary only as a result of Israel’s absolute ban on Palestinians entering Eilat. Around 115,200 West Bank Palestinians are employed in Israel, yet they are all banned from the country’s most southern city. While Israeli officials have refrained from providing an official explanation for the ban, it is widely assumed that it stems from Eilat’s distance from the West Bank, which prevents Palestinian day laborers from going home after a day of work. This, along with Israel’s crackdown on the asylum seeker community — asylum seekers partly replaced Palestinian workers in the years following the Second Intifada — has created a shortage in workers for Eilat’s hotels industry. That’s where the Jordanians come in.

When SodaStream, one of the BDS movement’s main targets in the past few years, moved its factory from the West Bank settlement of Mishor Adumim to the Negev desert, hundreds of Palestinian workers were left behind after not being granted permits to work in Israel. SodaStream CEO Daniel Birnbaum launched a national campaign following the decision, condemning both the BDS campaign as well as the Israeli government, which declined his request to issue permits to his long-time employees. In response the laid off employees launched a Facebook page called “The Peace Intifada” and took part in a heartfelt video where they gathered together to form a giant peace sign. The message was clear: SodaStream is a peaceful oasis in the heart of a violent conflict between Israel and the Palestinians. 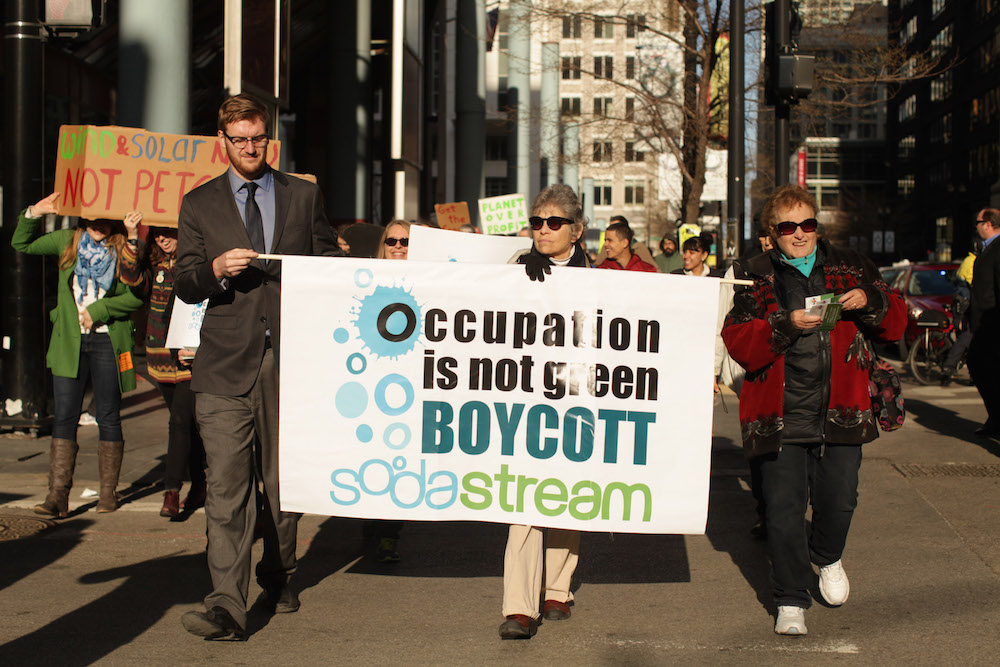 Members of the Chicago SodaStream Boycott Coalition take part of the Earth Day March in Down Town Chicago, IL on Tuesday, April 22, 2014. The rally was part of the international Earth Day held world wide in support for environmental protection. (Tess Scheflan/Activestills.org)

The case of SodaStream is interesting, since much like the Washington Post piece, it presented Palestinian employment as a symbol of peace between people. Yet while economic ties between countries may signal warming relations and coordination between governments, they are ultimately driven more by the demand for cheap and readily available labor than by actual political change. Moreover, the story of Jordanian workers in Eilat shows how Israel turns to Jordan only when the cheapest, most easily exploited labor force — Palestinians — is not available.

Like every developed country, Israel relies on migrants to do jobs that Israelis are no longer willing to do. That is why more than 600 factories in Israeli settlements rely on Palestinian workers; in 2014, Palestinians comprised 15.3 percent of all construction workers in Israel, where the daily wage is more than twice as high as the daily wage in the West Bank. Unemployment in the West Bank currently stands at 18.7 percent, while 11 percent of all working people in the West Bank are currently employed in Israel.

The situation in the West Bank is unique when compared to other countries that export workers, considering the fact that the territory is not a sovereign, independent country and that its economy is entirely captive to that of Israel as a result of the economic arrangements in the Oslo Accords. In order to work in Israel, Palestinians are subjected to a highly complex and nebulous bureaucratic system, sometimes referred to as the “permit regime.” Permits are only granted to Palestinians if the request comes from an Israeli employer. Given the security situation — along with other considerations that are not always disclosed — permits can be revoked overnight. According to Haaretz, hundreds of Palestinians have recently complained that they found, while on their way to work, their entry permits had been revoked without any prior notice.

In November the Israeli military imposed a closure on Hebron after a Palestinian worker from the area stabbed two people to death in an attack in Tel Aviv. The attack was followed by calls from Israeli politicians, including opposition leader Yitzhak Herzog, to freeze work permits of all West Bank Palestinians. However, then-Defense Minister Moshe Ya’alon was quick to dismiss their demands, arguing that a closure would only push Palestinians toward violence fueled by unemployment. This same approach has guided other heads of Israel’s defense establishment, who recently recommended the government approve an additional 30,000 entry permit for Palestinians. In fact, Ya’alon’s last political move before being ousted as defense minister was to declare a NIS 300 million plan to ease the pressure on checkpoints between Israel and the West Bank, in order to “expand the number of Palestinian workers” in Israel.

“Imposing a closure on the West Bank is a political action that allows the army to ease or make tougher the situation in the West Bank”, says Yael Berda, Israeli scholar and the author of The Bureaucracy of Occupation: The Permit Regime in the West Bank 2000–2006. “It’s another way to manage a conflict — to show both how bad and how good the army can be.”

The World Bank has time and again mentioned Israeli restrictions on movement as one of the main reasons for the dire situation of the Palestinian economy. According to the Palestinian Bureau for Statistics, wages of Palestinian workers in Israel make up approximately 13 percent of the West Bank’s GDP. A 2014 Bank of Israel report showed that a Palestinian worker is likely to earn NIS 198 a day for construction work in Israel, while earning only NIS 91 for a similar job in the West Bank. When unemployment in the West Bank decreased in the first quarter of 2015, the International Monetary Fund attributed it solely to the rising number of permits Israel grants West Bank Palestinians.

The Washington Post’s decision to publish an article that almost entirely ignores the context of foreign labor in Israel is problematic not only due to the gap in knowledge that it creates, but also, and perhaps more importantly, because it romanticizes importing one type of cheap labor over another. More than that, however, it romanticizes the balance of power in the Middle East, and Israel’s ability to use the current political situation, in no way a peaceful one, for its own economic benefit.

Hagar Shezaf is a journalist based in Jaffa.