Last week, the Israeli government approved a new plan to displace 30,000 native Bedouin Arabs of the Negev/Naqab from their homes.[1] “The Program for Regulating Bedouin Settlement in the Negev” is the biggest dispossession plan of Palestinians issued by Israel since 1948. It would forcibly relocate about half of the Bedouin population from their existing villages, which are older than the State of Israel itself, into existing small towns or townships, designated specifically for the Bedouins by the state. 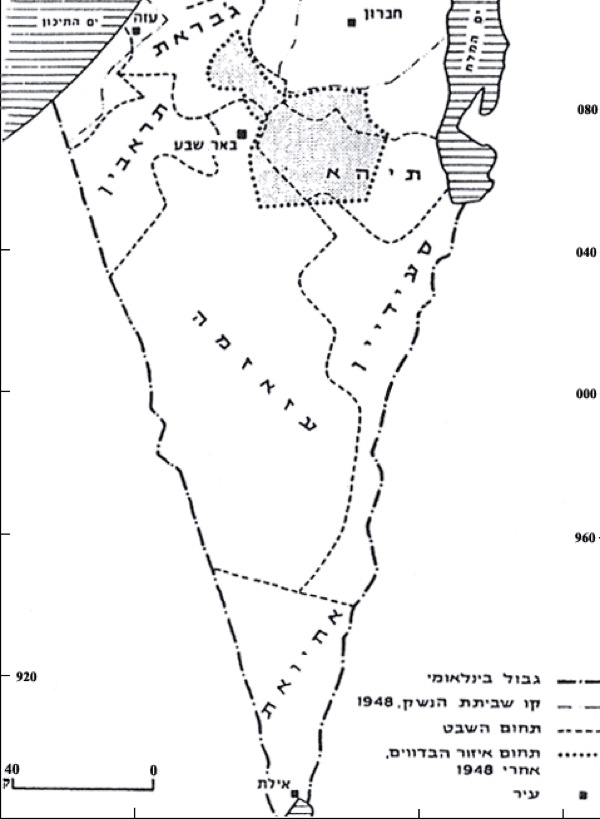 Map of Negev desert showing territorial divisions according to Bedouin clans in 1948.

Historically, there have been only two other Israeli plans of forced-migration of Palestinians on a mass scale since 1948: the banishment of refugees fleeing during the 1967 war, and the ongoing revocation of residency status and civic rights from native Palestinians of East Jerusalem.[2]

In the first case, about 300,000 Palestinians fled to Jordan during the 1967 war, after Israeli forces either drove them away, or less often, directly “transferred” them to the east bank of the Jordan river. Many of them thus became refugees for the second time: they had already lost their homes and lands in 1948, and were obliged to live in refugee camps in the West Bank until the 1967 war displaced them a second time. Like in 1948, the new refugees were not allowed to return to their property, most of their houses and villages were quickly demolished by the Israeli army,[3] and their lands were confiscated in violation of international law and treaties.

However, unlike in 1948 (and early 1950s), this time it was hard for Israeli security forces to claim the exodus had occurred voluntarily, “in the fog of war,” or “to allow the Israeli state to exist.” Following UN resolutions and an agreement with Jordan, Israel agreed to facilitate the return of the refugees, but due to the arbitrary conditions it later set, in practice only 40,000 were readmitted to the West Bank. Israel recently anchored their expulsion (together with that of 1948 refugees) in “The Law for Securing the Denial of [Palestinian] Right of Return 2001.”

The second mass-displacement is an ongoing effort to reduce the number of Palestinians holding “permanent residency” status in Jerusalem. This status was given by Israel to the Palestinian residents of what is often called “East Jerusalem,” a large territory annexed to Israel from the West Bank after the 1967 war.[4] However, permanent residency can be considered anything but a permanent status, as it is continuously revoked from Palestinians who cannot demonstrate that their “Center of Life” is in municipal Jerusalem – even if they still reside in Israel or the West Bank, or left for a few years to study or work and wish to return home. According to official Israeli numbers, more than 11,000 Palestinians have already lost their legal status since the confiscation policy started in 1995, a number which continues to grow. They in fact lose the right to stay in the country, their property is often confiscated, and their families often also consequently leave.

Unlike previous plans, the current plan for the displacement of the Bedouin will not deny its victims the right to stay in the country, but it will still confiscate their lands and demolish dozens of existing villages, in order to confine their residents to a smaller territory.[5]

Officially, Israel denies this is its purpose, insisting that the program aims to enforce law and order, and improve construction, planning and housing in the Negev desert in southern Israel.[6] But the mayor of the Regional Council of Ramat Ha-Negev recently disclosed the true essence of the ongoing efforts to evict residents from existing Bedouin villages. In the Israeli documentary “Blue ID Card” he admitted on camera [7] that the regional planning efforts have nothing to do with law, planning, justice or security, but rather with the ambition for ethnic domination on the ground:

“I want the Negev to be Jewish […] The Jewish settlement must grow, must continue. At the same time we must develop the Bedouin settlement, because if we don’t make it permanent now, we will find ourselves in 20 years, not with 45 [Bedouin] settlements, but with 90 settlements. […] What do you mean by “they also deserve”!? You know what – after all this, it is no longer possible to conceal the core problem, which is the struggle over land. Who does this land belong to – us, or them? Time will tell.”

Time indeed is key for Zionism, but it doesn’t necessarily work to its advantage. Despite Israeli governmental hopes and efforts to settle the desert with Jews, Israeli-Jews were never keen on living in the desert, to put it mildly. The first Israeli Prime Minister Ben-Gurion even went to live there, trying to set an example for others; but, with the exception of (mainly Mizrahi) immigrant communities forcibly sent to the dessert and often leaving it later, and a few self-styled “cowboys,” Jews rarely choose to live in the Negev.

The more Israel failed to bring Jews to the desert, the more their efforts to “minimize” the presence of its other residents grew. Jews voted with their feet, and their leaders with bulldozers, channelling their growing frustration of Israeli Jews towards indigenous residents.

In recent years, the voices calling for Bedouin rights have grown stronger, finding partners among egalitarian Israelis, and they have gradually become more present in Hebrew public discussion. This process runs parallel to a general trend that enables Palestinian history and narratives to be heard more clearly in Israel. As a result, the will of governments to subordinate the Bedouins has become more urgent and determined, as expressed in the toughening force, frequency and cruelty of expulsion efforts.[8]

Despite the fact that there was and is no problem of population density in the Negev, this year alone the unrecognized Bedouin village of Al-Araqib was violently demolished 26 times (!), leaving women, children and men without a roof, in the middle of the desert, usually at night and in extreme weather conditions, and often using illegal methods (including false and violent arrests, shooting, damage to personal belongings and to water sources, despite court orders to the contrary).

Bedouin ownership in the Negev

There is no dispute over the historical presence and ownership of the Bedouins in the Negev. They have lived there for generations, long before Zionism. The map at the head of this post, sketched by the Ottomans in the late 19th century, shows arrangements of ownership among tribes over the Negev, when the majority of Bedouins had already settled in permanent settlements. The Ottomans, and later the British Mandate generally respected these arrangements, and the Zionist movement recognized them de-facto by occasionally purchasing land from them for settlements. Following the 1948 war and its exodus, most Negev Bedouins became refugees. According to Israeli sources, only 13,000 of 76,500 Bedouins remained in the Negev following the war.[9] An ethos often nurtured among Zionists depicts the Negev as an ownerless wasteland, epitomizing slogans like “a land without a people awaiting a people without a land”, and “make the [empty] desert bloom.” But the land was not empty, but emptied, and Zionists, on the whole, did not come.[10] 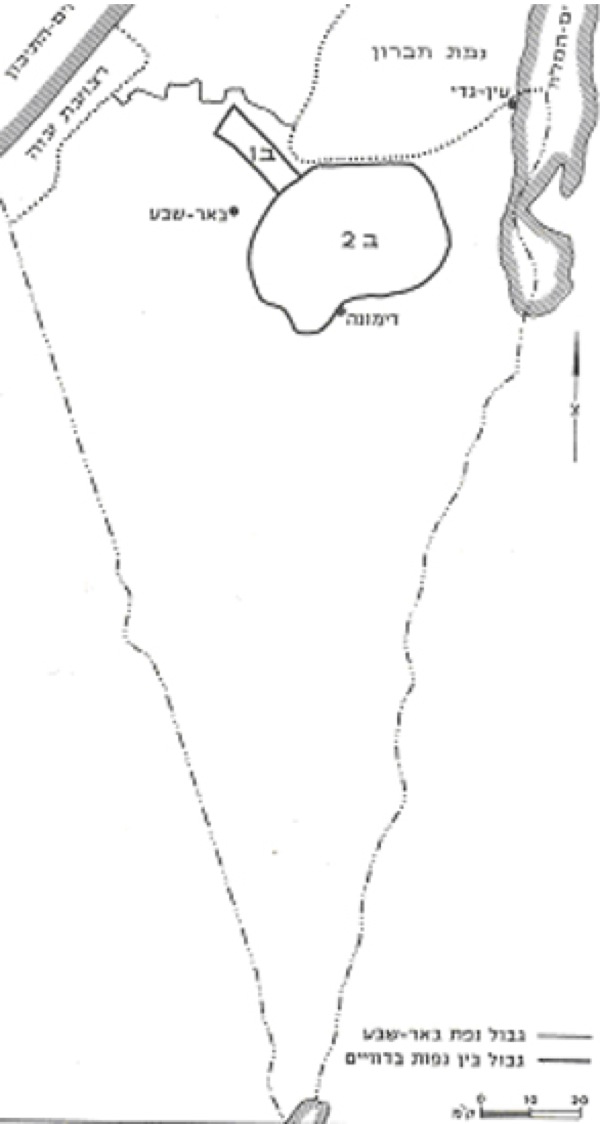 The area of the Negev to which the Bedouin were restricted after 1948.

Following the war, Israel restricted the remaining Bedouin citizens to a relatively small territory called “the boundary region” (“Siyag”), in order to better impose military rule on them,[11] and confiscated most their lands. This second map shows the area into which they were corralled. (Please take a moment to appreciate the difference from the first map.)

Interestingly enough, unlike most Palestinians, Bedouins overall waived their claim for the land thus grabbed, and no longer struggle for it. For over 60 years Bedouins in Israel desperately tried to prove that they have cast their lots with the Jewish state, but apparently phobias and the fantasies on making the Negev “Jewish” are stronger than reality. Bedouins gained nothing from their pact with Israel. Israel has persistently refused to “recognize” or provide any service to dozens of Bedouins villages, and the current plan will evict the remaining Bedouins from the small area they are already confined to.

1. Israeli Bedouins are Palestinians according to the most common definition of Palestinians: “Permanent Arab Residents of Mandatory Palestine, and their decendents.” Many of them adopt this identity (in growing numbers probably), but many of them reject it, seeing themselves as Israelis, and considering Palestinians and Israelis to be binary identity categories that void each other, and that cannot coexist in one.

2. The plans for eviction of Jews were only from settlements, mostly in the Gaza Strip, which is outside the official borders of Israel. Another mass displacement of Palestinians was carried out by Jordan, partially due to Israeli threats

3. Demolitions included villages in the Golan Height, the West Bank and the Old City of Jerusalem. In Jerusalem, the Jewish Quarter was evicted, and the houses in front of the Wailing Wall were demolished (one of them on an old Palestinian woman), while using illegal orders.

4. East Jerusalem – This term refers to the areas annexed to Israel (and Jerusalem) following the 1967 war, of which only 8.5% was indeed part of Jerusalem (i.e. 1 km2 of the old city, and 5 km2 of adjacent Jordanian municipality areas); whereas the majority of the annexed land (65 km2) is of 28 proximate villages.

5. Israel hopes to make their lives unbearable enough, for them to leave “voluntarily.”

6. It should be mentioned that since the establishment of Israel, hundreds of new towns and cities were established for the benefit of Jews, whereas for Arab citizens, who constitute 20-25% of Israel’s citizens, only seven failing and backwards small forced-migration Bedouin towns were ever built. These towns suffer from severe lack of resource for decades, and are now designated to receive the evicted Bedouin population.

7. To watch him (in Hebrew), choose “Program 2”, and go to 03:14-04:40. Before the quote the film shows a demolition of the village, and a movie produced by the Israeli Lands Administration, animating Bedouin settlements growing like cancer, taking over the Negev.

8. This tendency is most similar to the demographic efforts in Jerusalem, since the 1970’s, where policies and practices have been growing stronger as Israeli-Jews emigrate from the city, despite governmental hopes and efforts.

9. Consequently, they had neither the ability nor the need to cultivate all of their agricultural lands. The State of Israel which is now not recognizing their ownership, did recognize it unofficially when it was used during the food shortage of the 1950’s.

10. Prior to the Israelis, Ottomans also failed their efforts to encourage residency in Be’er Sheba.

11. The Military Rule (1948-1966), was a military regime applied to the Palestinians who became Israeli Citizens. It is similar to the Chinese regime in Singapore, the Indian rule in Pakistan, or the Israeli occupation today, only it was imposed on Arab citizens of Israel. Living under military rule, these citizens needed a permit for every daily action, from work, to publications, to study textbooks, to travelling to the next village. Military rule was lifted after about 18 years.

This article was originally posted on Jnews