While disavowing the American ambassador’s erroneous assertion that only 2% of the West Bank is occupied by Israel, the State Department spokesperson isn’t able to answer how much of the territory is actually occupied. (Hint: All of it.) 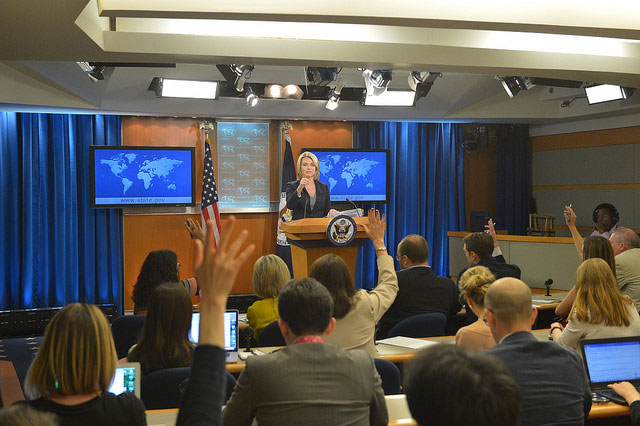 U.S. Ambassador to Israel David Friedman caused a small stir Thursday by erroneously stating that Israel only occupies 2 percent of the West Bank. The Israeli army rules over the entirety of the West Bank under military law, of course, making it 100-percent occupied.

The truth of the matter is that nobody took Friedman’s remarks all that seriously, although the whole affair made for some great headlines. Despite being the White House’s official envoy to Israel, Friedman is known for speaking for himself instead of in his official capacity. So nobody was too surprised.

What was surprising, was that when asked to clarify, the State Department itself could not — or would not — answer how much of the West Bank actually is occupied by Israel.

Then things got weird.

Here is a transcript of the exchange (Video, from 25:00 minutes):

Matt Lee: [A]mbassadors to every country are supposed to speak for and with the authority of the President of the United States. Do you not see that this is causing confusion?

And then as a purely factual matter, how much of – what percent of the West Bank does the United – does the administration believe is occupied?

Lee: You’ve got a lot of maps on that.

Nauert: Do we have a lot of maps?

Nauert: Okay. Well, see, you all pre-date me here. I’ll go pull out some —

There you have it. Somewhere on the dusty shelves of Foggy Bottom, there are many, many maps that might be able to shed some light on what the United States’s policy in the Middle East actually is.

Or maybe it’s this map: