Instead of going to the Kotel, go to the Palestinian neighborhoods of East Jerusalem and to the ghettos encircled by the separation wall. You will see a very different Jerusalem than the one you idealize. 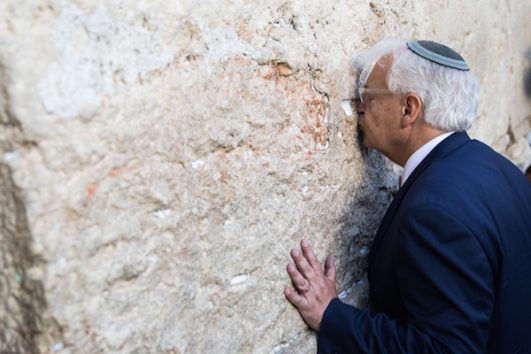 Since your appointment as U.S. ambassador to Israel, you have exhibited a great deal of interest in Jerusalem, undoubtedly an expression of your genuine love of the city. Unfortunately, as we all know too well, love alone is never enough.

In the spirit of full disclosure, let me state that Ir Amim, together with Israeli residents of Arnona, has filed a petition against the circumvention of the Planning and Construction Law in order to expedite the move of the American embassy to May 14th. The process by which the embassy’s move is being conducted — and the very move itself — do nothing to contribute to good neighborly relations.

Your future neighbors in the Arnona neighborhood are already protesting the extensive damage that will be caused to their community by the rushed construction, as well as the denial of their legal right to submit objections and consider potential alternatives.

Even before the embassy changes locations, the move will entail the subversion of law, cause environmental damage, and antagonize your new neighbors. These considerations are not only problematic in and of themselves; they are symptomatic of much larger neighborhood problems.

Those of us who live here in Jerusalem are concerned that people who reside outside of it do not always appreciate the complications of living life in a conflicted city. You recently declared that Jerusalem, under Israeli rule, serves as an exemplary model of co-existence. As a native resident of Jerusalem, this declaration strikes me as the typical sentiment of a recent arrival. Anyone truly familiar with the city from within cannot help but adopt a much more nuanced view of the situation.

On your next visit to Jerusalem, if you diverge from the traditional tourist itinerary, I believe you, too, will appreciate the much more challenging complexities of our city. Were you to visit Issawiya, A-Tur or Sawahra — or your future neighbors in Sur Baher and Jabel Mukaber — you would see more clearly Jerusalem’s fault lines. 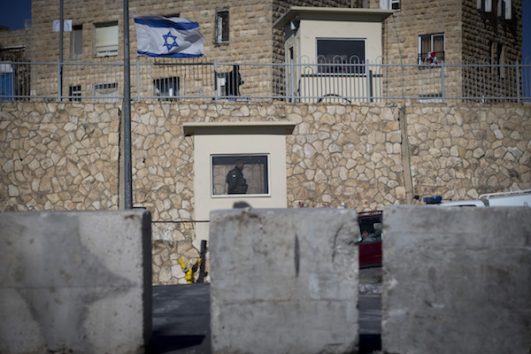 Israeli Border Police officers guard near a road block at the entrance to the East Jerusalem neighborhood of Jabel Mukaber on January 9, 2017 (Yonatan Sindel/Flash90)

If you have never been to these places, you are not alone; most of the politicians who wax poetic about Jerusalem have never been either. Should you pay a visit to these areas of East Jerusalem, you will discover that after 50 years of Israeli rule, their residents are among the poorest in both Israel and Palestine, with the exception of Gaza. Even so, the residents of these neighborhoods still “have it good” in comparison to the 120,000 residents of the East Jerusalem neighborhoods who are disconnected from the city by the separation wall, confined to ghettos, and required to pass through checkpoints to enter their own city.

Moreover, virtually none of the residents of East Jerusalem, who constitute almost 40 percent of the city’s population, hold citizenship status and, according to the law, do not belong to the polity that governs their lives. Even the civil rights that enable your prospective neighbors in Arnona to object, without fear, to the infringement of their rights cannot be taken for granted by the city’s Palestinian residents, who do not enjoy the benefit of political representation and to whom the law does not accord proper legal protections. And apropos of the embassy move, in the context of planning rights, a cursory check of data will expose marked disparities in the allocation of permits for residential and public buildings between the two parts of the city. Discrimination in planning is one of the most revealing indicators of unequal treatment between Israeli citizens and Palestinian residents of Jerusalem.

With all due respect, Ambassador Friedman, these circumstances — a perfunctory representation of the inequities between east and west Jerusalem — are not a recipe for co-existence. Contrary to the customary portrayal of Jerusalemites as extremists, residents from both sides of the city are generally moderate people – the very reason why we are able to avoid even more violence in our city. We are aware that we live on the edge of a volcano and do our best to live and let live.

Yes, Palestinians and Israelis interact in Jerusalem, but in spite of, not because of, the reality that has been imposed upon us. Ours is a reality supported by very delicate balances that, unfortunately, the administration you represent is helping to erode. When President Trump explained his decision to move the American embassy to Jerusalem as a simple confirmation of reality, exactly what reality did he have in mind? Official recognition of a reality defined by endemic discrimination and structural inequalities only worsens and validates that reality. It is precisely the context of an extreme power imbalance in which decisions with symbolic importance like the recognition of Israeli sovereignty over Jerusalem and the moving of the embassy have such momentous significance. Precisely because of the current reality in Jerusalem, the date chosen for the move can only be understood as further provocation of its Palestinian residents.

Please indulge me in imparting one more piece of neighborly advice: if there is any lesson to be learned here in Jerusalem, it is the necessity of patience. If you truly love Jerusalem, please respect the laws of the city, whether by adhering to planning laws or observing the true essence of the city, which is and will always remain the home and future capital of two peoples.

Yudith Oppenheimer is the executive director of Ir Amim. A version of this article appeared in Hebrew on Local Cal. Read it here.