Twos hundred Israelis march against the eviction of the Shamanseh family from their home in Jerusalem’s Sheikh Jarrah neighborhood. Passersby throw eggs, while settlers attack them with pepper spray. 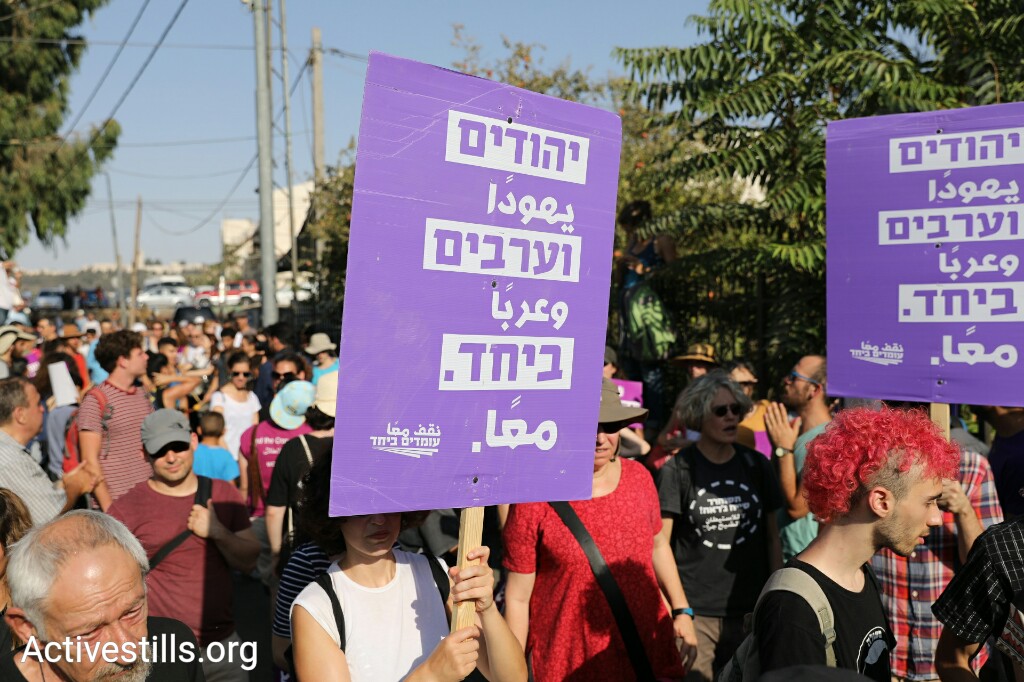 Hundreds of Israelis march from West Jerusalem to Sheikh Jarrah to protest the eviction of the Shamanseh family from their home, September 8, 2017. (Oren Ziv/Activestills.org)

Over 200 Israelis marched from central Jerusalem to the neighborhood of Sheikh Jarrah Friday to protest the eviction of a Palestinian family from their homes. The demonstrators marched on West Jerusalem’s thoroughfare until they crossed over into the Palestinian neighborhood, where they were met by dozens of local Palestinian protesters.

The march comes less than a week after Israeli security forces evicted the Shamanseh family from their home, the first such eviction in eight years, allowing Israeli settlers to take over the property.

Large police forces arrived at the Shamanseh family home early Tuesday morning, along with a large truck to carry their belongings, following days of police visits to help prepare for the eviction. Three settlers swiftly entered the home and took over the property. The family — made up of eight people, including young children and two elderly parents — have lived in Sheikh Jarrah since 1964.

On Friday, police arrested two residents of Sheikh Jarrah who marched in the direction of the Israelis, one for waving a Palestinian flag, and the other — a minor — following settler complaints to the police. The minor was only detained for a short period of time, although his mother collapsed and had to be taken to the hospital upon his detention. Meanwhile, during the Israeli march toward Sheikh Jarrah, a passerby threw eggs at the demonstrators. Among the marchers were Joint List head Ayman Odeh and Yousef Jabareen, also of the Joint List. 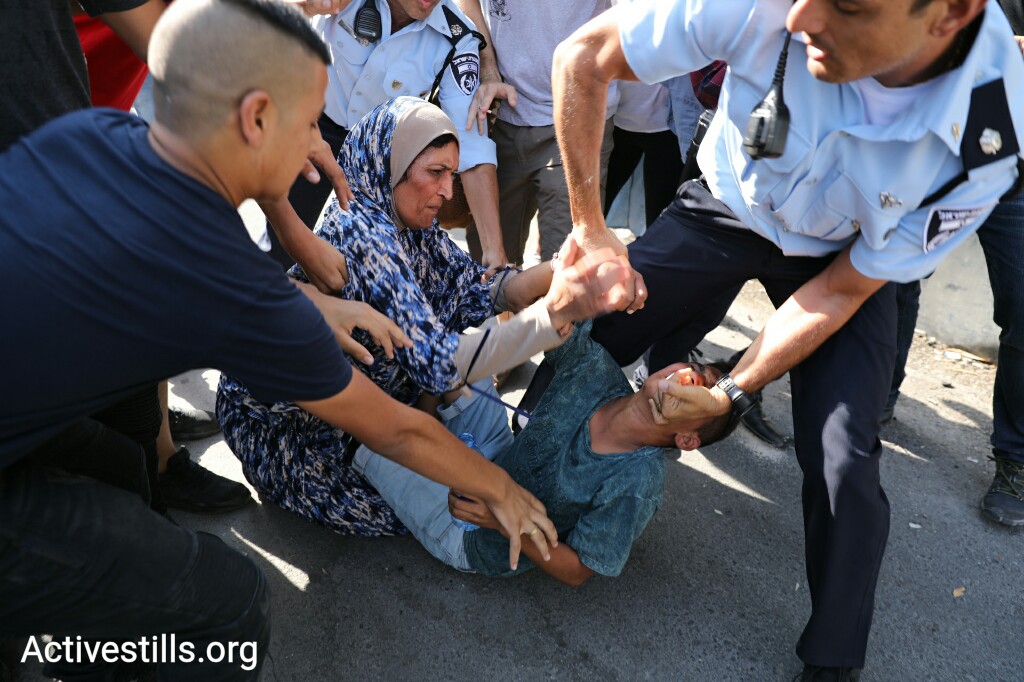 Police arrest a minor during a protest against the eviction of the Shamanseh family from their home in the East Jerusalem neighborhood of Sheikh Jarrah, September 8, 2017. (Oren Ziv/Activestills.org)

After the marchers arrived in the neighborhood, one of the Israeli protesters climbed the Shamanseh family home and removed the Israeli flag hung by settlers who had commandeered the house. In response, the settlers attacked some of the protesters, throwing stones and pepper spraying them. Two Israeli marchers were arrested.

Over the past decade Sheikh Jarrah has become one of the focal points of the attempt to Judaize East Jerusalem by messianic right-wing organizations. The family’s eviction is the first step in a larger plan to Judaize the neighborhood and turn it into a settlement. Two other families in Sheikh Jarrah are also currently facing eviction and are likely to be kicked out of their homes in the coming months. 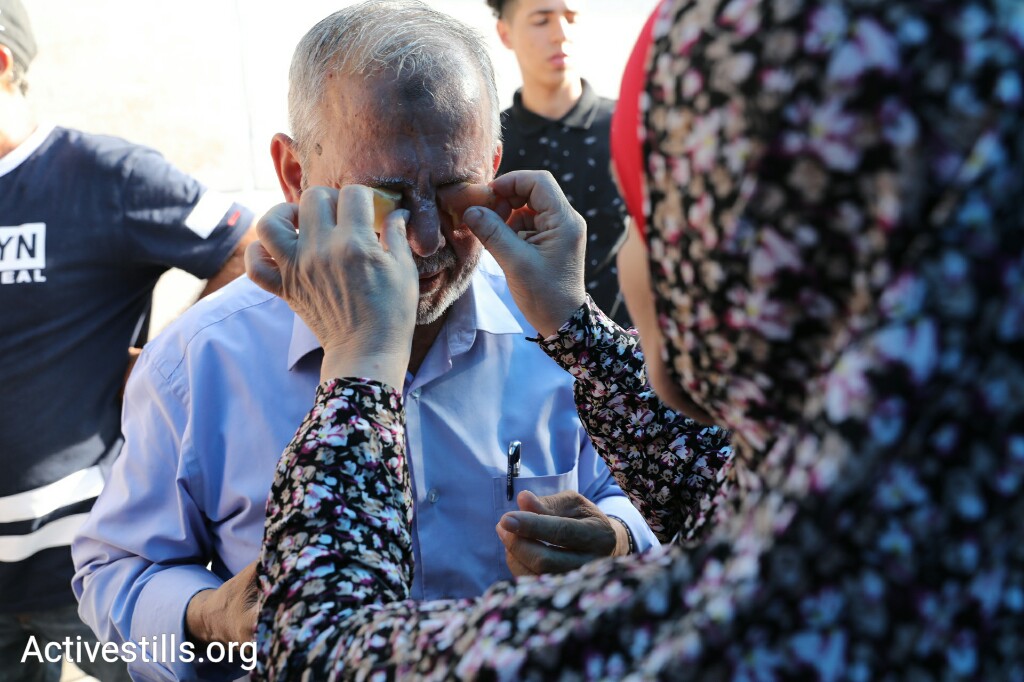 A Palestinian man recovers after being pepper sprayed by Israeli settlers who took over the Shamenseh family home, during a protest against their eviction, Sheikh Jarrah, East Jerusalem, September 8, 2017. (Oren Ziv/Activestills.org)

The majority of the residents in Sheikh Jarrah are descendants of Palestinian refugees from West Jerusalem, Jaffa, Haifa, and Lod. After Israel’s establishment, they were resettled in the neighborhood.

Until the 1948 war, the land on which some of the families live today belonged to Jews. After the war, the homes belonging to Jews were taken over by the Jordanian Custodian of Enemy Property, which rented them out to Palestinians. Following Israel’s occupation of East Jerusalem in 1967, the land was transferred back to Jewish hands. This time, the Palestinian families remained in the homes, and began paying rent to the Israeli Custodian of Absentee Property.

But as opposed to Palestinian refugees who lost all legal rights to their property, Israel still allows the original Jewish landowners in Sheikh Jarrah to reclaim their property, while evicting the Palestinians who have been living in those homes since the 1950s and 60s.

“The cruelty of the evictions in Sheikh Jarrah are the epitome of Israeli apartheid. The law allows only Jewish families to reclaim their homes from before 1948,” Odeh said during the march. 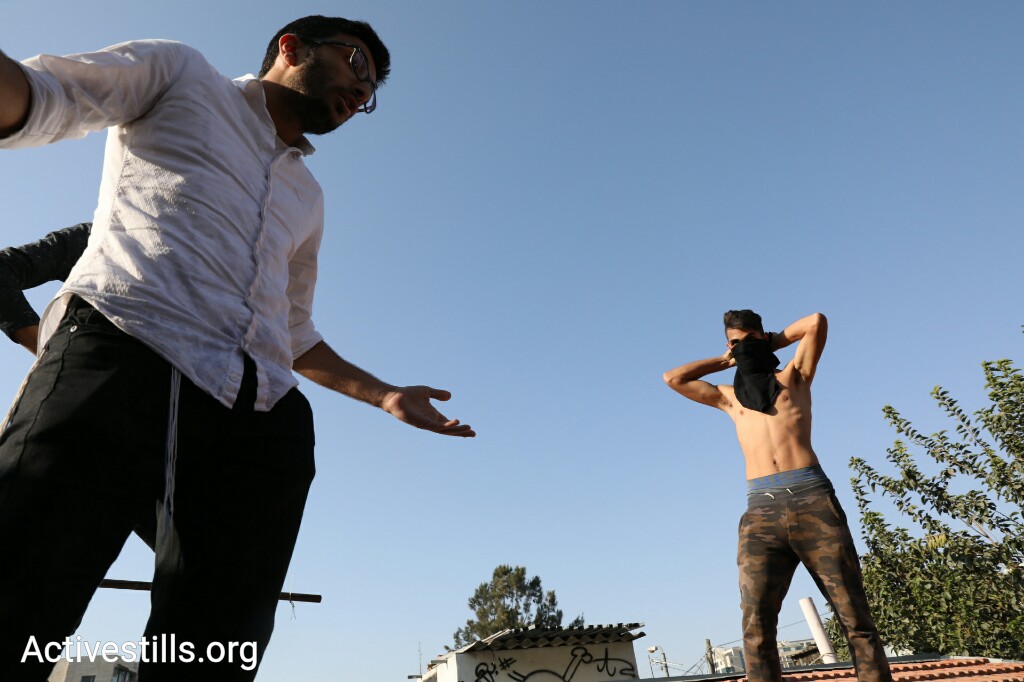 A Palestinian and settler face off on the roof of the Shamanseh family home, during a protest against their eviction, Sheikh Jarrah, East Jerusalem, September 8, 2017. (Oren Ziv/Activestills.org)

The Israel Land Fund – a right-wing settler NGO that seeks to Judaize East Jerusalem – contacted the descendants of the Jewish owners of the land on which the Shamasneh family’s house stands, representing them in a bid to restore it to its original owners. In 2013, after a long legal saga, Israel’s Supreme Court upheld a ruling by lower courts, ordering the family to be expelled from their home with a grace period of 18 months, due to humanitarian concerns. The family had not received an eviction order until late July of this year, after which their attorney only managed to obtain a number of short-term injunctions.

This past week, Haaretz reported that one of the heirs of the house, who sold the asset to the Israel Land Fund, said she felt bad about doing so. Meanwhile, former Attorney General Michael Ben Yair, a descendant of a family who lived in the neighborhood until 1948, declared that he is willing to reclaim the house they lived in — just as right-wing organizations do. Instead of Judaizing it, however, he will transfer ownership over to the Palestinian family that currently lives there.

Haggai Matar contributed to this report. Yael Marom is Just Vision’s public engagement manager in Israel and a co-editor of Local Call, where this article was originally published in Hebrew.