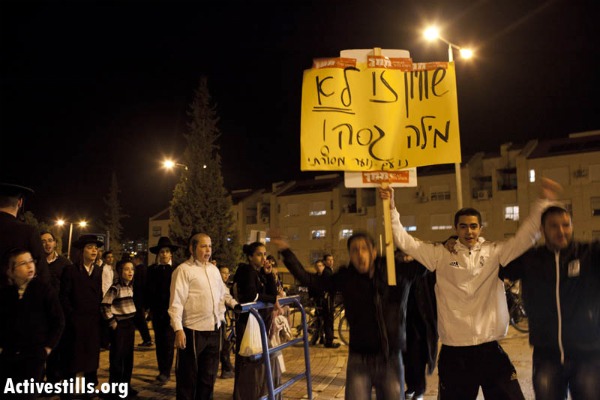 This post was written by Dahlia Scheindlin, Ami Kaufman, and Yossi Gurvitz

About 4,000 people demonstrated in Beit Shemesh on Tuesday evening, including a parade of politicians from a spectrum of left and right parties, both secular and religious, to protest what is perceived as the “Haredization,” of the city, a takeover by the ultra-orthodox.

The immediate events sparking the protests were a series of incidents highlighting gender discrimination – a group of Haredim spitting on an eight-year old religious girl, and the struggle over gender-segregated (women in the back) buses in Jerusalem; and more broadly, the exclusion of women from public life in general (known as hadarat nashim). On Sunday, a nasty scuffle between Haredi groups and Israeli journalists ratcheted up the tensions.

Many of the religious residents (known as “national religious,” or “religious Zionists,”) are as outraged as the secular community about these trends.

The general Haredi line seems to be that it’s all just a bunch of fringe radicals, blown completely out of proportion by the media. That line is so widely shared, that in fact it was repeated almost verbatim by pretty much every Haredi who was willing to share a few words with me at the demonstration. Just one Haredi man I asked was willing to elaborate, parsimoniously: “get the Ministry of Transportation to stop persecuting us, and everything will be OK.”

Ami Kaufman: The crowd was mostly local, very Masorti (traditional), religious, and a good turnout of Haredim as well. I didn’t see any of the usual liberals I notice at left wing demonstrations – which is a shame. 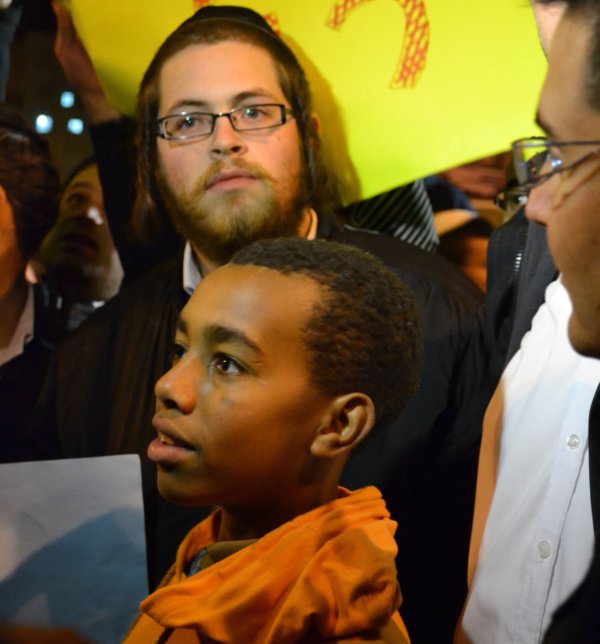 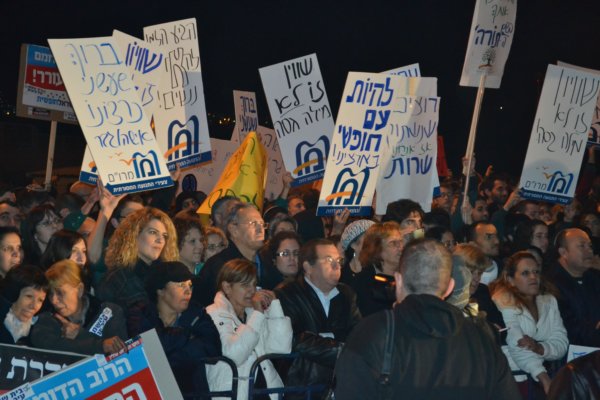 There was lots of hatred for Beit Shemesh Mayor Moshe Abutbul [largely seen as facilitating the expansion of the Haredi presence, at the expense of the majority of Beit Shemesh residents. According to Yediot today (print version), the city of roughly 90,000 is about 65% non-Haredi – secular, traditional and religious – ds].

I found it amusing most of the chants, such as “we won’t give up on Beit Shemesh” were sung to the bass intro of White Stripes “7 Nation army”. Seriously. Every chant. 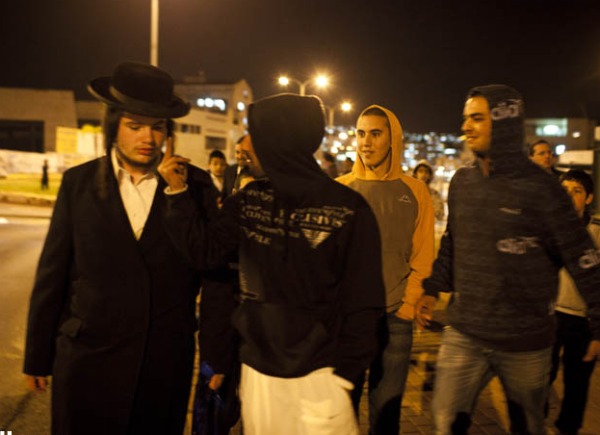 I thought it rather refreshing to see a demonstration of a very different crowd than the usual Tel Aviv types – the Ethiopian immigrants, religious folks, working class made it into a more diverse reflection of Israeli society.

But I was struck by a few problems:

First, the demonstration was dripping with Army worship. IDF service is turning into the symbol of entitlement, as in “we served in the army, therefore we deserve…” (housing, appropriate city planning, etc.). It’s understandable, as Haredi draft exemption is the most visible manifestation of inequality of rights and duties that are legitimized by the state. How long are we going to obsessively perpetuate the notion that IDF service buys basic civil rights, equality and fairness that ought to be granted to all citizens of a democracy?

Second, the argument that Haredim should be left alone to live out their values as long as they are not imposed on others raises all the problems of multi-culturalism that were hashed out in the 1990s. There must be a shared set of fundamental values in society. Moral relativism does not work.

The line that it’s all exaggerated press sensationalism is a clear outgrowth of the pan-Israeli tendency to deny all unlawful or immoral policy as merely poor communications or failed image-management. Haven’t we taken this whole post-modern, manufacturing consent thing far enough? Sometimes immorality and unlawful behavior really are just that.

Finally, I was unmoved by an op ed in Israel Today by the normally very astute Dr. Aviad Hacohen, a thoughtful and critical legal scholar, who is also religious, asking people not to brand or stereotype all Haredim, and to show some sensitivity.

Sensitivity? Haredim are the greatest beneficiaries of Israel’s distorted social, political, and economic policies. Haredi parties are 16% of the current Knesset, although they are nine percent of the population. Arab/Palestinian citizens are 20% of the population, but Haredi parties sit in the governing coalition; Arab parties never do. Roughly 65% of Haredi men don’t work, and there go my hefty monthly National Insurance payments – not, heaven forbid, to me. As a free lancer, no matter how much I pay, nobody will take care of me if work slows down.  I think I’ve demonstrated an awful lot of sensitivity up to now, thanks.

There’s much debate about these trends representing fringe radicals, as if the perpetrators are totally disconnected from their social milieu. Like aliens. When will people start taking responsibility for the failings of their communities?

Yossi Gurvitz: Never made it [to the demo]. We got stuck in the huge gridlock before the town. After timing 600 meters in 36 minutes… (and, admittedly, some 1.2 kms in the next four minutes), we took the next turn and fled to Tel Aviv.

Organizers claimed that the entrance to the city had been blocked by Haredim. Maybe millions of others wanted to come, but encountered traffic problems.