What is the connection between Israel’s labor union, Jesus’ childhood home and Ol’ Blue Eyes? 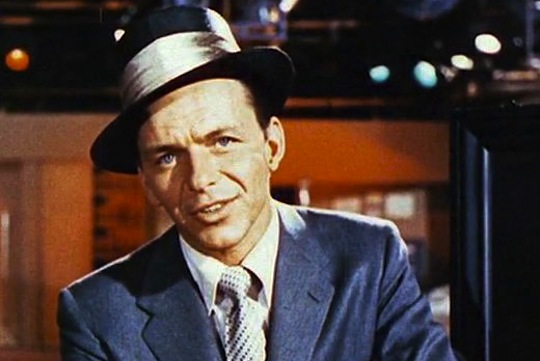 When Christian tourists come through Nazareth on the half day their guidebooks recommend, they take the suggested walk around the old city, see the Basilica of the Annunciation, stop for ice cream, maybe even visit the Souq.  What they do not see is any mention of their favorite crooner from the 1960s – Frank Sinatra does not regularly come up in conversation. This may not be surprising to them, but it would be to him.

1962 was a very good year for Frank Sinatra. He gave concerts in Hong Kong, Japan, Italy, France, Greece, England and one other country that had always held a special place in his heart: Israel.  The World Tour for Children, which he funded personally, ended up raising over $1 million for children’s charitable causes worldwide. Over $50,000 of that money found its way to Nazareth, and it was only the beginning.

Sinatra’s love for Israel was lifelong; He was known for wearing a miniature mezuzah around his neck in memory of a childhood neighbor. And since Sinatra was a practicing Roman Catholic, his tour of the holy land included many significant Christian sites. He came to Nazareth for a week to see holy Christian sites like Mary’s Well and Joseph’s Workshop on his way to the Sea of Galilee, but he was struck by the people he met living in Nazareth.

Here, Sinatra saw an opportunity where his considerable wealth could make a difference.

In the tour documentary, he specifically mentions his support for the “Israel Histadrut Campaign” which, according to Sinatra, “opens the gates of opportunity for thousand of boys and girls.” He bought a parcel of land near Mary’s Well and tasked the Histadrut (the national Israeli labor union) with building the Frank Sinatra Brotherhood and Friendship Center for Arab and Israeli Children; presumably it would serve to open the gates of opportunity.  He donated the profits from his concerts in Israel to build the center and to encourage inter-cultural exchange between the Palestinian Arabs and the Israeli Jews. 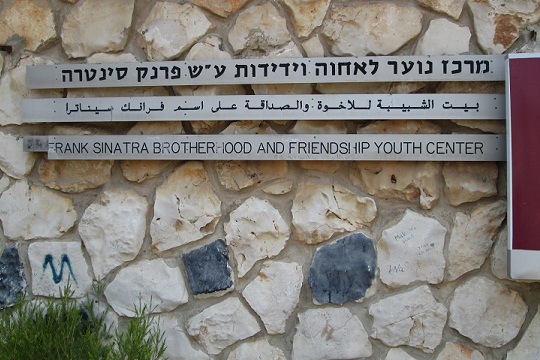 Unfortunately, all Sinatra donated was money.  He did not help develop or organize any specific organization to bring his vision of cultural exchange into reality. After presiding over the groundbreaking ceremonies of the Center, he moved on from Nazareth. From that point the property fell, in operational capacity, to the Histadrut.  Sinatra returned to Nazareth in 1965, he was shooting a film in Israel with Yul Brenner, to dedicate the Center and donate a further $100,000, the total fee for his appearance.

In the 1960s the Histadrut was a politically controversial organization, only admitting Arabs as members in 1959. Additionally, Arabs who joined were seen as opportunists because they were living under military rule.

In 1962, George Sa’ad was the Nazarene leader of the local Histadrut branch, which meant managing Sinatra’s $150,000 donation. Sa’ad used the money to establish a non-profit organization intended to organize youth groups and solicit donations to sustain the center.  Yet despite his best efforts, there is no clear evidence of any inter-ethnic, inter-faith, or inter-cultural youth groups meeting at the Sinatra Center.

1967 saw another $100,000 donation from Sinatra to the Histadrut.  His announcement of a further contribution to the Sinatra Center in Nazareth was the climax of a formal four-day conference in Miami Beach, Florida.

Even Suhail Diab, spokesman for the Nazareth Municipality, could not explain what happened to Sinatra’s original donation; it was exclusively a Histadrut-managed affair and no official government records remain.

In 2000, one woman, Safa Dabour, unwittingly began bringing Frank Sinatra’s vision back to Nazareth.  She did not know about Frank Sinatra and his donation;  he was just a name on a building with a great location. She founded El Sana, an association with a mandate to “find exciting ways to celebrate diversity and build a better, peaceful society.”  Supplying all her own start-up costs, she purchased development rights to one wing of the Frank Sinatra Brotherhood and Friendship Center for Arab and Israeli Children.  She funded the construction of Cinematheque, the only Arab-owned performing arts facility of its kind in Israel. It is a fully functioning movie theater and stage with an accompanying restaurant and bar.

El Sana has organized inter-cultural projects, including a film workshop for Arab and Jewish youth.  In 2004, the Cinematheque was chosen as one of two satellite hosts for the International Student Film Festival in Tel Aviv.  Students came to Nazareth for conferences and exhibitions that promoted the festival’s cross-cultural aspirations. When explaining El Sana’s programming, Safa says, “I wanted to help make peace for Arab and Jewish youth.”

Shahin Shahin volunteers at El Sana.  He defined his role as a “baytenjan” (eggplant), an Arabic aphorism that references the culinary versatility of the vegetable. He does a little bit of everything at the Cinematheque because Safa is his mother.  He said that, “only the sign remains of Frank Sinatra.  When people talk about the building, it is the Histadrut, never the Sinatra Center.”

Since learning of Frank Sinatra’s donation in 1962, Safa has tried to reconnect her advocacy with the Sinatra foundation.  Safa describes El Sana’s current mission as an unintentional realization of Sinatra’s plan. “The Cinematheque became the fulfillment of Frank Sinatra’s mission because Arabs and Jews come to watch movies.”

Safa and her son have been trying to find out what happened to the original donation, but to no avail.  She began soliciting the Sinatra Foundation as well as the Histadrut office which still occupies part of the Sinatra Center, but has no information regarding the center’s history.  In 2006 she sent a letter asking for information regarding the original donation in 1962 and about the possibility of a new donation in Sinatra’s name to El Sana.  She has sent three letters since and has yet to get a reply.

Frank Sinatra probably ought to have demanded more for his money in the first place. In the meantime, El Sana is actively looking for volunteers to help out with a family festival planned for September.

Paul Karolyi is an American living in Nazareth.  He is a human rights advocate for the Palestinian Arab minority in Israel and tweets @PaulKarolyi.