+972 is hosting today an op-ed written by B’Tselem chief Jessica Montell, in response to particularly insidious accusations levelled at the organisation by The Jerusalem Post star columnist, Caroline Glick. Montell’s op-ed doesn’t mince words – she calls Glick “a hack journalist who parrots any drivel” – but neither, to be fair, did Glick. Among other things, Glick claimed that a Palestinian shepherd whose complaint of a settler attack was monitored by B’Tselem “admitted he made the attack up”, a claim the shepherd has since consistently denied. She also accused B’Tselem of forging a video documenting a settler attack on Palestinians:

On January 3, Channel 2 aired a video produced by B’Tselem. The video purported to show residents of Yitzhar — a community in Samaria – throwing rocks at Palestinians from the neighboring village Bureen for no reason whatsoever.  Channel 2 presented the footage as further proof – if anyone needed it — that the Israelis who live in Judea, Samaria and eastern Jerusalem are a bunch of lawless, hate-filled, violent fanatics.

Unfortunately for B’Tselem and Channel 2, Yitzhar residents also own a video camera. And they also filmed the event. The Samaria Regional Council released the video to the media on Tuesday.   The Yitzhar video exposes the B’Tselem video as a complete fraud. As it happened, on Monday afternoon a group of Palestinians joined by Israelis and/or foreigners descended on Yitzhar and attacked its residents with bricks and rocks of all sizes.

Among the assailants was the cameraman who shot the footage presented on Channel 2. Not only did the videographer – who has blond hair – participate in the violent assault on Yitzhar. He staged the incident by alternately throwing rocks, filming, and directing his fellow attackers where to throw their rocks.   The Jews of Yitzhar only began throwing rocks to fend off their attackers.

Fortunately for B’Tselem, their video was shot from inside a house, as the footage clearly shows: 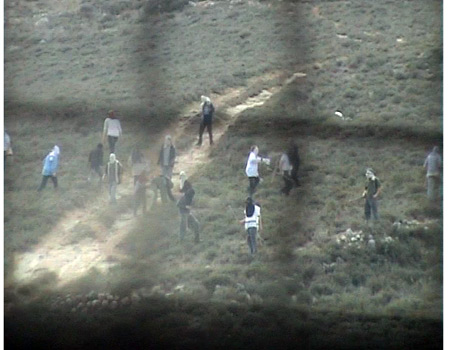 Footage from the Btselem video

Call me blind, but I can’t see a house around the cameraman in the Yitzhar video. Also, just for pettiness’ sake, the heavily redacted Yitzhar video shows him picking something from the ground but cuts before he throws it; and contrary to Glick’s emphasis on the cameraman having blond hair (explanation: Since Palestinians can’t be blond, it means this was a foreign-activists-agent-provocateur), the cameraman appears to be simply wearing a bright-colored hat.

The Jerusalem Post declined to publish a correction for most of the Glick claims, and also declined to run the Montell op-ed rejecting Glick’s allegations; this is why we on +972 decided to run the rejected op-ed ourselves, since we think it’s only just to afford someone charged with falsehood a space to counter the accusations. Although Montell decided not to file a libel suit, in line with the commitment to free speech outlined in her op-ed, B’Tselem did lodge a complaint with the Israeli Press Council.

The comments Montell refers to are only part of the problem;  Glick also falsely based the now-discarded claim about Jawaher Abu Rahma being at home, rather than at the Bilin protest that led to her death, on a report in The Independent. The full Glick quote ran:

As luck would have it though, eyewitnesses say that Abu Rahma didn’t even participate in the weekly riot. Ilham Abu Rahma, her 19 year old cousin and neighbor told Britain’s Independent that deceased was at home when the riot took place.

As luck would have it, indeed, because luckily The Independent‘s Jerusalem man Don Macintyre never wrote such nonsense. As he himself makes plain in a letter printed in The Jerusalem Post a few days later:

Sir, – Caroline Glick writes in “Agents of influence” (Column One, January 7) in reference to the death of Jawaher Abu Rahma from Bil’in, that her cousin and neighbor Ilham “told Britain’s Independent that the deceased was at home when the riot took place.” This is simply untrue, as even the most cursory reading of my story on January 3 would have clarified.

The report quoted Ilham as saying that during the demonstration she saw her cousin standing on a wall across the street from the house where Ilham was, and looking down toward a confrontation between local youths and troops – at a time when she, Ilham, was sufficiently troubled by both tear gas and “skunk” in the immediate area to go inside and shut the windows of the house.

I went on to quote Ilham as saying that her cousin collapsed in the street.

Glick’s interpretation of the events in Bil’in on December 31 is a matter for her, but she is factually wrong to claim that it is supported by the eye-witness account in the Independent’s report.

While The Jerusalem Post published Macintyre’s letter, Glick herself didn’t retract her false assertion, nor apologised. Instead, she implicitly admitted to their falsehood, by stealthily erasing them from the online version of the column; but obviously didn’t think abusing Macintyre’s name and credibility was bad enough to erase it from her own website as well.

This week, the Glick shtick was repeated in connection with her comrade-in-arms, Gerald Steinberg. Steinberg asserted in his January 10 op-ed that

“We [NGO Monitor] have shown the massive and often secret funding for highly political NGOs from European governments, and the European Union in particular. Europe, which preaches democracy and good government to others, blatantly violates the basic rules of funding transparency and open debate. An impenetrable shroud of secrecy hides all aspects of the processes by which the EU funds groups such as Yesh Din, Adalah, PCATI and many Palestinian groups.”

As noted and highlighted by Mitchell Plitcnick, The Jerusalem Post later ran the following letter from the EU Ambassador to Israel:

Sir, – Gerald Steinberg, in “Europe needs a parliamentary inquiry on NGO funding” (Comment & Features, January 10), claimed that the European Union “blatantly violates the basic rules of funding transparency” and talked of “an impenetrable shroud of secrecy” obscuring its funding procedures.

In fact, as Prof. Steinberg is fully aware from the various conversations we have had with him, funding of projects by the European Union worldwide is carried out by open and public calls for proposals published on EU websites, including the website of the Delegation of the European Union to the State of Israel. This is the link to where they are published: http://ec.europa.eu/delegations/ israel/funding_opportunities/ grants/index_en.htm.

The guidelines for project applicants clearly state the aims and objectives of the programs and are open for all to see. After a proposal has been selected it is included in the list of accepted projects, and remains on line throughout the entire length of the project. Here you will find the precise size of the grant, the name of the implementing organization, the duration of the project and a description of the project.

Moreover, all recipients of EU funding are contractually obligated to make publicly known the source of this funding.

A list of projects currently being funded by the European Union in Israel can be found via the following link: http://ec.europa.eu/delegations/ israel/projects/list_of_p rojects/projects_en.htm.

This list does not include the hundreds of projects funded in the field of scientific research, which are published separately.

Respect for and promotion of human rights are fundamental values shared by Israel and the European Union. This is enshrined in the Israel-EU Association Agreement that forms the basis of our relations.

AMB. ANDREW STANDLEY
Tel Aviv
The writer heads the Delegation of the European Union to the State of Israel

Here once again, The Jerusalem Post dutifully ran Amb. Standley’s letter, but Steinberg did not publish a retraction. I regret to have to say this isn’t exactly wholesome of the newspaper. If a writer in the paper makes an unsubstantiated claim  that a wall is black, and the owner of the wall provides proof that the wall is white, it’s dishonest to present the two claims as differing opinions on a subjective matter. The Post‘s failure to get the writers to publish an apology, to retract most of the claims against B’Tselem despite evidence provided, and to publish Montell’s response to Glick, has so far earned the paper a complaint to the Press Council. If the practice emerging out of these two incident continues, the day is not far off when the already financially strapped newspaper will have to face a libel suit.

I’ve worked for the Post briefly, immediately after graduation*, and I retain only the fondest memories; there are some very fine people there, who turn out an impressive product and keep a veteran publication alive despite very limited funding. It’ll be a shame to see their good work affected and their credibility questioned because of the irresponsibility of two op-ed writers.

* Proper disclosure time: I later left The Jerusalem Post to work for B’Tselem; which I also left after a few months.  Since January 2009, I’ve been employed by the English Edition of Haaretz, a translator/writer. That said, this blog is completely unaffiliated with the newspaper, and my editors were not consulted about my criticism of the Post.