Zubeidi, a former fighter who famously laid down his arms in a 2007 amnesty agreement, has been detained by the Palestinian Authority since May. A hunger strike to protest his detention without charge is threatening his life. 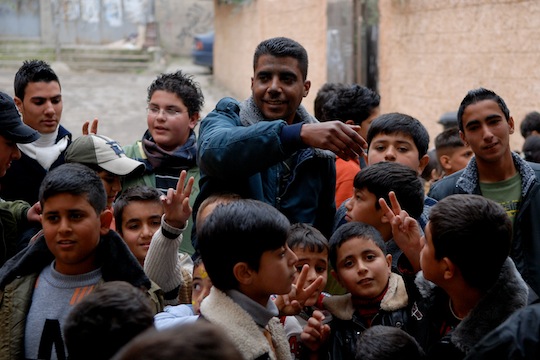 Heard of Zakaria Zubeidi? Most people around here have, but perhaps not in the past four months. This is because Zakaria has spent this time detained by the Palestinian Authority in Jericho Prison with no charges pressed, no evidence presented against him in court, and surrounded by nothing but a deafening silence.

Zakaria was arrested on May 13, as part of a crackdown by the Palestinian Authority in response to the death of Jenin governor Kadura Musa. Some 120-150 Palestinians were arrested after the attack on the governor’s house, which eventually led to the latter’s death from a heart attack. The majority of those arrested have since been released. However, apart from a four-day release for Eid al-Fitr, Zakaria’s detention has been extended time after time.

Complaints of torture and ill-treatment include having his hands tied behind his back and being pushed down a flight of stairs, being forced to drink water from a toilet, repeatedly having his arms tied together and raised in a painful elevated position for two days at a time, and being tied to an iron door outside in the heat of the day.

On Sunday last week, Zakaria initiated a “death fast,” refusing all food and drink in protest of his detention by the Palestinian Authority. On Thursday evening, after almost five days of fasting, he agreed to take some fluids ahead of an upcoming court hearing that was held yesterday (Monday), September 17. As the judge announced his decision to extend the detention for an additional 19 days, Zakaria raised his hand.

Visibly weakened by his hunger and liquid strike, supporting himself on the railings that separated him from the courtroom and speaking in an uncharacteristically frail voice, Zakaria declared he would be resuming his death fast: “From this moment I will not eat, drink, or speak.” Taking off his shirt, he said, “I’ve been a freedom fighter all my life. Can you see the wounds from the bullets that I took fighting for freedom against the Israeli occupation? I will not let you now be the ones to take my freedom away from me. You will see me again at my funeral in four days.” He was referring to a doctor’s opinion he received earlier that morning that he would not last more than another three days on a complete hunger and liquid strike.

This is an extreme move by an extreme man. A symbol of the Palestinian resistance during the Second Intifada, Zakaria in recent years gained increasing recognition internationally for his decision to sign an amnesty agreement with Israel in 2007, and to support The Freedom Theatre in the Jenin refugee camp in its efforts to create a movement of cultural resistance in the northern part of the occupied West Bank. But something seems to have gone terribly wrong.

Zakaria’s deadly predicament is clearly nothing but a complete disgrace for the Palestinian Authority, and one has to ask what anyone really has to gain from this situation. Of course, nobody expected that the shadow of Zakaria’s past would ever stop haunting him, but surely to have survived as one of the leading Palestinian fighters during the Second Intifada, only to commit suicide in a Palestinian prison a few years later can be nothing but bad news. For myself, and I believe many others, Zakaria’s death would strike a deadly blow to the Palestinian cause.

Jenny Nyman is the widow of late Israeli-Palestinian actor and director Juliano Mer-Khamis, who was gunned down outside The Freedom Theatre in Jenin in April 2011.