A firecracker was hurled into an Eritrean bar in south Tel Aviv late Saturday night, the latest incident in mounting violence against the African asylum seeker community in Israel.

On Eritrean customer was injured in Saturday night’s incident. The bar, located in the Hatikva neighborhood of Tel Aviv, has been the target of several attacks in recent months, most notoriously on May 23, when a demonstration against the growing African population in Israel turned violent. The bar was one of several refugee-owned properties that were damaged, its windows smashed and contents looted. Read more on that night’s events here. 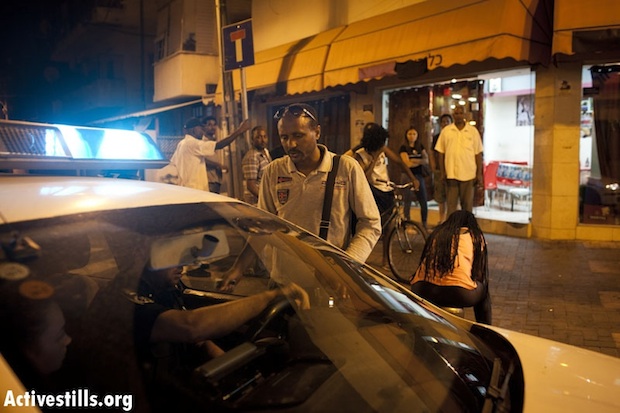 Amin, the owner of an Eritrean bar in south Tel Aviv, speaks to police on Saturday night (photo: Activestills)

Sigal Rozen, the public policy coordinator of the Hotline for Migrant Workers, recounted on her Facebook wall what she told the police in the aftermath of Saturday night’s attack:

I tried to explain to the policeman that Aminey suffers abuses and physical damages to his pub on a daily basis since the demonstration… the policeman answered: “It is not only him, it is all the Eritreans around here”… Aminey begs us to get him out of Israel, truly believing that it is only a matter of time before he will be murdered. 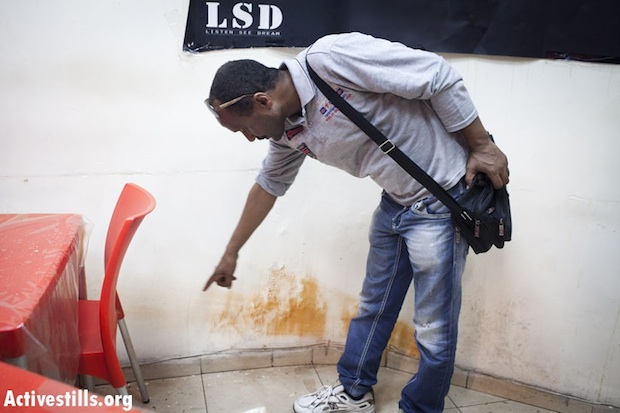 Amin, an owner of an Eritrean bar in south Tel Aviv, points to the marks left by a stun grenade thrown into his bar (photo: Activestills)