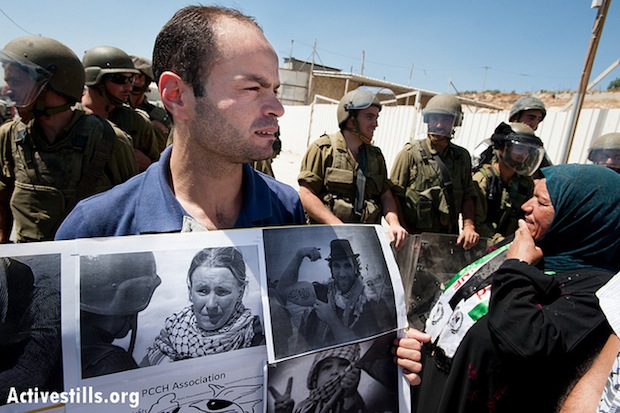 Friday protest against the wall in al-Ma’sara August 24, 2012. The late American activist Rachel Corrie is pictured in the sign. (Activestills)

Some 200 Palestinians and a handful of Israeli and international solidarity activists joined the protest in Kufr Qaddoum on Friday. The demonstration was dedicated to the commemoration of American peace activist, Rachel Corrie, who was run over by a bulldozer while attempting to prevent house demolitions in Rafah in 2003. The verdict in the civil lawsuit against the State of Israel in her case will be announced next week on August 28. The protest opened with speeches, following which the crowd started marching towards the main road of the village. Without any provocation on behalf of the protesters, the army started repressing the march with tear gas and rubber coated bullets. Fortunately, the demonstration ended without any arrests or severe injuries. 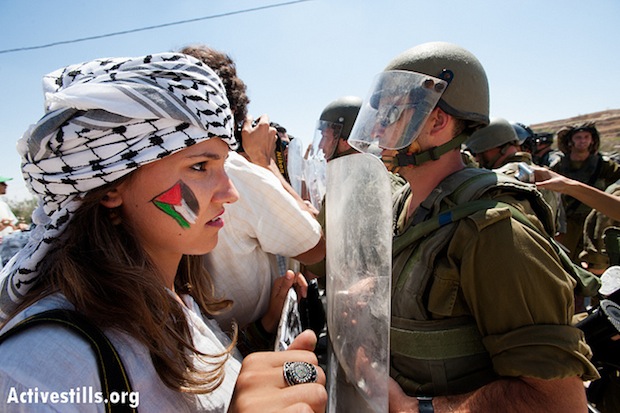 The protest in Ni’lin started with a sermon and prayers on the land, following which the demonstrators marched to the gate in the wall. The army unit that was stationed on the other side of the wall used tear gas canisters against the demonstrators, but did not make any attempt to cross the wall and conduct arrests.

In Bil’in, demonstrators marched to the Abu Lamon grove and burned tires near the barbed wire protecting the wall. The soldiers reacted with a barrage of dozens of gas canisters, rubber coated bullets and the “skunk.”

In al-Ma’asara, dozens marched to protest the confiscation of lands and the construction of the wall. The crowd marched peacefully to the end of the village, where the army was awaiting. The marchers advanced peacefully and were stopped by the soldiers. The crowd stood their ground, facing the army. Slogans against the occupation were chanted, and many demonstrators started talking to the soldiers. The march ended peacefully. The planned route of the wall in this area would cut off 3500 dunams of Palestinian land and would also cut off the village’s acess to water and the primary routes between Hebron, Bethlehem, and Ramallah—three of the largest cities of the West Bank.

The IDF conducted house-to-house arrests during the weekly demonstration in Nabi Saleh. For more information, see this photo report.