The bereaved mother and sister of Muhammad Asfour cry at his funeral in the West Bank village of Abud, March 8, 2013. Muhammad Asfour, 22, was hit in the head by a rubber coated steel bullet, shot by an Israeli soldier on February 22, 2013 during clashes at the entrance to his home village of Abud, northwest of Ramallah, during a solidarity protest for hunger striking Palestinian prisoners held in Israeli prisons. Asfour succumbed to his fatal injury after two weeks in the hospital. (Photo by: Oren Ziv/Activestills.org) Palestinians carry the body of Muhammad Asfour during his funeral procession in the West Bank village of Abud, March 8, 2013. (Photo by: Anne Paq/Activestills.org) 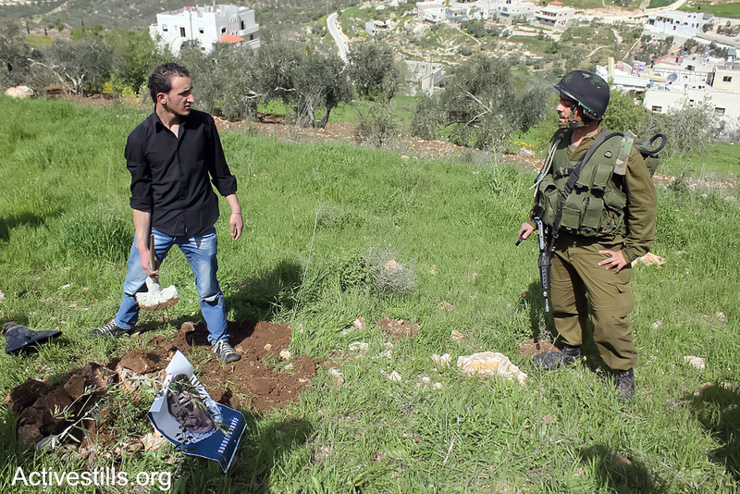 Israeli soldier tries to prevent Palestinian from planting olive trees on land which could be confiscated by the settlement of Yitzhar in Asira AlQibliya village, West Bank, March 11, 2013. All Israeli settlements in the occupied Palestinian territories are illegal under international law. (Photo by: Ahmad Al-Bazz/Activestills.org) 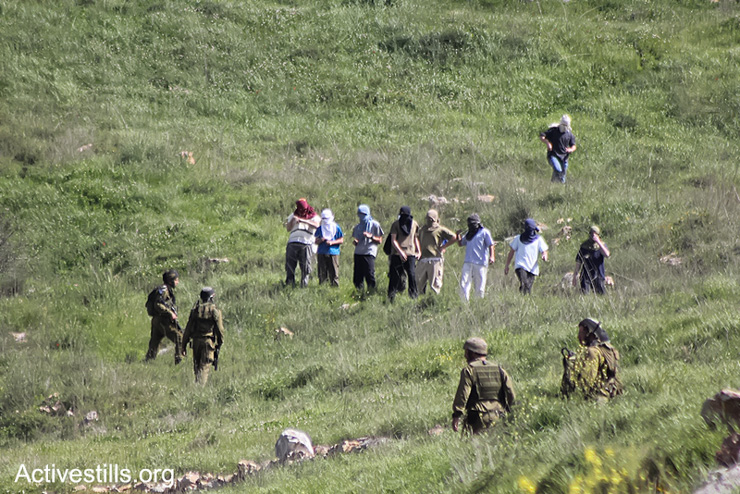 Israeli settlers try to attack international and Palestinian activists during an activity for planting olive trees on land which could be confiscated by the settlement of Yitzhar in Asira AlQibliya village, West Bank, March 11, 2013. Settlers armed with slingshots and stones descended the hill toward the residents of Asira AlQibliya. In the ensuing altercation, tear gas and rubber bullets were fired by the Israeli army toward the residents of Asira. (Photo by: Ahmad Al-Bazz/Activestills.org) Israeli Jewish women read from a Torah scroll during a prayer session near the Western Wall in the Old City of Jerusalem, March 12, 2013. The prayer was organized by the Women of Wall, a group which calls for rights of women to pray at Judaism’s holiest site without restriction. In the past months, the Israeli police arrested women who attended the prayers. (Photo by: Oren Ziv/ Activestills.org) 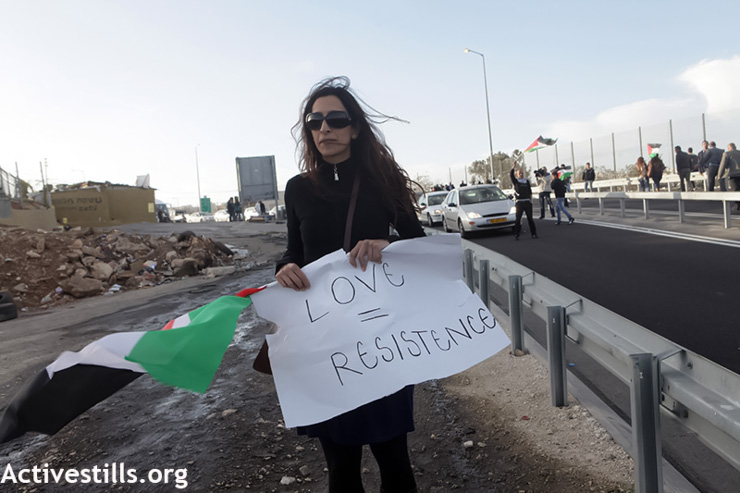 A Palestinian activist holds a sign during an action against the separation policy between Palestinians living in the West Bank married to Palestinians living in Jerusalem or Israel, Hizma checkpoint, West Bank, March 9, 2012. The action, which included a mock wedding, was suppressed by the Israeli army which prevented a bus of activists from reaching the place of the action, as well as a bride from the Jerusalem side. (Photo by: Anne Paq/Activestills.org) 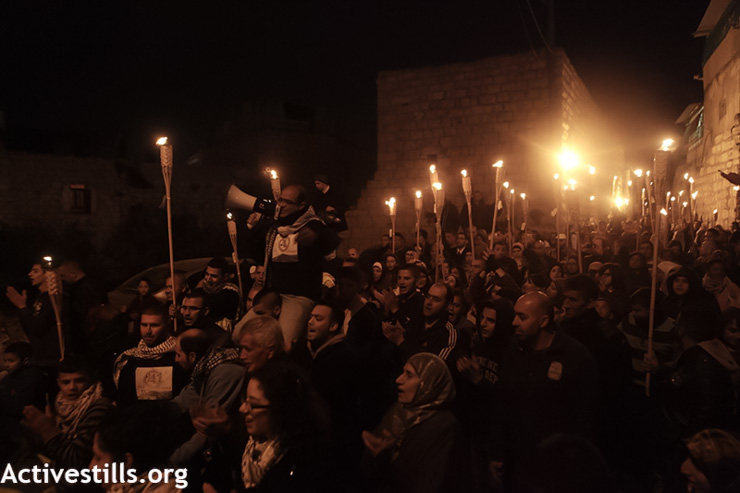 Residents of Beit Safafa march with torches to protest the four-lane highway that will cut through their town in East Jerusalem, March 7, 2013. The road is being constructed on privately owned land that had been designated for building homes in the densely populated town, and is being built despite the objections of local residents. The road will connect the various Israeli settlements of the southern West Bank with Jerusalem and is part of an ongoing campaign to isolate and surround the Palestinian neighborhoods of Jerusalem with Israeli settlements. (Photo by: Anne Paq/Activestills.org) 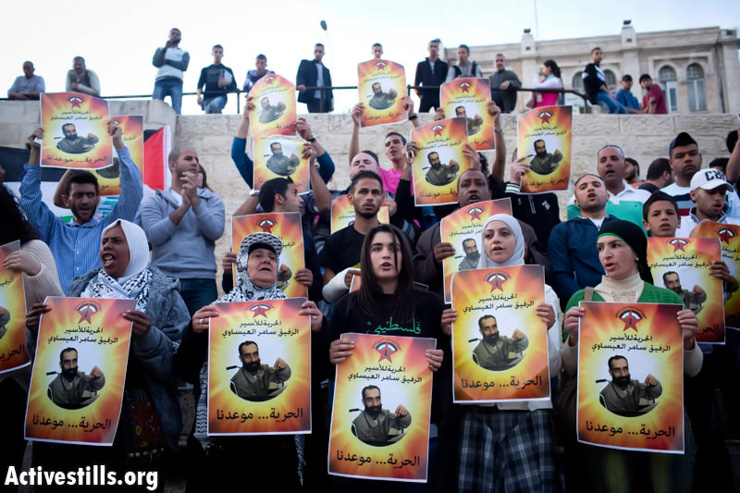 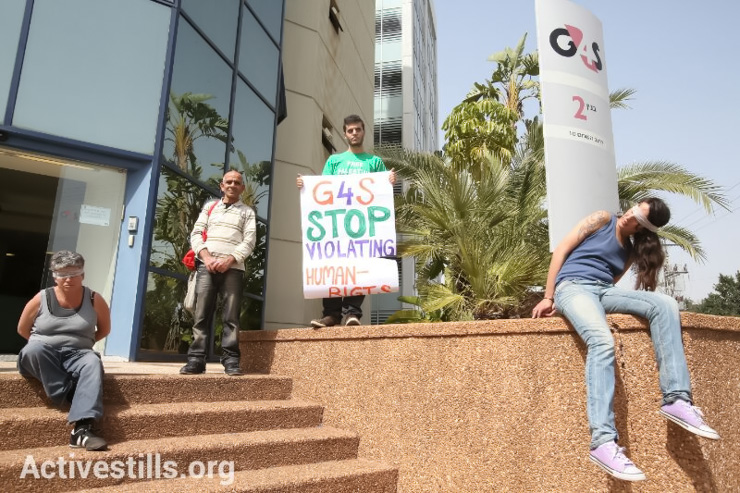 Activists hold a direct action in front of G4S security company offices in Petah Tikva, Israel on March 13, 2013. The activists were protesting G4S involvement in the occupation. (Photo by: Yotam Ronen/Activestills.org) 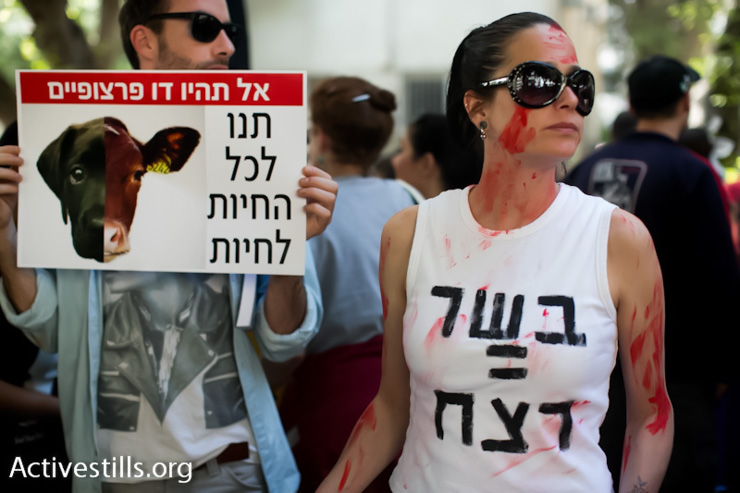 Animal rights activists hold a demonstration in the center of Tel Aviv, Israel, on March 8, 2013. (Photo by :Yotam Ronen/Activestills.org) Palestinians demonstrate against the Israeli settlement of Shavi Shomron. One of the most serious problems facing the Palestinians in the area is the sewage water flowing from the settlement to the farmers’ agriculture lands. Sebastia, West Bank, March 8, 2013. All Israeli settlements in the occupied Palestinian territories are illegal under international law. (Photo by: Ahmad Al-Bazz/Activestills.org) 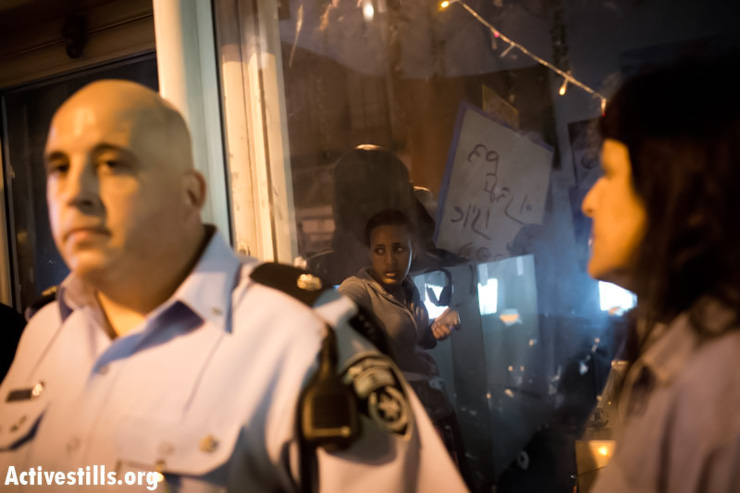 An Eritrean women seeks safety inside an internet cafe owned by immigrants, as police stand guard outside, after Israeli protesters tried to brake in during a protest against African immigrants in south Tel Aviv, March 13, 2013. The protest was held after an African immigrant allegedly broke into a house in south Tel Aviv, stole a phone, and stabbed an Israeli woman earlier that day. (Photo by: Oren Ziv/ Activestills.org)