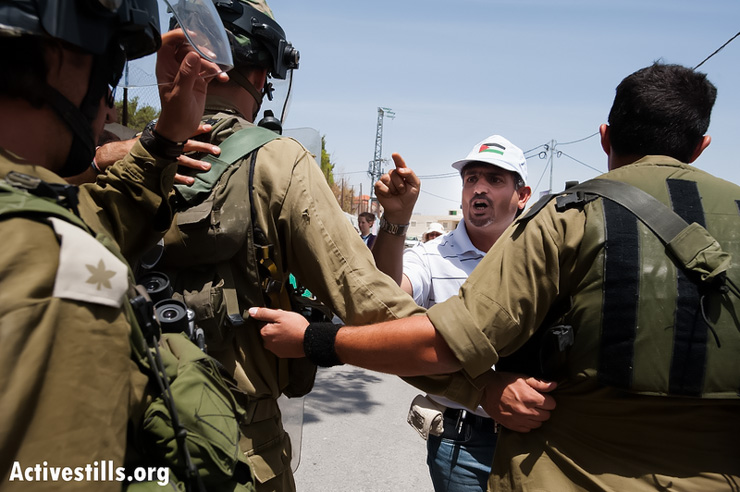 Palestinian activists confront Israeli soldiers during a weekly demonstration against the occupation and separation wall in the West Bank village of Al Ma’asara, May 24, 2013. The Israeli separation wall, if built as planned, would cut the village off from its agricultural lands. (Photo by: Ryan Rodrick Beiler/Activestills.org) 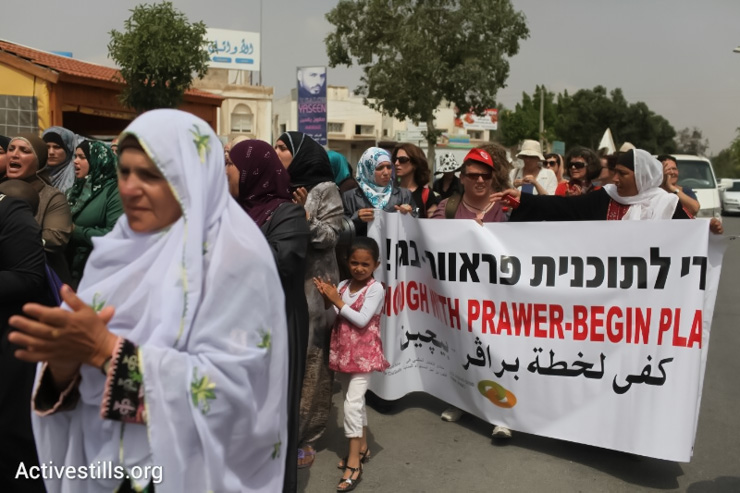 Rahat and Al Arakib residents together with Israeli activists, shout slogans against the upcoming decision to approve the Prawer Plan, Rahat, Israel, May 25, 2013. (Photo by: Oren Ziv/Activestills.org) 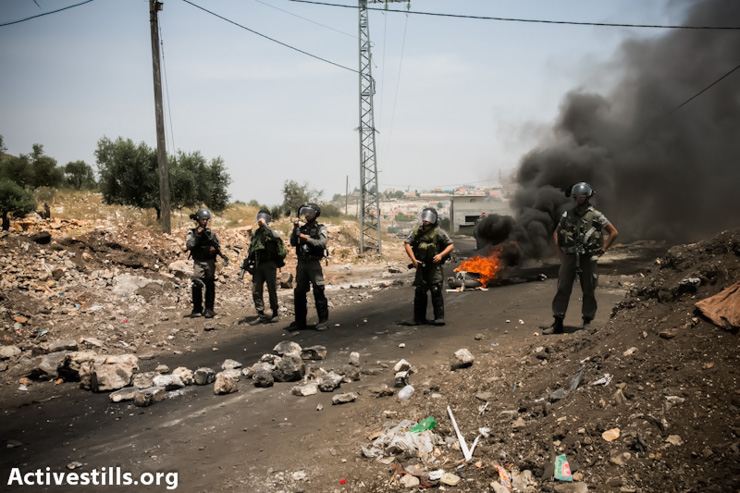 Israeli border policemen stand near a burning barricade after they invaded the village, during the weekly demonstration in Kfer Qaddum, a West Bank village located east of Qalqiliya, on Friday, May 24, 2013. Kfer Qaddum started to organize regular demonstrations in July 2011 to protest against the blocking of the main road east of the village which used to link it to Nablus. (Photo by: Yotam Ronen/Activestills.org) 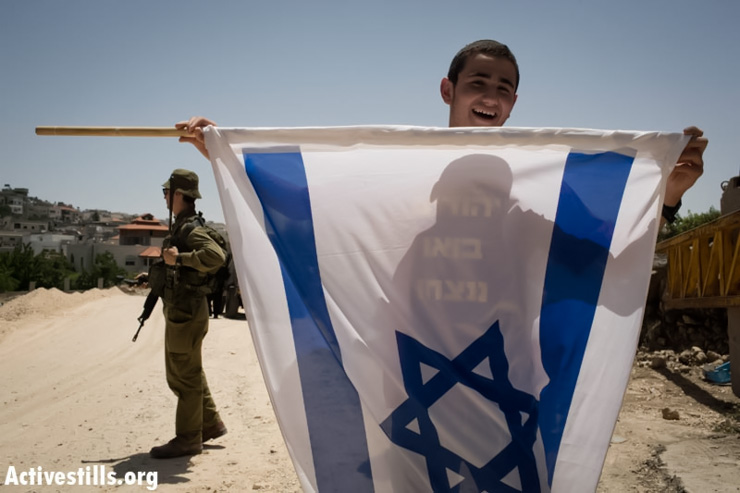 An Israeli setter holds an Israeli flag as soliders stand at the entrance to the Al Aroub refugee camp, near Road 60, during a protest by Israeli setters calling on the army to change live fire orders, and to shoot live ammunition at any Palestinian throwing stones, May 24, 2013. (Photo by: Oren Ziv/ Activestills.org) 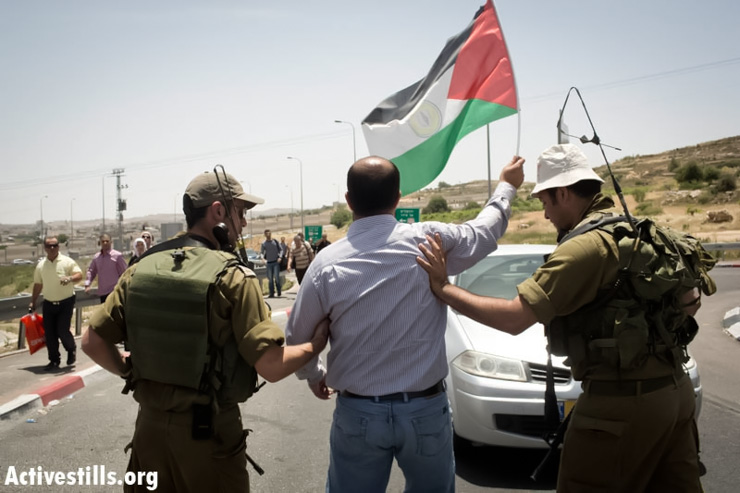 Israeli soldiers push a Palestinian man, blocking a car full of Israeli setters during a protest against the Israeli occupation and settlements near the West Bank village of al Hade, near road 60, May 24, 2013. Earlier that day, Israeli setters protested in the area, calling to the army to change its live fire orders, and to shoot live ammunition at any Palestinian throwing stones. (Photo by: Oren Ziv/ Activestills.org) 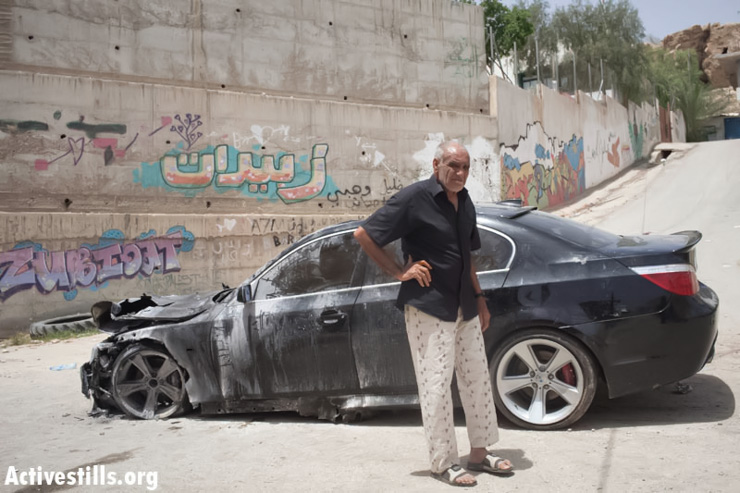 A Palestinian man from the West Bank village of Az-Zubeidat in the Jericho region, stands next to his car that was vandalized by Israeli settlers on May 29, 2013. Five other cars were set on fire in the village and graffiti reading “30 days Eviatar,” was sprayed all over, referring to the Israeli settler Eviatar Borovzky, who was stabbed to death by a Palestinian a month ago in the West Bank. (Photo by guest photographer: Tali Mayer/Activestills.org) 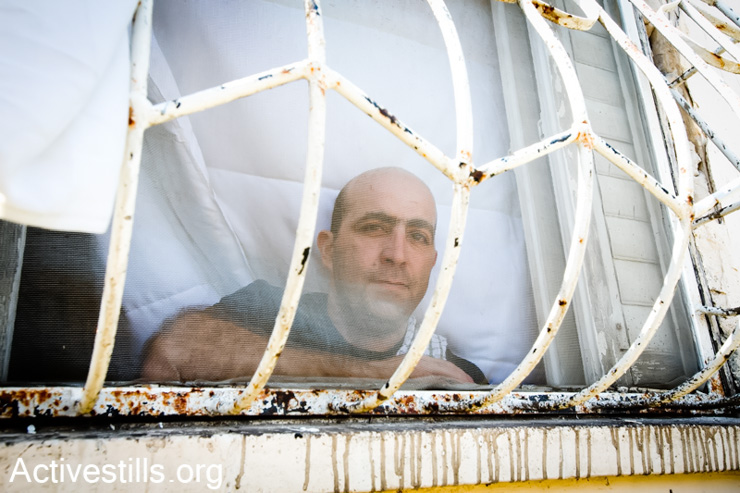 Itzik Menashe, of Givat Shmuel, barricaded him self in his house on May 26, 2013. An eviction warrant was issued to Itzik and his wife Lili, and activists and neighbors gathered in the early morning hours to resist the expected eviction and show solidarity with the family. (Photo by: Yotam Ronen/Activestills.org) 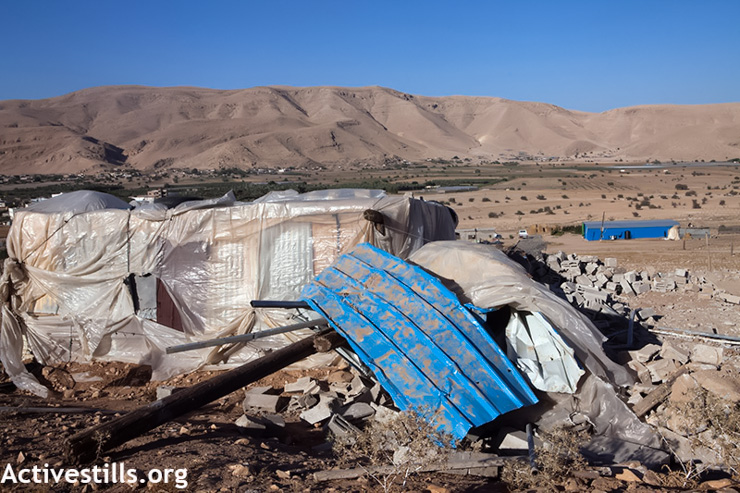 Ruins of the home belonging to Rashid Salem Salama Rizat, demolished the previous day by Israeli authorities in the small village of Al Jiftlik, Jordan Valley, May 28, 2013. The home was rebuilt just one year ago. Thirteen Palestinians were displaced as a result of the demolition. The small community of Al Jiftlik suffers from frequent demolitions by the Israeli authorities. Many of their homes, sheds and animal pens are consistently demolished and their water wells sealed as part of the ongoing campaign to displace the Palestinians from the Jordan Valley. (Photo by: Anne Paq/Activestills.org) 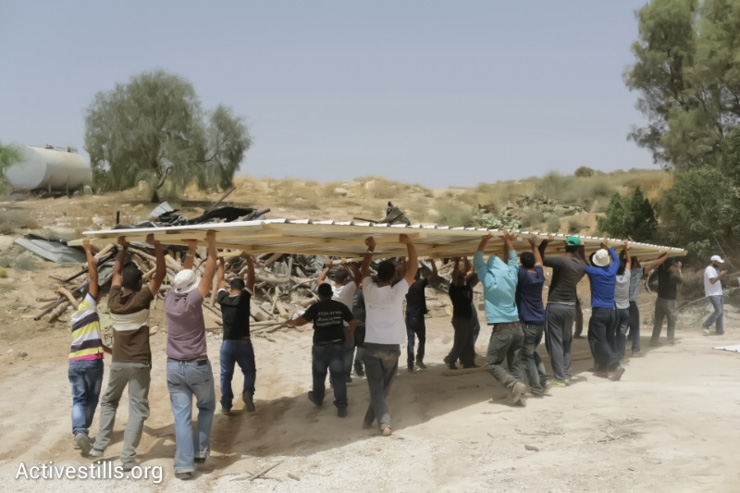 Activists and local residents rebuild a house in the unrecognized village of Atir, in the Negev desert, after 15 houses were demolished by the Israeli land administration two weeks ago, May 25, 2013. (Photo by: Oren Ziv/ Activestills.org) 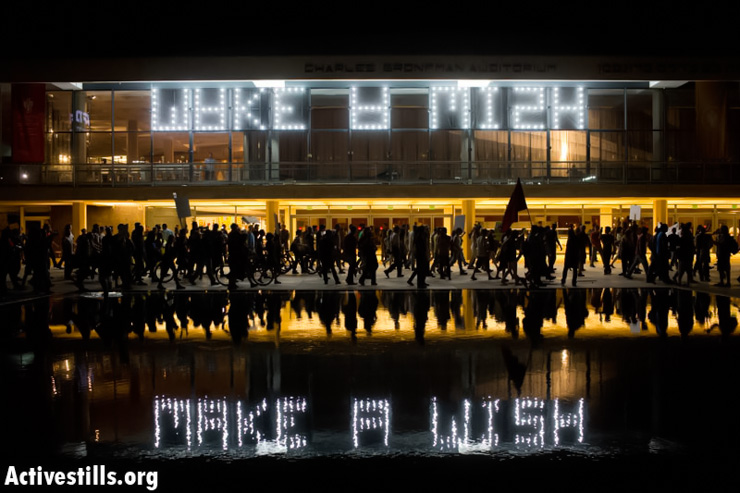 Demonstrators march in Habima Square in Tel Aviv, during a protest against the privatization of natural gas found in the Mediterranean Sea, May 25, 2013. (Photo by: Oren Ziv/Activestills.org) 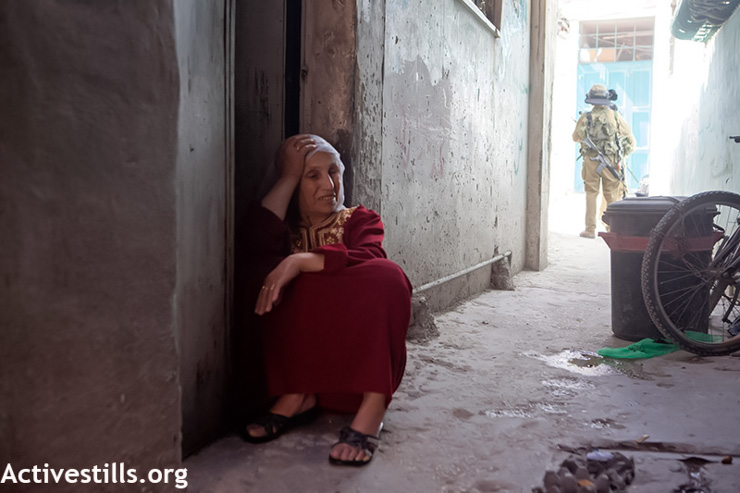 A Palestinian woman suffering from tear gas inhalation sits in front of her home while Israeli soldiers invade the Al Aroub refugee camp during clashes with Palestinian youth, May 24.5.2013. For several weeks the Israeli army has repeatedly invaded the camp to arrest several youth. (Photo by: Anne Paq/Activestills.org) 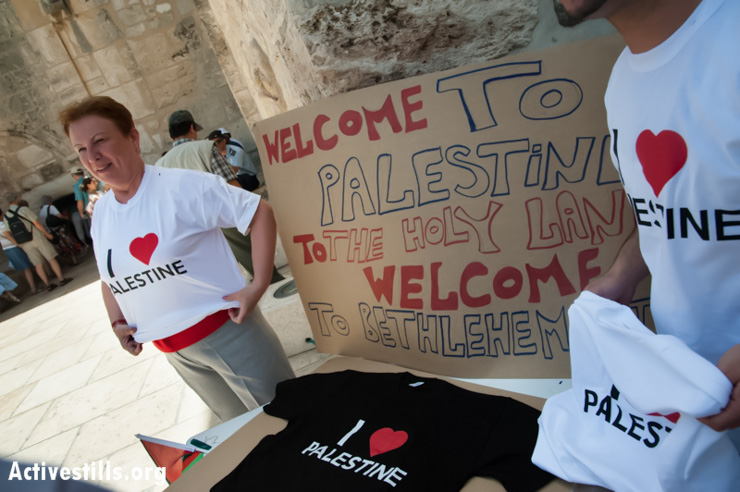 Palestinian activists distribute free “I Love Palestine” T-shirts to tourists in front of the Church of the Nativity in Manger Square, Bethlehem, West Bank, May 24, 2013. The action aimed to raise awareness among foreigners that Bethlehem is not in the State of Israel, as it is often presented in maps and other tourist materials. (Photo by: Ryan Rodrick Beiler/Activestills.org) 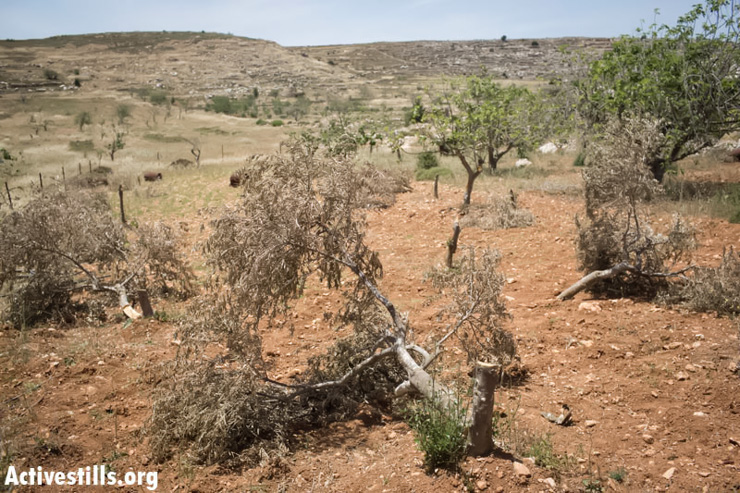 Olive trees owned by Palestinian residents from Deir Jarir and Silwad were cut down by Israeli settlers in one of their attacks after taking over a stone structure and turning it into a new outpost, in the West Bank village of Deir Jarir, May 23, 2013.
Israeli settlers set up a new outpost on Palestinian lands a few weeks ago, attacking Palestinian shepherds and their flock, burning the Palestinian residents’ cars and cutting down trees. The villages of Silwad and Deir Jarir started to organize weekly protests against the new outpost. (Photo by: Oren Ziv/ Activestills.org) 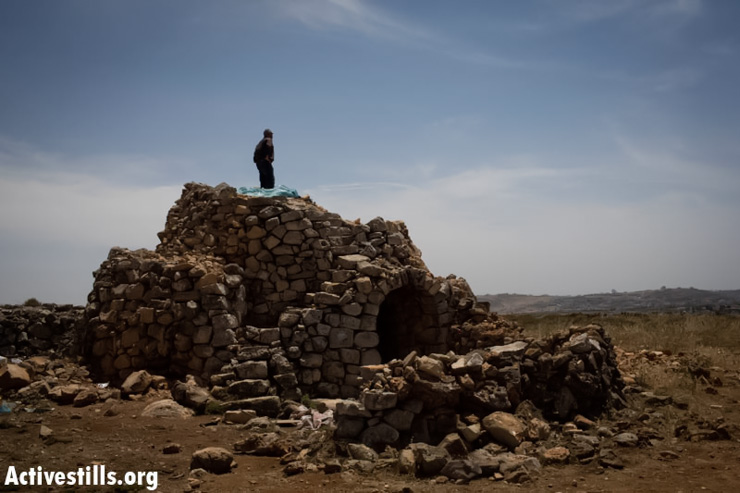 A Palestinian man stands on top of a stone structure, used by Palestinian farmers in the area, which Israeli settlers took over a few weeks ago, in the West Bank village of Deir Jarir, May 23, 2013. (Photo by: Oren Ziv/ Activestills.org)