‘There have been no institutions, no organizations for Palestinian workers within Israel to defend their rights.’ A young labor union is resisting exploitation and defending the rights of Palestinian citizens of Israel, with a focus on the rights of women workers. 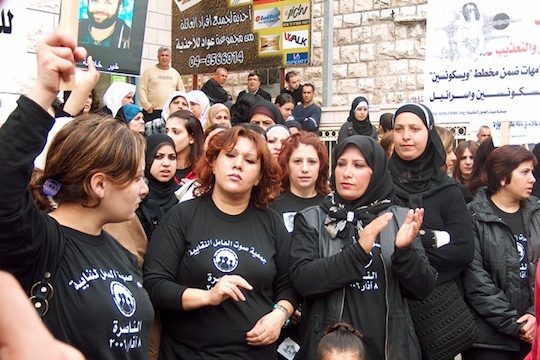 NAZARETH – Security cameras and a heavy metal door secure the otherwise inconspicuous apartment. This is the office of the Arab Workers Union in Israel (AWU). Photographs of local demonstrations and flags of international trade unions drape the interior walls. Wehbe Badarneh, 43, from the village of Arabah, is the general secretary of the trade union. He prepared coffee over an open gas stove and offered freshly baked pastries. Fadwa Ali, 42, of the village of Kaukab Abu Al-Hija, arrived shortly after. Fadwa is one of the main organizers of the Women’s Platform, an affiliated section of the AWU. We sat down to discuss issues effecting Israeli Palestinian women workers, and the trade union’s related activities.

The AWU in Israel is a young, independent trade union which primarily organizes and defends Palestinians citizens of Israel who work in factories in Nazareth, Haifa and the Galilee, along with women working in agriculture. The trade union is run solely by volunteers and relies on donations from trade unions internationally in order to sustain itself. It runs awareness campaigns to inform Arab workers of their labor rights, organizes them across workplaces, and provides legal representation in labor courts.

The Women’s Platform is the largest section of the union, dedicated to promoting the rights of Arab women workers. Fadwa spoke of pervasive work-related problems affecting Arab women, explaining that “many are simply unaware of their labor rights, or are too afraid to organize and to demand their often legally entitled rights.”

The situation endured by the Palestinian indigenous minority of Israel is one of systemic hardship and inequality. “Arab workers across Israel experience a culture of exploitation, we see and hear that every day from the people who come into the office to complain against employers,” said Wehbe.

Over half of all Arab families in Israel are classified as poor, while between one-fourth and one-fifth of the general population of Israel lives below the poverty line. Approximately 21 percent of Arab women in Israel are employed, in contrast to roughly 60 percent of Jewish women.

Despite an gradual increase in recent years, Arab workforce participation rates among women in Israel are lower than the entire Middle East, barring Yemen and Palestinian women in the occupied Palestinian territories. Even Saudi Arabia has a higher female employment rate, of 22 percent.

The agricultural sector, formerly a large source of employment for Israeli Palestinian workers, has been dominated in recent years by Thai migrant labour. Arab women who manage to find work in agriculture can expect to earn roughly NIS 80-100 shekels for an eight-hour day – that’s roughly $20 to $25, well below the minimum wage.

“Arab workers built all the Israeli towns, from Eilat to the Galilee,” exclaimed Wehbe. But most Arab communities find themselves on the geographic periphery, far from prosperous centers in Israel. A total of 97.6 percent of all industrial zones are in predominantly Jewish areas.

Fadwa spoke of how official statistics don’t reflect the true extent of exploitation. The AWU has documented numerous employers declaring to tax authorities that they pay employees minimum wage, while underpaying through cash in hand. A reported “87 percent of women working in locally run cafes in Nazareth do not earn the minimum wage” said Wehbe. The Women’s Platform works on a community level on such issues.

The AWU seeks to make a difference on a number of fronts, from retrieving workers’ unpaid wages to helping overthrow the Wisconsin plan, a localized welfare-to-work program, in which the government outsourced the provision of certain welfare benefits to private companies and left many without income support.

The case of Ms. Awwad is but one example of the AWU successfully defending Arab women workers. Like many other single women in their 20s in the Galilee, she had only ever found temporary work in factories. Ms. Awwad had worked eight months in a dairy factory in Shimshit near Nazareth, on an hourly wage of NIS 11 ($2.83), while the Israeli minimum hourly wage was NIS 22.95. On her behalf, the AWU filed for financial compensation through the Nazareth Labor Court. In October 2011, the court ruled that her former employer had to compensate Ms. Awwad NIS 7,500, the extra amount she would have received had she earned minimum wage. 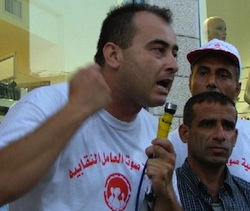 Despite the few but significant legal victories, “The main activity is to establish local committees of workers that are linked to the Union.” Wehbe reiterated that the AWU prefers not to focus on legal battles in labour courts, or to invest scarce resources on lobbying the Knesset. They instead dedicate their activities to informing workers of their labor rights, and in establishing a network of local worker committees across the region. “We normally get thrown out of the factories as we hand out leaflets informing workers of their rights,” he said.

Lacking the funds for large-scale promotion, support for the AWU comes as a result of word of mouth and through cultivated interpersonal relationships. “We hold lectures for women in their homes,” says Fadwa. “Our experience with women in the past years shows us that this work is important, because working women are not aware of their rights.” As a result of such initiatives, “there are small factories with 70 to 80 working women across the Galilee that now have local committees for the women who work there.”

Factory administrations have used various methods to try and undermine this small but growing network of committees and any attempts by them to collectively bargain. Wehbe explained that factory and agricultural bosses have argued that only the Histadrut, Israel’s confederation of trade unions, has the right to organize workers. This despite the fact that the Arab Workers Union has a member majority in these workplaces, legally entitling it to engage in collective bargaining as is dictated by Israeli labor law.

The Arab women of the Galilee have suffered greatly from the mass outsourcing of production to neighbouring countries. In the past decade alone, over 30,000 textile workers in the region have lost their jobs. Neo-liberalization policies spurred the new high-tech based economy, and displaced traditional employment sectors in Israel. As part of the Middle East peace process in the 1990s, Israeli textile factories closed down in the Galilee and were outsourced to Qualified Industrial Zones in Jordan, which provide cheap labor and tax and quota-free export to the United States for Israeli and Jordanian companies. These economic initiatives were promoted as a way to increase so-called regional normalization. In reality, they entrenched domestic inequality, and seriously damaged the already fragile economic position of Palestinian women within Israel.

Fadwa described the closure of a local Nazareth textile factory. “One day, the women came to work and everything was closed, no salaries, no pay.” Closed without any notice, the factory’s former employees never received any severance pay despite demonstrations and appeals. Fadwa says there are other similar cases throughout the Galilee.

Fadwa and Wehbe remain resolute in their commitment to an independent trade union among Arab workers. Palestinian communities across Israel realize that “There have been no institutions, no organizations, for Palestinian workers within Israel to defend their rights,” according to Wehbe.

The model of the Arab Workers Union, and of similar organizations, offers a seldom discussed alternative for workers across Israel and the occupied Palestinian territories. It just may begin to instill a confidence and an organizational capacity among the Palestinian citizens of Israel for wider political collective action. “We are not an organization of lawyers, we prove to workers why it’s important to be organized. If we go to the labour courts it can take months or years. If we are organized, we can strike and win,” Wehbe says.