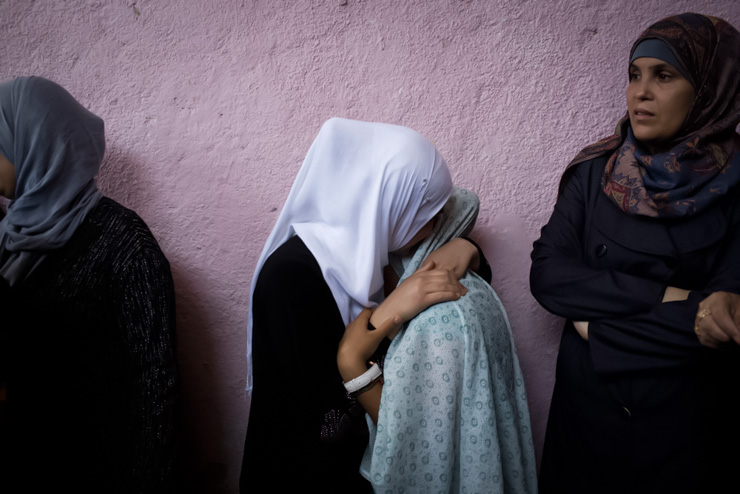 Relatives of of Jihad Aslan mourn during his funeral at Qalandiya Refugee Camp near the West Bank city of Ramallah, August 26, 2013. In the early hours of August 26, an undercover unit of the Israeli border police entered the refugee camp and tried to arrest a wanted Palestinian man, but the force was discovered by the residents, who clashed with the soldiers. During the clashes, three Palestinians were shot to death: Yunis Jahjouh, 22, Rubeen Abed Fares, 30, and Jihad Aslan, 20. According to Palestinian medics, 19 others were injured. (photo: Oren Ziv/Activestills.org) During the funeral for three Palestinians killed by Israeli forces, members of the Al Aqsa Brigades shoot in the air as they stand in the graveyard in the Qalandiya Refugee Camp near the West Bank city of Ramallah August 26, 2013. (photo: Oren Ziv/Activestills.org) Palestnian youth climb on the Israeli wall and throw stones at Israeli army, during clashes following a funeral in Qalandiya Refugee Camp near the West Bank city of Ramallah August 26, 2013. (photo: Oren Ziv/Activestills.org) Sheik Sayah Aturi, a resident of the unrecognized Bedouin village of Al Arakib, sits in a Beer Sheva court, before a hearing, August 27, 2013. Four residents of Al Arakib were arrested following a demolition of the village, as they were trying to rebuild a tent demolished by the Israeli authorities. The police claim there were illegally squatting on their own land. (photo: Oren Ziv/Activestills.org) A volunteer organizes bags with food products during a food distribution for poor families ahead of the Jewish holiday marking the new year, South Tel Aviv, 28.8.2013. (photo: Oren Ziv/Activestills.org) Palestinian youth, one of them wearing a Guy Fawkes mask, take cover during the weekly protest against the Israeli occupation in the West Bank village of Nabi Saleh, August 23, 2013. (photo: Oren Ziv/Activestills.org) Youth suffering from tear gas shot by Israeli soldiers take cover during the weekly demonstration in Kfer Qaddum, a West Bank village located east of Qalqiliya, August 23, 2013. Kfer Qaddum started to organize regular demonstrations in July 2011, protesting the blocking of the main road east of the village which used to link it to Nablus. (photo: Yotam Ronen/Activestills.org)