A Palestinian refugee from Gaza journey’s to his family’s hometown in present-day Tel Aviv. Standing on what used to be the village cemetery, he feels the ghosts of the past as he must reckon with the currently reality.

On International Human Rights Day, he took advantage of his basic rights and returned to Salameh, which today is known as Kfar Shalem. It is the first time he has visited the place where his parents were born. His father was born in 1936 and was 12 when he, along with the rest of the residents of the town, was forced to leave his home and move to the Gaza Strip where they still live today. I won’t mention his name so as not to endanger him.

He’s excited as we make our way to Salameh, growing quiet for a long time as we go from the village mosque and the mukhtar’s house. He spends some time on the exercise equipment in a local playground while his four-year-old nephew plays on the slides. The playground was erected on Salameh’s cemetery, of which nothing remains. 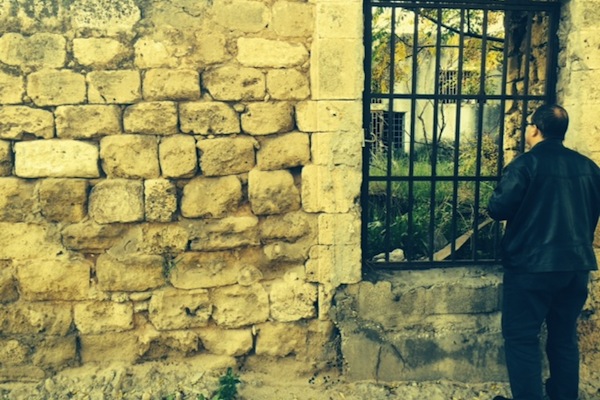 The son of refugees from Salameh stands outside the village mosque. Today Salameh is known as ‘Kfar Shalem’ and is part of Tel Aviv. (photo: Eléonore Merza)

When we arrive at the mosque he calls his father. Even before he tells him where is, his father asks whether he has already visited Salameh. He tells his father that although the village in which he was born has become a neighborhood in Tel Aviv, some of the original buildings and the winding village streets preserve its memory. His father doesn’t speak at length. “It must not be easy for him,” he says and asks me about the village school. His father, who had been a pupil there, asks whether it’s still standing. I take him to the school which today houses the offices of the National Insurance Institute. When the construction plans are complete and the remaining residents who currently live in Salameh’s buildings are evacuated, only the mosque will remain. Its dome was damaged by rioters in 2000 and has yet to be repaired.

I tell him about the struggles of the neighborhood’s residents, almost all of them Mizrahis, against their eviction by both the state and Israeli capitalists. We pass a ruined house on Street 4848, where a resident died as a result one of these violent incidents. I have no idea how much this interests him.

They slept in our house in Tel Aviv – only an hour’s drive from where they live today (assuming there is no delay at Erez Crossing), but based on his reactions it seems like a parallel universe. He is astonished by the variety of fruits and vegetables in the Carmel Market, not to mention the prices, which are double those in Gaza. Together we sit down in front of the television to watch a Champion’s League soccer game. “We also have a set like that, but the recent attack on Gaza destroyed it as well,” he notes bitterly. That gives him the opportunity to tell about their living conditions. “Palestinians in Gaza build their homes the same way they raise children. It never ends because they must continually rebuild after the destruction caused by Israel. After we finished building a new section of the house, the summer attack destroyed all the doors and windows. A tank shell penetrated the kitchen, destroyed the stove, the refrigerator and the range hood.” 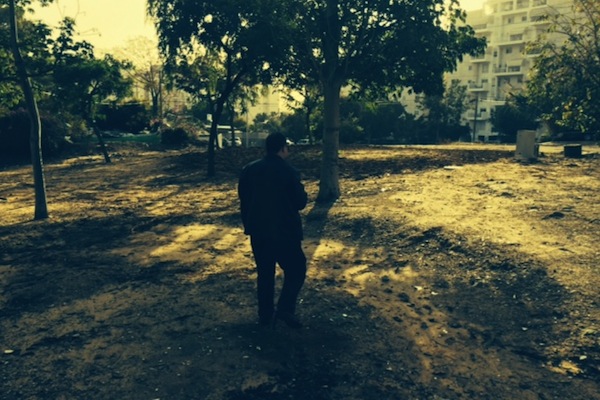 The son of refugees from Salameh returns to his family’s village. (photo: Eléonore Merza)

“Where were you at the time?” I ask, assuming they’d found shelter in a safer location than their home. “We were at home,” he replies. “It’s very expensive to live somewhere else, we didn’t have the money, and for the entire family to live in an UNWRA school would be unbearable so we decided to remain home.” The non-material damage can only be imagined, based on what he is willing to share with us.

The conversation meanders between the horrors in Gaza and the fascinating soccer game on the screen. Basel is subsituted for an Egyptian player, he tells me. Gerard scores a great goal and for a moment it seems Liverpool will move up to the next round. My wife Eleanore wants to photograph us pretending to be happy about the goal. We agree willingly and both laugh, trying to forget the difficult day. He is well-informed about European and African soccer teams and is a Barcelona fan. “Like your son, as I saw in his bedroom,” he says. “When Barca plays Real Madrid, Gaza splits into two camps,” he adds an important detail. This human moment lasts, and the atmosphere is pleasant. The tense end of the game connects us, two fairly typical soccer-loving men. I tell him that Sosa, the fidgety coach giving instructions to the Basel players, led Maccabi Tel Aviv to the championships last year. “But you seem to want Liverpool to win this game,” he says. “I don’t really care who wins, I just want to see a good game.”

When we part the following day his nephew is happy to return home and we hug warmly on the corner of Allenby and Mazeh in central Tel Aviv. The taxi driver understands very well what is happening and concludes: “It’s a cruel world.”

Eitan Bronstein Aparicio is the founder of Zochrot. This article was first published on +972′s Hebrew-language sister site, Local Call. Read it in Hebrew here.