Those who spot an existential threat at every turn, turn their backs on diplomacy and mock peace efforts are now astonished to find that the enemy has sought out their own weapons of attack. The tunnels are a self-fulfilling prophecy; the time has come to look for another way.

It is heartrending and frustrating to see us, citizens of a country full of accomplishment and potential, repeatedly stupefied by a cynical propaganda machine whose real intent is simply inaction. What is meant by “inaction”? To avoid putting forth any solution, to not present any creative initiative or new idea, to weaken the moderates, to blur the lines between them and the radicals, to build settlements, and to always focus on the sacred strategic triangle: scaring, explaining, evading.

A few years ago, during the Second Intifada, buses and restaurants here in Israel exploded incessantly. Thousands of people died on both sides. Fatah came to the realization that the violence of the Second Intifada was harming Palestinian political efforts. It was a profound soul-searching that, of course, most Israelis never learned about. Years of quiet in the West Bank, of non-violent protest, shared security operations and a Palestinian president who views military cooperation with the occupying power as sacred, and who pays an enormous price for it at home – these years did not lead to the end of the occupation. Quite the opposite: The occupation only branched out and grew stronger. 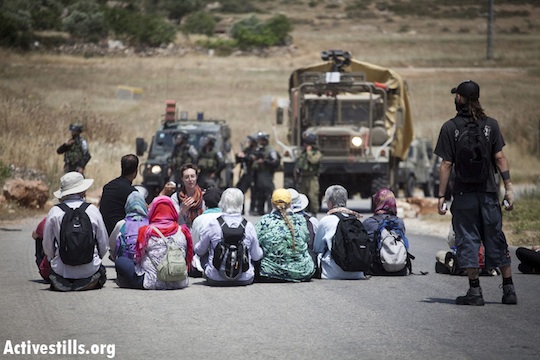 Demonstrators sit in front of the “Skunk” water canon, during the weekly protest against the occupation in the West Bank village of Nabi Saleh, May 18, 2012. (Photo by: Oren Ziv/ Activestills.org)

Was anyone in Israel paying attention? Of course not. Because during those years Abu Mazen and the Palestinians didn’t interest us. All their desperate calls for an end to the occupation seemed like an ancient remnant of a matter that once bothered us long ago. After all, at the time we were all obsessed with another far more fateful subject: Iran. A strike in the summer or the fall? Maybe with the birds in spring? A secret interview with a Ehud Barak, terrifying scenarios of a nuclear doomsday, how many will die on the Israeli side during the counterattack?

Let’s recall that summer when we woke up every day knowing that today we would strike Iran. And on the occasions that we did deal with Abu Mazen, he was presented to us as an enemy of Israel who wants to humiliate us in the UN, who dares, in his insolence, to seek recognition for a Palestinian state. How dare he? Ministers called him a terrorist, hardly different than Hamas. But it’s worth repeating this point: For years Netanyahu and his ministers explained to us that Hamas and Abu Mazen were two sides of the same coin. Today in order to justify the war, they clarify just how different they are, stating that Hamas is the very incarnation of Satan.

Why did they dare offer such blatant lies? Because in Israel one doesn’t pay a price for such revolting lies. Only when people criticize the indiscriminate killing of Palestinian children, then they pay a price.

Suddenly Iran was gone. The existential threat that must always flicker in the Israeli sky faded away, to the great disappointment of the prime minister, who held onto it in every possible way. And with Iran everything disappeared: the threats, Ari Shavit’s sickening articles, the question of a summer or winter strike, casualties, the price, doomsday.

Suddenly John Kerry arrived with demands for negotiations with Abu Mazen – a challenging moment for the government and the sycophantic media, one that threatened to break the cycle of scaring, explaining and evading.

The peace negotiations took place while Israel was building in the West Bank at a berserk pace and violating the few obligations it had agreed to. Of course, this too didn’t interest anybody. Netanyahu was diligently engaged in evading and explaining, in weakening Abu Mazen, in slandering him, correlating him with Hamas, bringing up his doctoral dissertation and turning him into the enemy of the people because of a speech in the UN in which he spoke the truth – any means necessary to evade what is necessary. 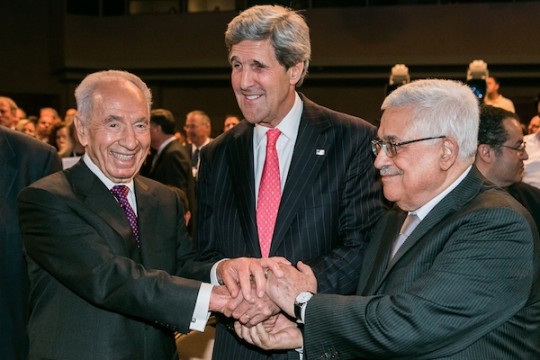 No one in the Israeli media or public really asked: Wait a minute, what the hell are you doing? Where are you leading us? Could you be committing a crime against the Israeli people? Could you be condemning us to more years of war, offensives and death? After all, you had sworn to our citizens to turn over every stone on the path to peace. Is there a single person in Israel who actually believes that Netanyahu has turned over every stone, that he has lifted even one stone? There are no special television reports about this type of fraud, no panels of sober-faced experts who wonder why we are not implementing some brave initiative, who ask why, even now, in negotiations with a moderate Palestinian president who objects to violence do we still drag our feet, miss chances and thwart progress.

When the unity government with Hamas came together on the principles that Abu Mazen laid out, a government that in fact gave most of the authority to his people, Israel took advantage of the opportunity and ended the peace talks. Finally the threat of negotiations was lifted. Nobody said: Just a minute, maybe this is the chance, Hamas has been weakened, Abu Mazen has grown stronger; maybe now, with the unified government, we can talk to Abu Mazen and put forth a real offer for end the occupation, and see what he is able to produce? One can always return to war. Maybe it’s this path that can stop the rockets against the south of Israel; after all, every other attempt to stop them has utterly failed. Maybe, just once, we should try something different? Certainly not. For Israel, every event is a reason to return to the old pattern of scaring, explaining, evading.

Of these three, the most important principle for the establishment and the media is the scare tactic; it’s the real bedrock of our existence. So, now come the tunnels – the new existential threat that takes the place of the Iranian bomb. The panic drill is back: Whole cities have been built underneath the earth meant to lead terrorists from Gaza to Israeli cities, to instigate the kidnapping of an entire kibbutz, and afterwards maybe the city of Ra’anana. The new doomsday is no longer a nuclear holocaust from Iran, but thousands of terrorists emerging from tunnels and kidnapping all of Israel.

A tunnel in the Gaza Strip (Marius Arnesen, Flickr)

This is not to belittle the threat posed by Hamas. But it’s crucial to keep in mind that if, in the past few years, Hamas had wanted to blow up a bus in Haifa or Beersheba – really wanted, as it once did – then it would have happened. And if Fatah had wanted to do so, it also would have happened. There is no need to dig a tunnel from Gaza to achieve that outcome; it is enough to leave on foot from Hebron or Nablus. It is true that the tunnels are a weapon meant to transport fighters underneath the fence; but from that point to the idea of fantastical horror films, and conflating an offensive weapon in enemy hands with an existential threat for the whole state of Israel is an enormous distance.

As long as we define our status as war, the other side will find ways of hurting us.  Therefore, there are two possibilities: The first is that it’s impossible to do anything except fight and stand our ground. The second is that Israel, an exceedingly powerful state, can change the reality of the region and end the occupation.

Those who believe in the first possibility stand steadfast with Netanyahu anyway. The thing is, most Israelis haven’t yet decided their precise position. Some believe more or less in the second possibility, and the aim of Netanyahu’s propaganda is to make them stop believing that it is possible to actually do anything. They will use any means necessary to stop Israelis from believing in the existence of another prospect aside from “standing steadfast.” The basest manipulations are employed against us so that we believe this lie. Sadly, the spineless Israeli media furthers the administration’s aims: It echoes every threat, applauds each military operation, lessens each blunder and refrains from asking the truly tough questions.

The template is clear. For the most part, there will be an existential threat flickering above the skies of Israel, nourished by the establishment and the media: terrorist bombings, rockets, the Iranians, the tunnels. And whenever there is no threat of this sort, we’ll engage in evasions and explanations until we manufacture a new threat.

The question is how do we oppose the “no choice” factory built by the establishment and the media? How do we effectively convince people that this operation in Gaza and the circle of death and despair into which we have been crammed are not the edict of fate? How do we convince everyone who loves this place, believes in its potential and wishes for its welfare that we don’t have to live this way?

Nir Baram is an Israeli author

Lovely summer for a war
The ‘terror tunnels’: Another Israeli self-fulfilling prophecy
Not about tunnels: Israeli tanks take aim at central Gaza