On a day trip through Israel, one truly understands how close the country is to the great cities of the Middle East. Unfortunately, distances here aren’t measured by kilometers, but rather by border crossings.

Sometimes I think that the greatest tragedy of this place is not what it has become, but what it could have been. The greatest rupture in the Middle East was the destruction of the train route from Alexandria to Istanbul – precisely where Israeli existence takes place, spatially and linguistically. “From Yaffa to Beirut,” a tour put on by Zochrot, an Israeli NGO dedicated to raising awareness of the Nakba, attempted to fill the gap created by this rupture. The tour seeks not only to mark the old border, but aspires to cross and do away with it.

The day starts in the ruins of Manshiyya, the border between present-day Tel Aviv and Jaffa, near the Hassan Bek Mosque and a museum dedicated to the Irgun, a right-wing Zionist militia. I decide to sleep in and join the tour just as it is about to head north. On the bus, people share stories about the Middle East of the past; they tell of a space characterized by movement, about grandfathers who drove from Tulkarem to Syria to sell their melons and about Jews who studied in the University of Beirut, where my grandmother studied.

We reach Caesarea, nearly halfway between Tel Aviv and Haifa, where the tour is based on the story of 87-year-old Abu Naim, a Palestinian refugee who currently resides in Jenin. 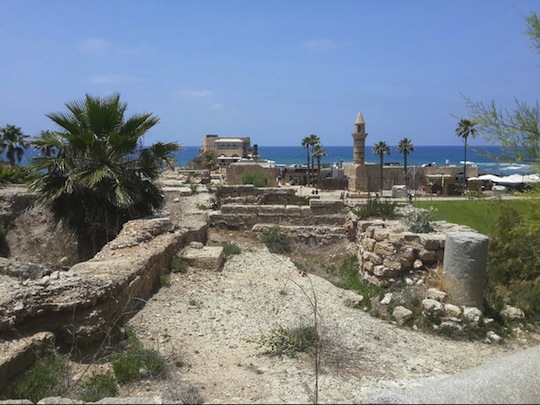 The occupation of Caesarea began on February 15, 1947; it was the first village to be demolished during the Nakba. According to Naim, the residents of the village were locked in the church and couldn’t tell what was going on – they could only hear explosions coming from outside. When the destruction was over, they came out to find that there was nothing left of their village. People escaped to the village of Tantura or further north. Some traveled east to Arara and Jenin.

Read: What happens when a Palestinian-Israeli travels to Beirut?

We walk amidst the archeological excavations and the souvenir shops. These same shops used to sell fishing equipment before 1947. The Palestinian history of Caesarea is not buried underground – the shreds that have not been swept away remain scattered above it.

We walk from the schoolyard to the mosque that was later turned into a restaurant (until a long struggle forced it to close down), to the remnants of the church. We conclude by the ruins of Abu Naim’s house, where we hear about the gold coins that lay underground, which the Brits prohibited the locals from digging.

We return to the bus and leave the seaside town, driving up to Kafr Bir’im, near the border with Lebanon. On November 19, 1948, an Israeli military commander and two soldiers came to the village, only to find that its residents hadn’t fled. 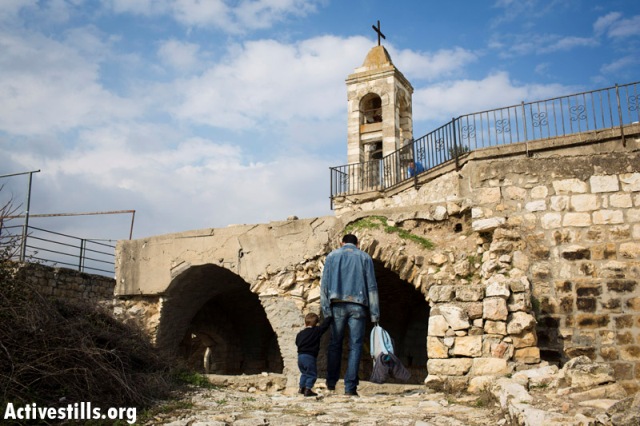 Church of Our Lady in Bir’im. (Oren Ziv / Activestills)

Several weeks went by, and toward the end of November the residents of Bir’im were requested by the army and the minister of minorities (who previously visited the village to register its residents as Israeli citizens) to move to the nearby village of Jish, while they sealed the border and conducted military exercises in the area. The villagers have not been allowed to return ever since. A few years later, they sat in Jish and watched the army blow up their homes, one by one. The fact that they were now Israeli citizens changed very little for them. Today, some of the former residents live in Acre, while others in villages in the Galilee. And if that wasn’t enough, Bir’im’s church bell was stolen by members of the Hashomer Hatzair youth group from the nearby Kibbutz Baram, where it is still used today.

Even Israel’s Supreme Court acknowledged the residents’ claims in the years after Bir’im’s destruction, ruling that they should be allowed to return. However, the military prevents any return by continually declaring Bir’im a closed military zone. In addition, the Jewish National Fund has planted trees where the village used to be, and the Israeli Nature and Parks Authority runs an archeological site of an ancient synagogue, which means people need to pay to enter the village. The history of the ruined houses is not shared with the visitors, and the story of the new church bell, made in Lebanon by refugees from the village, also remains untold.

The refugees of Bir’im have maintained contact with their village. Each of their baptisms and weddings have taken place in the local church since the 70s, and summer camps for children take place on the village’s land every summer. The cemetery has also remained in use; “If we can’t return to Biram in our life, we shall return in our death,” say the refugees. But over the past eight months, there is life in the village. Last August, a group of refugees returned to the village and have refused to leave ever since. They take shifts sleeping in the village, hold activities for the children, plant edible plants and try to reconstruct the old structures. The Israel Land Administration is doing everything it can to get in their way, by uprooting plants and handing out eviction notices. 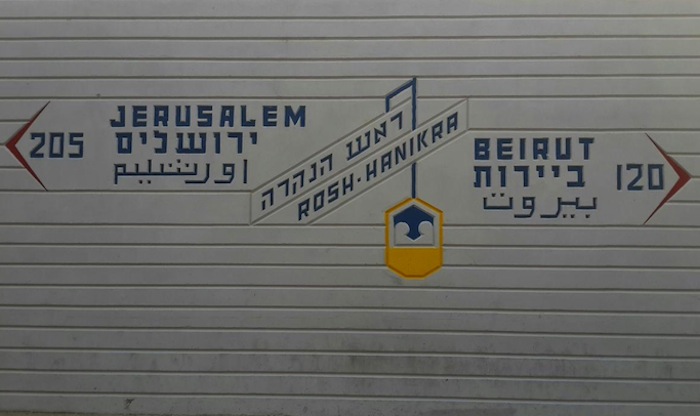 On the border between Israel and Lebanon. (photo: Leehee Rothschild)

We leave Bir’im and end the day in Ras Al Naqura, by the border crossing with Lebanon. Annie Slemrod, a journalist who previously lived and reported in Lebanon, shared with us her recollections of Beirut. She speaks of a lively capital full of bookstores, small galleries and young people on Hamra Street — the intellectual center of the left. She also tells us about a harsh city with water shortages, constant power outages and people leaving for Berlin. Beirut, she says, is a city of refugees: 300,000-400,000 Palestinian refugees scattered among 12 camps across the country. They need a permit to be allowed to work, and even after acquiring one they are still limited to a small list of professions. Most of their lives take place inside the camp; there they live, dream and learn, and teach their children about return.

The sign under which Annie stands shows that Beirut is only 120 kilometers to the north — a two-hour drive, perhaps less. But where we live, distances are not measured by kilometers: they are measured by border crossings. And even as we stand at Ras Al Naqura, Beirut still feels very far away.

Related:
Why the inconvenient truths of the Nakba must be recognized
PHOTOS: Nakba commemorations from Gaza to the Galilee